Queens Check: Leasing Is Strong, but Investment Sales Have Slowed in Queens 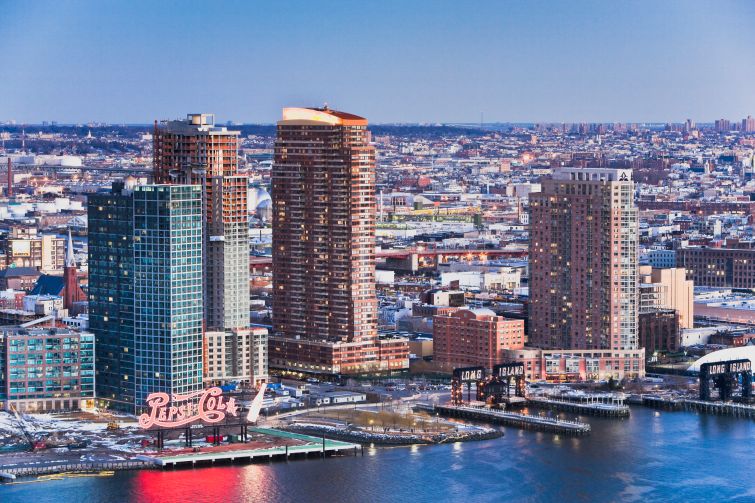 Amazon may have dumped Long Island City, but the neighborhood has still seen healthy leasing activity so far this year, per a CBRE report. Photo: Getty Images

Even after Amazon ghosted Queens in February, the borough had strong leasing activity in the first half of this year. But investment sales have started to slow, experts said.

A CBRE report from July focusing on Long Island City and Astoria found that leasing activity for the first half of this year in the neighborhoods was 558,000 square feet, a 170 percent jump from the 207,000 square feet in the same time last year and a 4 percent increase from the 536,000 square feet leased in the second half of 2018.

“We’ve seen some Manhattan-based tenants take space there,” said Nicole LaRusso, the director of research for CBRE, referring to Macy’s January addition of 300,000 square feet to its 567,000 square feet at The Jacx development and the New York Times Company’s 57,846 square feet deal at Court Square Place in August. “That’s obviously a vote of confidence in the market.”

The report also found that renewal activity slightly increased in the first half of the year compared to the same time last year, from nearly 100,000 square feet to 119,000 square feet.

After Amazon pulled out of its 1.5-million-square-foot commitment at Savanna’s One Court Square, the building bounced back, signing a 329,864-square-foot deal with Centene Corporation in March, a 103,133-square-foot lease with Altice USA in June, and 30,760 square feet with Collins Building Services, also in June.

“Even with the withdrawal of Amazon, it has given the area a boost of more visibility and put it on people’s radar,” LaRusso said. “It’s still attracting a bit of attention.”

Asking rents in Long Island City and Astoria did slightly decrease from $45.52 per square foot in the first half of 2018 to $41.77 per square foot so far this year, the CBRE report found. The availability and the vacancy rates have also both increased in 2019.

More new space is expected to come online as developments finish construction in Long Island City, but LaRusso isn’t worried the neighborhood won’t have enough tenants to fill the space, as is the case in Brooklyn.

“There’s certainly a healthy demand for [Long Island City] space,” she said. “We don’t have a lot of concerns compared to the Brooklyn market where there’s just a lot of space being built at a very high price point and not necessarily all in desired locations as far as transportation goes. So far, the market has been able to absorb it.”

But over on the investment sales side in Queens, things haven’t looked as rosy. Transaction volume in the borough decreased by 16 percent to 271 in the first half of this year compared to the same time last year, while property volume decreased by 21 percent to 330 during the same time, according to a report by Ariel Property Advisors.

“There’s not a lot of urgency on many of the transactions or the transaction process,” said Queens sales guru Stephen Preuss of Cushman & Wakefield. “People are taking a more conservative approach.”

Previously, Preuss could expect to get nearly a dozen offers on properties, but lately only one or two are coming in. Buyers are also much more willing to walk away from a deal if something better comes along.

He added that it’s also taken significantly longer to close sales in the borough because buyers are worried the city’s market could continue to see a downturn.

“There’s no 30-day turnaround on contracts anymore,” he said. “It’s nine months to a year now.”

The rent regulations passed by the state legislature put an “overall ominous tone” in the market — even if properties don’t have rent-stabilized units — and a “complete paralysis” on sales of multifamily buildings with regulated apartments, Preuss said.

“It’s an investment moratorium until [the laws] are fully digested or we go through a little more time until we fully understand the changes,” he said.

The Ariel Property Advisors report found that multifamily activity had 21 percent fewer transactions in the first half of this year compared to the same time last year and 22 percent less properties traded. Pricing per square foot also decreased from $365 in 2018 to $341 so far in 2019.

However, there have been some bright spots for investment sales in Queens. Preuss said quality assets that are priced well still get 10 to 20 offers when they hit the market.

“There’s an abundance of capital,” he said. “There’s people still looking and willing to transact.”

Other strong segments have been the industrial market and development sites — mainly in Long Island City, Maspeth and Flushing — -which have continued to attract buyers, Preuss said.

Industrial sales transactions increased by 36 percent in the first half of this year compared to the same time last year, from 36 to 49, while dollar volume jumped 176 percent in the same time, from about $164,000 to nearly $453,000, according to the Ariel Property Advisors report.

“Most of my value conversations typically end up in Jamaica,” he said. “A lot of people are looking into the Jamaica market.”