It’s legal and a big, um, growth sector, but medical marijuana dispensaries are still taboo for a lot of Brooklyn landlords. And they’re only the beginning of a cannabis operator’s headaches. 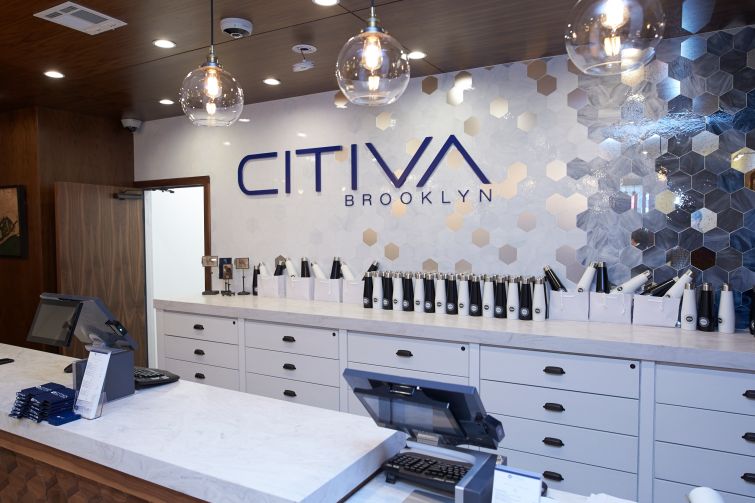 An unassuming passerby wouldn’t know it. That’s by design.

If you peer in during operating hours, you’ll see what looks like a luxury urgent care center; an attractive shop, with blue tiled walls, a wood counter and a cash register. But it’s not allowed to showcase its products to the public.

There is space in the back where you’ll find the medical cannabis oils and extracts it sells (New York outlaws the sale of the smokable flower and edibles). But without proof you’re a state certified patient, you won’t get near it.

And if you need a little extra dose of intimidation, there are cameras and security systems covering every inch of the space and outside — signed off on by the New York State Department of Health (DOH).

How the legal cannabis industry has taken root, so to speak, in Brooklyn has been a story in which the product is still very much taboo. And few people are following the prohibition more strictly than landlords.

“A certain portion of landlords say, ‘Thanks, but no thanks,’” said Thomas Winter, the vice president for Northeast operations at Citiva. “It happens.”

One landlord hung up on Citiva officials the moment they mentioned the intended use of the space, Winter said.

Citiva is one of just three medical cannabis shops that have been allowed to operate in the borough. Columbia Care opened in Downtown Brooklyn at 44 Court Street earlier this year. In July, Williamsburg welcomed Remedy, a brand affiliated with registered operator Valley Agriceuticals. Remedy signed a lease for 3,800 square feet at the base of Pod Hotel Williamsburg at 178 North 4th Street.

Donny Moskovic of Katz & Associates, who represented Valley Agriceuticals in Remedy’s Williamsburg lease, told CO in July that “these deals have been the most complex but most satisfying transactions I have completed in my 25-year tenure.” (The landlord for the property where Remedy will be located, CB Developers, did not respond to an inquiry for this story.)

“Some of these owners are old-school and probably think that marijuana is still a gateway drug,” said Hector Rodriguez of Savitt Partners, who, with Michael Dubin, helped Columbia Care find its Park Slope location earlier this year. “We had to find an open owner, more of a younger generation that understands what’s going on and understands that this is going to go recreational eventually and will be everywhere.”

In Citiva’s process of finding its Brooklyn location, another potential landlord asked if he was going to have to be paid in cash because he thought Citiva would only ever deal in cash, despite the reputable, multistate operator having established bank accounts throughout the state.

There’s some sound reasoning for why these landlords are hesitant to sign up a dispensary.

New York’s medical cannabis program is one of the strictest in the country, with mandates that dispensaries are not to be located on the same street or “within 1,000 feet of a building occupied exclusively as a school, church, synagogue or other place of worship,” according to a DOH outline. There also are tough rules about advertising themselves and security, and a shop is not allowed to “make substantial alterations to the structure or architectural design of a … dispensing facility without prior written approval of [DOH].”

The state allows for 10 registered cannabis operators and each are allowed four dispensing locations and one manufacturing facility. Currently, 36 dispensaries are operating in the state, according to the last update on the DOH’s website.

Winter said due diligence is key for shops like Citiva. They engage with community boards or local organizations, making presentations on the business. Citiva also met and established a relationship with local police in Brooklyn, who they found to be quite familiar with the cannabis sector, Winter said.

Brooklyn Community Board 2 (CB2) District Manager Rob Perris said that when Columbia Care was trying to open its Park Slope shop — in Community Board 6 — it offered CB2 an informative presentation on the business.

Making these gestures of good faith are important.

“We want to be a part of the fabric [of the community],” Winter said. “When we create our stores, we want to fit with the neighborhood. Not have some same flashy neon signs.”

With all the traditional processes of opening a retail operation in New York, medical cannabis shops also have to deal with strict inspection from the DOH.

As it relates to the shop itself, “They’re looking at your entrances, your exits, your cameras and security,” Winter said about DOH oversight. “The DOH is really involved in the beginning, the middle and the end — the whole process.”

Citiva offers a delivery service via an app, which is also heavily regulated by DOH. The rules dictate who can drive the delivery vehicles and how the storage compartments are kept, and cameras must cover activity inside and outside the vehicle, among other controls.

It could cost tens of millions of dollars to go through the years-long application process to become a registered medical cannabis operator in New York. With that, they have to be renewed every two years, which costs upwards of $200,000, Winter said.

Moreover, the state can rule whether or not employees are hirable, and each shop is required to have a full-time pharmacist on site in order to conduct sales.

“If you’re selling cannabis to a patient, it must be done by a pharmacist,” Winter said. “If your pharmacist is sick and you don’t have one come in, the store is not making one sale.”

Citiva employs two full-time pharmacists and they also have a list of seven or eight per diem pharmacists who can be brought in should the other two be unavailable.

Security procedures are also something DOH monitors zealously, from the number of doors you have, to the types of locks on them, to the arc and angles of the cameras, to the types of cameras being used, whether or not they are “fish-eye” cameras.

“If you don’t have a camera right behind your cash register or if you don’t have one overlooking your inventory, they say that’s unacceptable,” Winter said. That’s because the DOH also closely monitors any losses from the business. (DOH was unable to comment on this story before publication.)

A shop has 24 hours to report a loss of any cash or stock after discovery; after filing a report, DOH will show up and ask to see security footage and will have the operator identify where it thinks the loss took place. That could mean “pulling film from 75 days” prior, Winter said, and walking DOH through what might’ve happened and how the shop will prevent it from occurring again.

“It’s kind of like going to the dentist,” Winter said. “It’s one of the most uncomfortable things you get to do in your lifetime. But, we pride ourselves on running a very tight ship.”

Another way the government monitors these retailers is through seed-to-sale tracking. When a company like Citiva grows a plant, it attaches a barcode to that stem and that stays with that stem until it’s produced into a product—whether that’s an oil cartridge or capsule, like what’s sold at the Brooklyn location, or an edible or pre-rolled joint, for example.

“The liquid in the cartridge can be traced back to a single plant,” Winter said. “Everything has to be accounted for when you’re producing these things.”

That kind of government oversight is not something every landlord wants in a tenant. Finding a suitable property with an accepting landlord can take well over a year, or several, said leasing brokers who spoke to CO. There are plenty of complications, a key one for landlords being that most mortgage lenders won’t allow for a location to be used for medical cannabis sales because it’s still outlawed federally.

Brooklyn might prove more challenging than Manhattan when it comes to real estate questions.

“Many [Brooklyn owners] don’t have the funds to build out a space or turn it into a vanilla box, so that’s a big turn off for some of these tenants,” Savitt’s Rodriguez said.

Columbia Care opened its location at Joseph P. Day Realty Corp.’s 44 Court Street in Brooklyn in January; the firm had previously established a Manhattan location in 2016. Like Citiva, the shop looks like a sleek luxury spa with the added feel of a pharmacy.

The company signed a 10-year lease for 7,000 square feet and will occupy 4,500 square feet on the ground floor and another 2,500 square feet within a below-grade space. The asking rents were $150 per square foot, which was typical of the market at the time of the lease, Rodriguez said, and not priced up just because it’s a cannabis tenant.

The process took about a year and a half, Rodriguez told CO. That’s in contrast to the typical leasing process, he said. “For a regular tenant … to find a space, it takes you a couple months, and by the time you negotiate everything, you’re probably looking at four months. Six months is tops, and you’re basically done.”

Rodriguez said there were various locations Columbia Care was interested in but after a few rounds of negotiations, some landlords punted. “They would just turn around and say, ‘Hey, look, this is not going to work,’” he said. “That put us back at square one and we had to get back out and start looking again.”

In the case of Columbia Care’s Court Street location, “The facilities look like a medical facility, and [Joseph P. Day] loved them for that,” Rodriguez said. “They kept to their word and said, ‘Look, whatever happens, we’re not going to have anything on the windows, advertising it; it’s strictly medical and you need a card to get in.’”

Growth in the sector is currently hogtied in the state, even as the market explodes for medical cannabis. The number of patients continues to rise, and with it, the number of qualified practitioners. As of Sept. 10, there are over 106,000 certified patients in the state and just under 2,500 registered practitioners, according to the DOH’s website.

The 2018 Farm Bill declassified CBD and hemp from the controlled substances list, which led to many unlicensed “mom-and-pop” stores opening around the city, selling CBD and hemp food and beverage products and other infused items.

But as they see the market heating up, many landlords are becoming more ravenous for cannabis retailers at their properties, Rodriguez said.

He said the waves of interest have led to many owners’ representatives hastily pitching him locations at properties all over the city, many of which won’t comply with existing law.

“I am getting a lot of calls from brokers, saying ‘look at this location,’ and ‘bring them over here,’ but it’s done, they can’t do anything else right now,” Rodriguez said, referring to the current licensing caps.

In July, Cuomo signed legislation decriminalizing marijuana in the state, a key step on the way to full legalization, although those pushes in the state legislature have so far fallen short. The signs the state is loosening the reins have many owners wanting a piece of the pie.

“I would say out of 20 owners that we saw [in Brooklyn], maybe 12 or 13 would take the [cannabis] use in a heartbeat,” Rodriguez said. “The funny thing is, the first time you speak with these owners, one of the first questions they ask is, ‘How do we invest?’”

Rodriguez said while he’s not in a position to sell an investment, he said he’s told landlords, “If you put them in your building, you can ask them yourself.”