Inside the Bronx’s Big Investment Boom 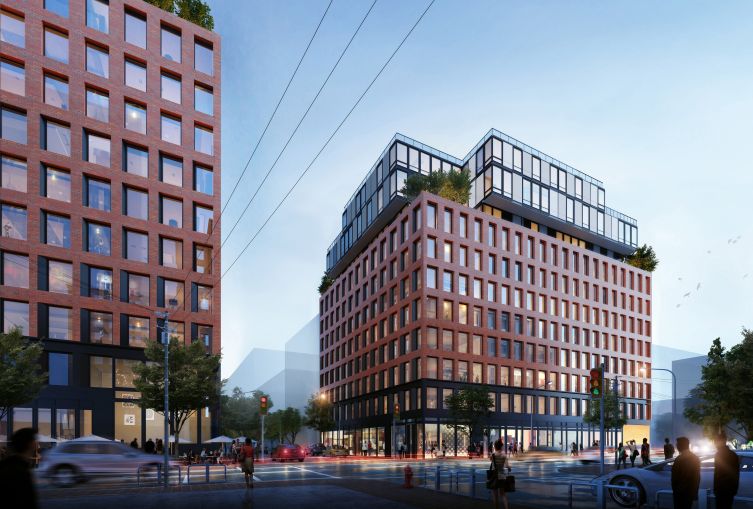 A rendering of a proposed apartment at 414 Gerard Avenue in Mott Haven, just one of many planned residential projects in the South Bronx. Image: Woods Bagot

The Bronx is fast becoming New York City’s latest real estate frontier, with its large swaths of undeveloped industrial and residential land not far from subway stations. Developers are paying record-breaking prices just to be able to put down stakes in the northernmost borough, whether they plan to build warehouses or apartments.

On the industrial side, the investment sales market in the Bronx is hotter than it’s ever been, thanks to e-commerce companies’ constant search for last-mile distribution space in New York City. A pair of warehouses at 1300 Viele Avenue and 1301 Ryawa Avenue in Hunts Point sold for $70 million, or $603 a square foot, earlier this summer. MRP Realty and AEW Capital Management purchased the two-building complex for $25.6 million in late 2017 and then flipped it for nearly three times the price a year and a half later.

How’d they pull that off? The two firms spent $6 million renovating the buildings and leased the entire 116,000-square-foot property to Amazon for a distribution center in January.

Similarly, Himmel + Meringoff and Square Mile Capital paid $89 million — or $291 per square foot — for a 305,000-square-foot warehouse at 1601 Bronxdale Avenue in the Van Nest section of the East Bronx.

“The Bronx just didn’t have the same level of investment from large investment groups like ourselves,” said Leslie Himmel, who co-founded Himmel + Meringoff 34 years ago. “We’re helping to revitalize a neighborhood.”

The firm invested in the property because of its potential as a last-mile distribution center; it’s near I-95 and the Bronx River Parkway, as well as a planned Metro-North train station that the MTA is building as part of a new four-stop extension into the eastern Bronx. The city is considering a rezoning of the area around the new Metro-North station, which would provide a big boost to the property.

The two-story building on Bronxdale Avenue is home to not only a large industrial tenant — car parts distributor Parts Authority — but also office tenants, like ConEd and a property management company, as well as a New York Sports Club gym. Himmel said that, while she liked the current tenants, the site may be redeveloped in the future because it has 100,000 square feet of unused air rights.

And while the new rent laws have put a damper on the multifamily sales market, development sites in the South Bronx have been selling like hot cakes. If all goes according to plan, the South Bronx will gain several thousand apartments over the next five to 10 years.

In February, Lightstone Group paid $59 million for a pair of former industrial parcels at 355 and 399 Exterior Street on the Mott Haven waterfront. Lightstone President Mitchell Hochberg told Commercial Observer that it planned to build 2,000 units of housing on the sites, 300 of which will be affordable, along with retail and parking. The company also paid $30.1 million for a 99-year ground lease nearby at 475 Exterior Street, which could give rise to an even larger residential project. Hochberg has pointed out that the firm has a track record building residential in former manufacturing zones, such as its 430-unit development at 365 Bond Street in Gowanus, Brooklyn.

Next door, Brookfield Properties is working on a massive, 1.3-million-square foot residential project at 2401 Third Avenue and 101 Lincoln Avenue. The two large waterfront parcels are expected to give way to three towers, 1,300 rental apartments, 20,500 square feet of retail and a 178-car garage. The real estate investment trust acquired the two properties last year from Somerset Partners and Chetrit Group for $165 million.

Further north and west, in Mott Haven, Domain Companies picked up a pair of lots at 414 and 445 Gerard Avenue for $38.5 million in April. The zoning allows for a 428,906-square-foot mixed-use development with several hundred apartments, at least a quarter of which will rent for below-market rates. Treetop Development, previous owner of the sites near the 145th Street Bridge, had planned to build a pair of 12-story residential towers with 414 apartments.

Adam Mermelstein, a principal at Treetop, said his company was planning to move forward with the project until Domain made it an offer it couldn’t refuse.

“Truthfully, we loved the site, we loved the location,” Mermelstein told CO. “At the same time, we are opportunistic investors, and when Domain came to us with an offer which we thought presented enough value to us to not proceed with our plans of developing the property, we took it.”

Mermelstein noted that the recent rent law changes — which limit landlords’ ability to recoup the cost of renovations — had him worried about the future of rent-stabilized housing in the Bronx.

“We’re extremely concerned about our existing holdings,” he said. “I’m concerned about the long-term viability of multifamily real estate in New York City. It used to be that we were incentivized to upgrade and improve the building, and now we’re disincentivized to invest money into our assets. Buildings will deteriorate over time because landlords are not being paid for their investments.”

The city is also developing three major projects in the South Bronx. L+M Development Partners and Type A Projects are building a 1,045-unit mixed-use complex known as Bronx Point on a city-owned parcel between the Major Deegan Expressway, the Harlem River, the 145th Street Bridge and Mill Pond Park. The development, which got approval last week from the City Planning Commission, will include a 10-screen movie theater, the country’s first brick-and-mortar hip hop museum, community space for the Billion Oyster Project and the BronxWorks community service program, and a public waterfront esplanade. Half of the apartments — 540 units — will be permanently affordable.

And, in Hunts Point, the New York City Economic Development Corporation tapped Gilbane Development Company, Hudson Companies and the Mutual Housing Association of New York to redevelop the former Spofford Juvenile Detention Center. The former jail has been demolished to make way for a five-acre, $300 million project, known as The Peninsula, which will include 740 affordable apartments, 50,000 square feet of light industrial space, 53,500 square feet of community facility and artist workspace, and 52,000 square feet of public open space. Construction began this year and is expected to finish in 2024.

Finally, there’s La Central, a 992-unit residential project under construction in Melrose. Financed through $335 million in public and private funding, the 100 percent affordable complex will rent to a range of low- and moderate-income households. It will also include a new YMCA, a TV studio for local public TV station BronxNet, a rooftop garden, 80,000 square feet of community facility space and 45,000 square feet of retail. BRP Companies, Hudson Companies, Comunilife and YMCA of Greater New York broke ground on the first phase of the development last year.

Among the deluge of units, Mott Haven, in particular, is expected to be flooded with market-rate units expected to rent for the high $40s or low $50s per square foot, which works out to roughly $2,000 for a 500-square-foot studio. The big question is whether Bronxites and gentrifiers will be willing to pay those prices to live in a former industrial area with excellent subway access but few retail options. Although the southern edge of Mott Haven has a smattering of new restaurants and coffee shops, the neighborhood will need more bars, restaurants and fitness options to support thousands of new residents, along with run-of-the-mill necessities like grocery stores, laundromats, liquor stores and bodegas.

“The transportation is there, but what needs to change is attractions and retail,” said Jason Gold, an investment sales broker at Ariel Property Advisors who specializes in the Bronx. “You need service providers there, you need restaurants, you need nightlife. You have some, but you don’t have enough to fill 2,000 units. The old saying is, ‘You build it, and they will come.’ I think once this new construction is being built, there are going to be a lot of opportunities for shopping to open up on Bruckner Boulevard and the side streets. That atmosphere will come to the Bronx, it’s just a matter of time.”

He added: “Pricing metrics have skyrocketed in the past ten years, but have there been new places to eat? I can count on one hand places that have opened in the area — the pizza places, the coffee shops. But you need triple, quadruple that amount in order to build a city.”

Other Bronx-watchers put a more positive spin on the development and retail situation in Mott Haven.

“There’s always going to be jobs here in the South Bronx, at hospitals and schools,” said Marcus & Millichap investment sales broker Michael Fusco. “The beauty of it is there’s not a lot there. There’s an opportunity for a lot of these developers.”

“There’s some pent-up demand within the South Bronx,” Jones told CO. “There are people living in the South Bronx because that’s where they want to be. But there wasn’t really much new construction.”

For developers who are buying now, “their land basis a couple of years from now is going to be incredible,” explained Jason Meister, her Ackman-Ziff colleague and fellow investment sales broker. “Where else can you buy land for $125 a square foot on the waterfront near the subway?”