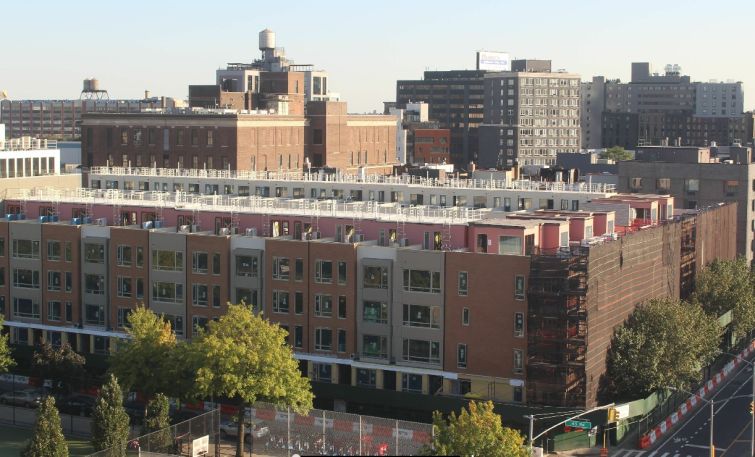 The loan will refinance previous construction debt provided by Santander Bank in 2016 and help fund the completion of the project. Santander had a “participant lender” working with them in the deal, GDC co-chairman Adam Ginsburg said, although he wouldn’t reveal the name of the lender.

The transaction was arranged by the newly launched AKS Capital Partners, founded by former JLL Capital Markets heads Aaron Appel, Keith Kurland and Jonathan and Adam Schwartz. The advisors left the brokerage in August, just weeks after the it acquired rival HFF, with plans to launch their own firm, as Commercial Observer reported. AKS declined to comment on this transaction. JLL’s Mark Fisher also worked on the deal with the AKS founders prior to their departure from JLL.

The four-story development — at 11-15 46th Avenue — is the first of its kind in Queens, built expressly for townhouse-style rentals. It will comprise 68 three-bedroom townhouses and eight two-bedrooms, Ginsberg said. Each residence will average around 2,000 square feet, he said.

He added, “It’s a series of two-family homes for rent, and we’re trying to fill a hole in the market for young families who oftentimes leave the city for a lack of appropriate options.”

GDC had first filed plans to develop in 2014, but ran into a litany of unforeseen issues with constructing this particular kind of development in LIC, Ginsberg said.

“There were some logistical difficulties, like it’s harder for [contractors] to get from room to room, because each two-family house is its own fee simple,” Ginsberg said. “Each one is its own house, with its own set of permits, and every inspection is times 38 homes; every submittal is times 38. It’s fair to say we underestimated the additional burden that came with that.”

He added: “We were also in development at the same time 421a was expiring and there was no certainty as to what it would look like on the other side. Those factors, along with consideration of the huge amount of supply that was in the pipeline at the time, the larger properties had the ability to offer amenities we wouldn’t be able to match, so we were driven to find a niche that wouldn’t put us in competition with that product. It’s always been our goal, through design and concept, to deliver something different in the markets we operate in.”

The property — designed by Newman Design Architects — will feature a gated, internal private courtyard to which all residents will have access. Ginsburg said the lower, garden homes will have basements, or dens, with half baths, as well as private backyards, with granite paving stones that lead to the gated common area; and the top floor homes will each have a private, landscaped balcony and a separate room.

“There’s a high attention to detail [with these homes to] suit families, like there’s a lot of storage area, a ton of closet space, and the upstairs units have a bonus room that can be a play area or a nursery or a little gym,” Ginsberg said. He confirmed that the units will rent for around $7,000 per month.

Listing them as for-sale housing rather than rentals is “not our strategy or plan,” Ginsburg added. “But, it’s not lost on us that each is an individual home, and we’re cognizant that that creates additional optionality.”

Ginsberg said his firm is intent on rentals given its history as a “family-owned, long-term real estate investor.”

He said that his firm has an advantage with this development in that with “the way we’re built, the delivery period will be four buildings at a time coming online, with the first group launching in October,” Ginsberg said. “[We’re] aiming to be [fully] complete in the first quarter of 2020. Each house is essentially a triplex over a triplex. The upstairs apartments will have a penthouse that has a wet bar with a mini fridge and those let out into private, landscaped roof gardens.”

GDC bought two adjoining industrial sites in 2014 that were subsequently demolished to make room for this development. It bought a 33,660-square-foot former one-story warehouse at 11-24 45th Road for $37 million and a 13,400-square-foot warehouse at 45-35 11th Street for $7 million, as CO previously reported. Santander funded the acquisition with a $22 million loan, city records show.

GDC president William Ingraham told CO in October 2014: “We like that it’s in a low-density area, which distinguishes it from other parts of Long Island City, and the transportation into Midtown is terrific.”

The site at 45-35 11th Street was zoned for both manufacturing and residential uses, and it allowed for the construction of a development that around three times larger than the factory that was previously housed there, according to city records.