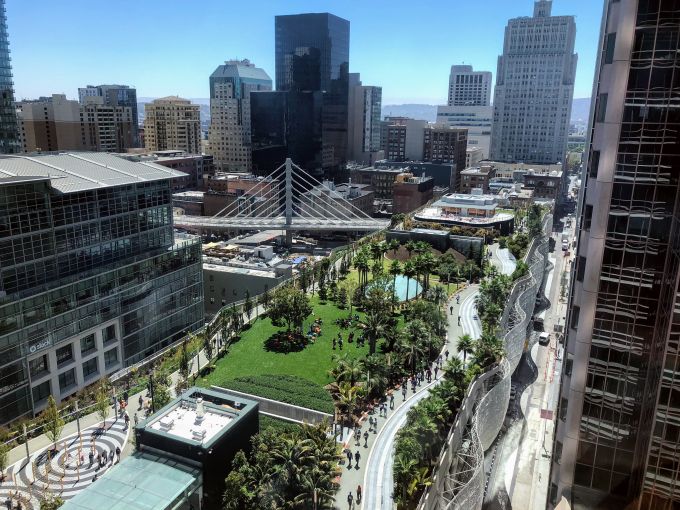 MetLife Investment Management has picked up a $550 million CMBS loan from Bank of America against the shiny new San Francisco office tower that will be Facebook‘s home in the city, according to Kroll Bond Rating Agency, which analyzed the transaction.

The new debt knocks out Wells Fargo‘s $294.5 million construction loan on the project, the Park Tower at Transbay, on which construction wrapped last year. Facebook, which is headquartered 25 miles southeast in Menlo Park, Calif., will be the 43-story building’s sole office tenant when it finishes moving in next year. The tech company, which also owns Instagram and WhatsApp in addition to the world’s largest social-media site, has a deal to triple-net lease the 756,000-square-foot tower until 2034.

MetLife will owe CMBS investors 3.45 percent interest for ten years on the debt, which has a full-term interest-only structure. The loan doesn’t mature until 2034, when Facebook’s triple-net lease is up, but interest will rise to 5.95 percent if MetLife doesn’t pay investors back by 2029. An appraiser, BBG, has tagged the tower with a stabilized valuation of $1.12 billion, suggesting a loan-to-value ratio of 49.1 percent. A fifth of the debt has already been earmarked for the upcoming BANK 2019-BNK20 CMBS deal, with the remainder reserved for future issuances.

The building, at 250 Howard Street, is the latest office-sector addition to San Francisco’s booming South of Market district, which has greeted a legion of the world’s biggest tech companies in recent years. Salesforce, a cloud-computing company, is headquartered two blocks away at the eponymous 61-story tower owned by Boston Properties and Hines, which became San Francisco’s tallest building when it opened last year. Google, for its part, leases 386,000 square feet of office space in Hills Plaza at 345 Spear Street, the largest of several San Francisco offices for the Mountain View, Calif.-based search giant. Smaller tech firms including Slack, which provides office communication services, and Fitbit, which makes smartwatches, are also based within a few blocks’ walk.

The Park Tower stands directly across from the brand new Transbay Transit Center, a quarter-mile-long bus terminal that opened this summer to replace previous depot. The new terminal includes a 5.4-acre rooftop park, and could eventually be augmented with a rail station that would serve Caltrain — which provides service to Silicon Valley — as well as the inchoate high-speed train to Los Angeles. (Gov. Gavin Newsom indefinitely suspended most work on the project earlier this year over budget problems.)

MetLife, which bought its 95 percent ownership stake from developers Golub Real Estate and the John Buck Company for $345 million in 2015, expects to earn about $84.5 million in rent from Facebook annually, as per KBRA. Each of the building’s floors has floor-to-ceiling windows. There’s also an underground parking garage, a three-story lobby, and 14 outdoor decks for Facebook employees.

Representatives for Bank of America did not immediately respond to inquiries. A MetLife spokesman declined to comment.