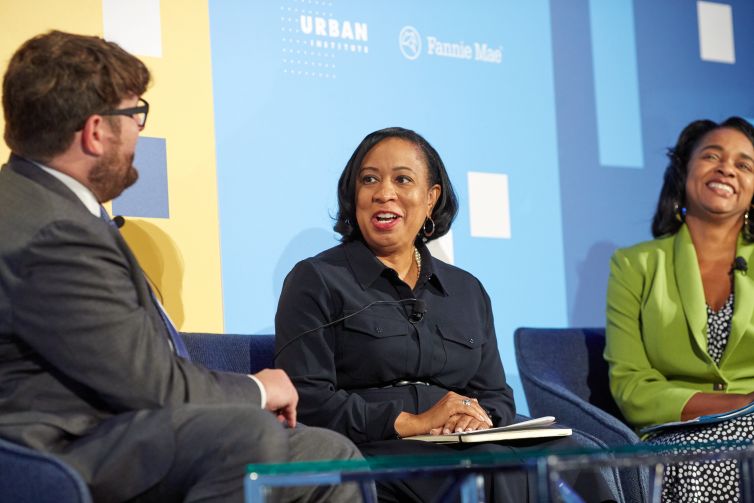 Cities with abundant housing supply are all alike, but each city with an affordable-housing crunch is unaffordable in its own way.

So it seemed at Fannie Mae and the Urban Institute’s conference on urban housing markets in Washington, D.C., this week, where groups of officials and community leaders from the nation’s capital and from Charlotte, N.C., discussed those cities’ particular housing challenges.

In Charlotte, a city of nearly 900,000 just across the state line from South Carolina, the problem begins with the breakneck pace of growth: In recent years, about 100 newcomers have been moving in every day, according to Pamela Wideman, Charlotte’s director of housing and neighborhood services. And, putting an even greater strain on the community, around 13 percent of them arrive with a need for a housing that’s affordable to those with low incomes.

A reversal of earlier suburbanization trends is one driving factor, she noted. “There’s a resurgence of folks who want to live in the city,” Wideman said. “There was white flight, but people are now coming back to those neighborhoods. People want to be able to live close to where they work and where there’s transportation.”

The housing pressure created by that trend led Charlotte to team up with the Local Initiatives Support Corporation, a nonprofit spawned by the Ford Foundation. Ralphine Caldwell, LISC’s executive director in Charlotte, explained that her organization is overseeing a $75 million fund to provide seed money for more residential development in the city, an effort backed by taxpayers and local charities and companies.

“Developers have been able to submit deals … and we’ve had 14 actual developments that were submitted,” Caldwell said. “We’re excited about that.”

Affordable housing became a top priority for the city in the wake of the 2016 shooting of Keith Scott, who was killed by a police officer. That incident led to broader discussions about how to improve the lot of the city’s low-income residents, Wideman said.

“Charlotte was in the bottom 50 out of the 50 largest [U.S.] cities in economic mobility,” Wideman said. “If you were born in Charlotte in poverty, you were likely to die in poverty in Charlotte. That set the stage for the city increasing its allocation [in the LISC fund] to $50 million, and that really set the stage for partners to come forward and say, ‘We’ll match your $50 million.’ What I like to say is, we need that to happen a couple more times.”

Compared with Charlotte, Washington, D.C., is the smaller city — but that just means that its housing challenges spill over to the neighboring states of Maryland and Virginia. That’s led Christian Dorsey, the chairman of the Arlington, Va. Board of Supervisors, on a crusade to free up more space for development in the prosperous D.C. suburb, just across the Potomac River.

“The third rail in many localities has been land use,” Dorsey said. “My vision is to see us marry the commitment to putting our budgetary dollars to where our values are [with an effort to] unlock closed areas to an amount of development.”

The next step, of course, is to make sure funding for development and preservation is available. But the federal government’s waxing and waning appetite for a role in supporting affordable housing has frustrated local officials, Dorsey said.

“While I completely agree that the federal government has a role in supporting housing, I’m also not banking on it in order to make our strategy work,” he explained. “If we’re waiting for federal investment, we’re going to fall behind. We have to act as if federal resources won’t be there.”

Michelle Winters, executive director of Alliance for Housing Solutions, an Arlington nonprofit, said that she’s not holding her breath, either.

“The federal government has backed off tremendously over decades,” Winters said. “Local governments have been stepping up.”

Although she’s been encouraged by the fact that Democratic presidential candidates discussed federal housing policy options during the summer’s primary debates, she warned that even an engaged executive branch could find it difficult to move the needle on nationwide affordable-housing issues.

“Some of them this time around have [been] dabbling in how the federal government can impact what goes on, but it’s a very complex issue,” Winters said. “In these cases of local land use, the federal government would have a hard time telling local governments what to do. But we have seen a couple presidential candidates start to address that concept.”