By Land, Sea or Bike Path: How the Bronx Is Reinventing Its Transit Map 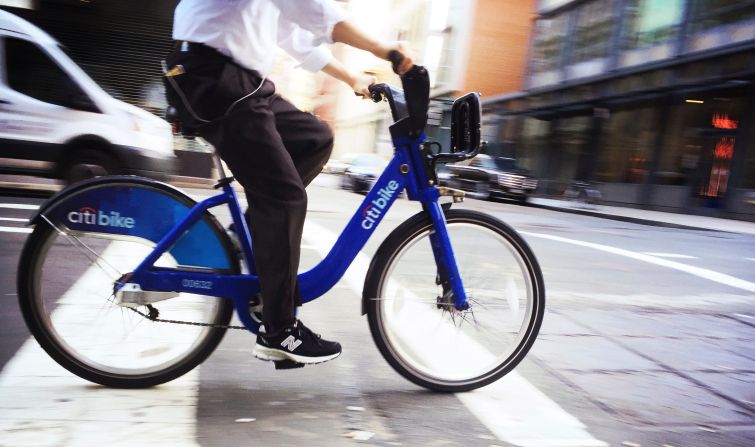 Noah Kaminsky knew all along that he wanted to find a place of his own in the Bronx, but it was a speech from Borough President Rubén Díaz Jr. at a cycling event, of all places, that sealed the deal.

“I grew up in the Bronx, and it was affordable, so I could purchase a [co-op] apartment,” said Kaminsky, a 28-year-old high school science teacher who works on the Upper East Side. But when Díaz “said, in front of everybody, that that he’s for development but he’s also supportive of not losing the culture and the vibe that the Bronx has maintained, his words really resonated with me — and also that he hopped on a bike and did the Tour de Bronx with us.”

Jumping on a bike was a nice touch for Kaminsky. Maybe even the selling point for someone eyeing the borough and wondering about its transportation options.

Thousands of new apartments are set to come online in the South Bronx in particular, but some districts in that area, including Hunts Point, Castle Hill and Throgs Neck, are more than a brisk stroll from the subway.

As a result, improved transportation is a make-or-break issue for developers, market experts warn.

“Essentially, we’ve seen in the later part of this cycle that the Bronx has become one of the hotter markets [in New York City] because investors have been chasing higher yields, which they’re now finding in the Bronx,” said Andre Sigourney, a CBRE investment sales executive. “Connectivity to Manhattan has been crucial to this development.”

But policymakers have seized the moment to bring a slew of changes to the Bronx’s transit network. Most impactful is likely to be the Metropolitan Transportation Authority’s back-to-the-drawing-board initiative to revamp the borough’s bus routes. About 16 percent of the Bronx’s 1.5 million residents — just under 240,000 — commute primarily by bus every day, according to the agency. But they have to reckon with agonizingly slow average speeds of under 7 miles per hour, which has, as per MTA data, contributed to a rapid decline in ridership over the last four years.

“The Bronx bus network has not substantially changed in decades and needs to evolve to meet the changing needs of our bus customers,” the agency wrote in a recent report.

Along those lines, New York City Transit set out to redesign the borough’s bus service beginning late last summer: This August it released a draft plan that represents its first shot at suggesting how the new map could look. So far, the efforts have been focused on overhauling the way buses connect to subway and commuter rail lines and reviewing how closely bus stops are spaced. Removing underused stops will help busses move at speeds closer to the regular flow of traffic, even if it means some riders have to walk a few extra blocks, the MTA said in the report.

There will also be wholesale changes to some routes, with the aim of creating more point-to-point service along key corridors. For instance, instead of the current convoluted route that sees the Bx36 bus ping-pong between segments along East 174th and East 180th Street in the East Tremont neighborhood, the new route will zip straight down East Tremont Avenue, cutting out time-consuming turns.

Other big changes include streamlined routing for the Bx11 bus in High Bridge, realigning several routes that serve the 50,000 Bronx residents who live in Co-op City, and amending service that connects the Bronx to Manhattan’s 125th Street. In all, 15 of the borough’s 46 routes would move, in part, to new streets, and 41 would see stops eliminated in an effort to speed up travel times.

Improvements in east-to-west connectivity are a particular priority for Díaz, the borough president.

“I’m from the South Bronx, and when I was growing up, you just didn’t want to come [west] to restaurants on Jerome Avenue,” Díaz said, noting that the trek is still a hassle. “People from Riverdale — it’s hard for them to get to City Island or East Tremont. And it concerns me that for someone in High Bridge, it’s easier to go to a restaurant in Washington Heights [in Manhattan] than it is to go to one in the east Bronx.”

“Andy Byford has been tremendously open-minded and accessible,” Díaz said. “And [Oddo], my colleague in Staten Island, told me that when something didn’t work out, Andy was open to changing it in real time. “

A finalized plan is due later this month. Upgrades to the subway, a considerably weightier transit issue, will be slower. The most important improvements to the Bronx’s subway lines, the addition of communications-based train control technology that promises to make trains speedier and more reliable, might not be achieved for another decade, under the MTA’s latest capital plan.

In the meantime, a growing bunch of Bronx commuters have glommed onto a nifty alternative — the NYC Ferry route, launched last year, which connects Soundview in the South Bronx to two landings in Manhattan: one where East 91st Street hits the East River near the north end of Carl Schulz Park, and another on Pier 11, at the east end of Wall Street. And work is underway on a second Bronx landing, which will eventually extend service beyond Soundview to Throgs Neck in the northeast.

The service has already proven its ability to shape the borough’s real estate scene. According to CBRE’s Sigourney, the biggest multifamily sale of the first half of 2019 was Related’s sale of an apartment building, 2001 Story Avenue in Castle Hill, to developer Abraham Fruchthandler’s FBE Limited. It was a deal motivated in part by the presence of the new ferry service.

“2001 Story Avenue is due north of Clason Point Park, where the new ferry landing is,” Sigourney said. “It’s a quick nine-minute bus ride due south to the ferry. I think that’s probably an example of an investor seeing that the transportation option definitely provided stability and upside for that asset.”

But NYC Ferry’s promise to make Bronx commutes significantly more accessible is up against some serious obstacles. For one thing, many riders have proven to be literal fair-weather fans of the service. Last year, as autumn turned to winter, citywide ridership fell off drastically, according to data provided by the ferry service. In the first week of October 2018, nearly 140,000 riders cruised on the system citywide. But by the first week in December, the boats’ popularity had fallen with the thermometer: Ridership plummeted by more than half.

Middling ridership has afflicted the Soundview line in particular. During the height of summer last year, between July and the end of September, more than 2,500 riders used the line on average days. That’s more than swipe their MetroCards at some lesser-used Bronx subway stations: The East 143 St.-St. Mary’s St. stop on the 6 train sees only about 825 riders per day. But ferry ridership didn’t hold a candle to the number of passengers who use the borough’s busiest stations, such as 3 Av-149 St. on the 2 and 5 trains, where the number of passengers was close to 19,000 on the average day last year.

New York City’s Economic Development Corporation, the city agency responsible for overseeing the privately operated service, pointed out that ridership has already surpassed initial expectations. The route was expected to carry 410,000 riders per year, but in its first 12 months it beat that number by two thirds, notching more than 680,000 rides.

“NYC Ferry has transformed commutes for hundreds of thousands of Bronxites over the past year,” a spokeswoman for the EDC said. “The Soundview route’s ridership has surpassed our expectations and has provided people living and working in this community with a reliable commuting option.”

But critics also have concerns that that the transit mode isn’t particularly cost effective. This spring, the nonpartisan Citizens Budget Commission predicted that the extension to Throgs Neck would serve 80,000 riders per year — but, given the $2.75-per-ride cost to passengers, public money would have to subsidize the service to the tune of $16 per ride. (The public subsidy on Staten Island Ferry rides is closer to just $5 per ride.)

Cost concerns aside, the newfangled transit mode is already making development more viable in the underserved Bronx neighborhoods where it helps commuters get to Manhattan. Jonathan Squires, an investment sales executive at Cushman & Wakefield, described those districts as “transit deserts” before the boats came to shore.

“I think [the ferry] totally transforms the way in which people can get to work and where they can get to work,” Squires said. “Soundview has always been very far from the train, and it still is.”

The service could be yet more transformative for the borough’s Throgs Neck section when service is extended there in 2021. Most of Hunts Point, at least, is within about a mile of a 6 train station. The remotest part of Throgs Neck, on the other hand, is well over twice that distance from the nearest New York City Transit train line.

“The train doesn’t make it to Throgs Neck,” Squires said. “Throgs Neck right now is an area much like a suburb, where most of the transportation is cars and buses. The ferry will be very convenient.”

Díaz is also enthusiastic about a project to expand the ways that New Yorkers can ride the rails from the Bronx to Manhattan. In January, state offices, including the MTA, Empire State Development and Gov. Andrew Cuomo, settled on a plan to build four new Metro-North stations along an underused track that connects Penn Station and New Rochelle. (Today, it’s only used by Amtrak trains that whiz by without stopping on their way between New York and Boston.) The new stops, in Co-op City, Morris Park, Parkchester and Hunts Point, will be a boon to the transit-starved portions of the borough that lie east of the Bruckner Expressway, the borough president predicted.

“When you look at the MTA trains and the history of our borough, the west side of the Bronx was the part that had the most density and the part that you saw the investment in MTA infrastructure,” Díaz said. “We made [the new service] a reality by convincing the governor and the state to make it part of their capital plan, so the four Metro-North stations are now fully funded.”

Díaz also avers that more Bronxites would be eager to pedal their own way to and around the borough — if only they had the bikes. Given that the Citi Bike program is six years old and that Queens and Brooklyn have already enjoyed docking stations for years, Díaz said it will be gratifying — if overdue — when the first bikes arrive in the Bronx in 2020.

“I’d been really upset at Citi Bike and the City Department of Transportation because the Bronx is always left out,” he said. “In the Bronx, we like to ride bikes as well.”

Lyft, which purchased the Citi Bike program’s parent company, Motivate, last summer, plans to boost the number of bicycles across New York City to 40,000 from under 15,000 today by 2023. The expansion into the Bronx will include new docking stations in Claremont, Concourse, Longwood, Melrose, Morris, Morrisania, Mott Haven, Mt. Eden and Port Highbridge.

In the meantime, commuters like Kaminsky who have their own bikes are already proving cycling’s viability in the borough. He bikes to his parents’ place in Riverdale, going north on quieter roads, and cycles back from work in less than 40 minutes, using the bike paths in Harlem and going over the Macombs Dam Bridge.

“You can see the potential for cycling to fit a lot of commuters’ lives who are going a couple of stops on the train between the Bronx and Harlem,” Kaminsky said. “I’d like to see it developed more, because I’d definitely use it.”