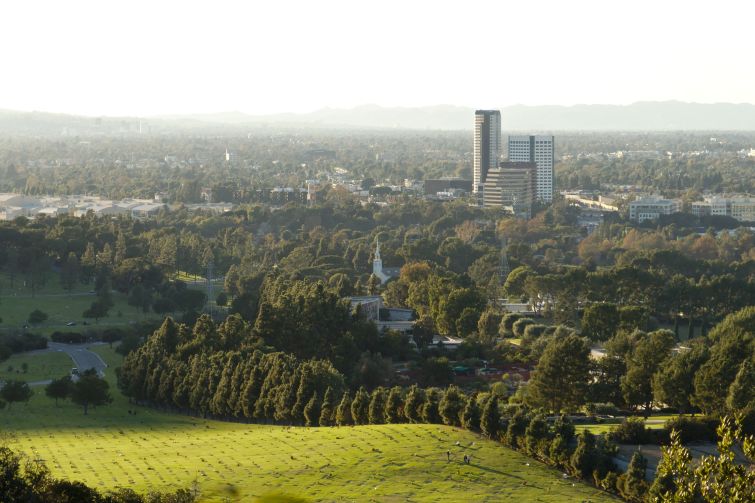 A park in Burbank, with the Blackstone tower in the background. Photo: Wikicommons

Wells Fargo has provided Blackstone Property Partners with a $195 million CMBS mortgage on an office building it owns in Burbank, Calif., according to Fitch Ratings, which analyzed the transaction.

The loan is secured by The Tower at Burbank, a 32-story building at West Alameda Avenue in the media-heavy Los Angeles County enclave, about 12 miles north of downtown Los Angeles. Blackstone and its minority partner in the building, Worthe Real Estate, will pay interest fixed at 3.1 percent on the 10-year debt, with no principal payments due until maturity in 2029.

Worthe initially bought the entire 480,000-square-foot tower in 2014, paying $109 million for a property that added to an already significant Worthe office portfolio in Burbank. Three years later, the tower was part of a deal in which Blackstone paid $1.36 billion for an 80 percent stake in it and five other nearby Worthe properties, valuing the six-building group at $1.7 billion.

The new Wells Fargo debt knocks out $143.1 million in prior financing and allows the ownership duo to recoup $34.5 million of equity in the asset. A Wells Fargo spokeswoman declined to comment, and a representative for Blackstone didn’t immediately respond to inquiries.

Disney, which is headquartered on a separate campus in Burbank about a mile away, will become the office building’s biggest tenant when it moves in in January 2020, leasing 116,000 square feet for its animation division. A WeWork coworking location takes up another 75,000 square feet, and the third-largest tenant, at 56,000 square feet, is Vubiquity, which helps media companies earn money for their content online.

The building’s first five floors are dedicated to parking, as is a garage that extends several levels below ground. Tenants also have access to a fitness center, a café and a lounge area.

Last year, the building earned income of $10.9 million after expenses on effective gross income of $16.5 million. A $14 million renovation completed this year has added to the building’s value, which Wells Fargo appraised at $314 million.

U.S. entertainment production is synonymous with Hollywood, but Burbank is an even greater crossroads for the industry’s most powerful companies. In addition to the Disney headquarters, the Blackstone tower is also a stone’s throw from the Warner Bros. studio lot, as well as major production sites for NBC, CBS and Dreamworks. Legendary Entertainment — which helped make blockbusters like “Mamma Mia! Here We Go Again” and “Pacific Rim” — DC Comics and Nickelodeon are all based in the city as well.