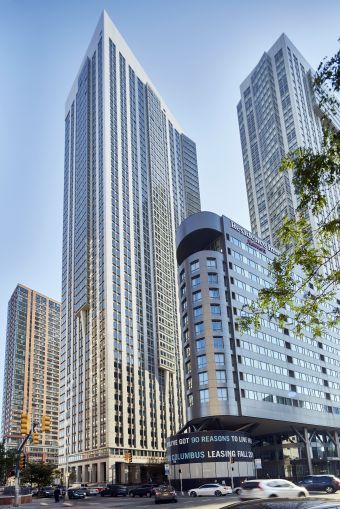 The 50-story property — at 90 Christopher Columbus Drive — was designed by architecture firm Gwathmey, Siegel, Kaufman and Associates and is the last phase of the Columbus Drive multi-phase development that has spanned 14 years. AIG’s loan takes out previous construction debt on the 539-unit asset, for which leasing began last September. The building is now 100 percent leased.

Ironstate and Panepinto began construction on the first phase of the development, 50 Columbus — a 400-unit rental building — in 2007. As part of its construction, the developers teamed up with the Port Authority of New York and New Jersey to rebuild the Grove Street PATH station and construct a 1,100-space parking garage for commuters and tenants. The second phase involved the development of 70 Columbus, a 545-unit luxury rental building, as well as a 152-room Marriott Residence Inn at 80 Columbus.

Residents at 90 Columbus will have access to the development’s full amenity package, which includes a 60,000-square-foot roof deck, BASE Gym — a 30,000-square-foot fitness facility, a dog park and a swimming pool. Living spaces range from studios to three-bedroom luxury residences and the project offers views of the Manhattan skyline and the Hudson River.

Hoboken, N.J.-based Ironstate, headed by co-founders David Barry and Michael Barry, is one of New Jersey’s biggest developers and the firm behind the redevelopment of the former Bethlehem Steel Company in Hoboken into a mixed-use community, as well as the city’s 26-story W Hotel and residences. The property features 225 hotel rooms and 40 condominiums, which were sold at the highest rate in the city’s history. In Manhattan, its properties include the 145-key Standard East Village hotel — formerly the Cooper Square Hotel.

Jersey City-based Panepinto was founded in 1977 and is headed by CEO and President Joseph Panepinto. The company and its affiliates have developed a portfolio of more than 6.3 million square feet of residential, commercial, and retail space. Its properties include 3 Journal Square, a 240-unit luxury residential tower in Jersey City’s Journal Square neighborhood; The Gotham, a 23-story luxury rental residence in Jersey City.

A spokesman for Ironstate did not immediately return a request for comment. Officials at Panepinto were not available for comment by press time. Iron Hound officials declined to comment.