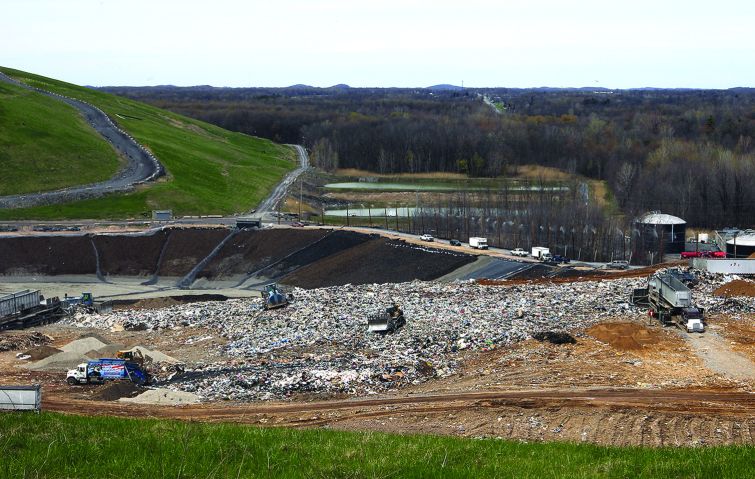 In 2016, after years of dealing with the smell, the town of Seneca Falls, N.Y., passed a law that would close down Seneca Meadows, the state’s largest landfill, when the facility’s permit runs out in 2025.

“The community has come to the realization that we need to be out from under the landfill,” Seneca Falls Town Board Member Doug Avery said.

The Seneca Meadows Landfill imports 9 percent of New York City’s trash, according to the city’s Department of Sanitation (DSNY). That garbage contributes to the 6,000 tons of trash a day that gets dumped near the town, which has around 9,000 residents. Parts of the landfill are within a mile of residential areas, according to Avery. “It’s hard to stomach,” he said.

The Finger Lakes region in upstate New York is moving towards closing its landfills, which creates a predicament for New York City as it deals with the rising costs and troubling environmental impacts of carting away trash produced by its 8.4 million residents.

Landfills in the Finger Lakes region, which sit about 270 miles north of the city, took in almost a quarter of the 5.7 million tons of trash that was exported from New York City in 2015, according to the New York State Department of Environmental Conservation (NYSDEC). That makes up about one-third of the trash in the Finger Lakes landfills and the residents have had enough.

Some residents of Seneca Falls and neighboring towns have filed a class action lawsuit against Seneca Meadows, Inc., in response to odors, environmental law firm Liddle & Dublin, PC (L&D) announced on its website. Since March of this year, over 100 odor complaints in the areas around the landfill have been reported to online portal ItStinks. The website was created by former Geneva City Councilor Jackie Augustine and software engineer Jeff Henderson as a way for residents to report odor complaints without going through landfill companies, the Finger Lakes Times reported.

Similarly, the parent company of the High Acres Landfill, Waste Management, was sued by locals for odor and noise complaints, as environmental news website Waste Dive reported. It was the first lawsuit against a landfill where New York City was listed as a defendant. High Acres landfill is the second-largest landfill in the region, behind Seneca Meadows. It’s one of several landfills that New York City carts its trash to via railway, according to the DSNY.

In response to the law that ordered its 2025 closure, Seneca Meadows has sued the town of Seneca Falls. The case has yet to be deliberated on because the class action suit is still being considered by a judge, according to Avery.

Spokespeople at Seneca Meadows, Inc., declined to comment. L&D did not respond to questions.

Geneva, another Finger Lakes city, also decided to pass a law that would ban future landfill permits after the Ontario Landfill’s permit expires in 2028. This law came after months of pervasive stenches, Geneva City Council Ward Ken Camera said. He also said that the Ontario Landfill takes in 3,000 tons of trash a day.

After the Fresh Kill Landfill on Staten Island closed in 2001, New York City has been exporting its trash to landfills or incinerators either upstate or out of the state, nonprofit media organization CityLimits reported.

Around 28 percent of the city’s refuse is sent to waste-to-energy centers and the rest is sent to landfills in central New York, Pennsylvania, Virginia and South Carolina, according to the DSNY. About 1.35 million metric tons each year end up in the Finger Lakes region alone, NYSDEC data shows.

The cost of exporting New York City’s trash has been increasing over the past decade: The city is expected to pay $420 million in 2021 to export its trash, a significant increase from the $316 million paid in 2015 and the $300 million in 2011, according to a report from the New York City Independent Budget Office (IBO). Prices are expected to keep climbing in the immediate future, the IBO reported.

The DSNY did not respond to inquiries about the impact of the Seneca Meadows closure.

If the city has to export its trash even farther distances, to out-of-state sites, “the net cost of this remote landfilling is likely to be higher than our current costs of using the landfills in the Finger Lakes region,” Benjamin Miller, a member of the sustainable infrastructure planning and development group ClosedLoops and the former director of policy planning for the DSNY, said. The exceptions are several of the landfills in Pennsylvania, which sit closer to the city than those in the Finger Lakes.

The transportation of trash out of the city releases millions of tons of greenhouse gasses every year, according to Transform Don’t Trash NYC. Greater distances, without a reduction in trash exported, will lead to more greenhouse gas emissions.

In 2015, New York City Mayor Bill de Blasio introduced the Zero Waste to Landfill by 2030 initiative, which aims to reduce the amount of trash sent to landfills from the city by 90 percent from 2005 levels. In theory, that would mean that the closing of these landfills should not impact the city. But many are skeptical of the city’s ability to attain that goal.

“The city has made negligible progress toward these ends,” Miller said. “Nor has the commercial sector made any progress in developing such facilities for the half of the city’s municipal solid waste that is collected from businesses.”

The DSNY disagrees: “In fiscal year 2018, DSNY collected 3.19 million tons [of trash], a decrease from the 3.27 million tons of refuse it collected in fiscal 2013. This has happened amid population growth in New York City,” a DSNY spokesperson said. “The most recent Waste Characterization Study shows that our efforts … are working.”

Perhaps surprisingly, there are some in the Finger Lakes region who oppose landfill elimination. Seneca Falls Town Supervisor Gregory Lazzaro believes that the host payments given to the town by Seneca Meadows (around $3 million annually) are necessary for maintaining the residents’ quality of life and rebuilding the town’s infrastructure. Despite his opposition, Lazzaro admitted that it looks like Seneca Meadows will close.

Update: The story has been edited to reflect that the High Acres landfill is one of several landfills to which New York City sends its trash via railway, not the sole location.