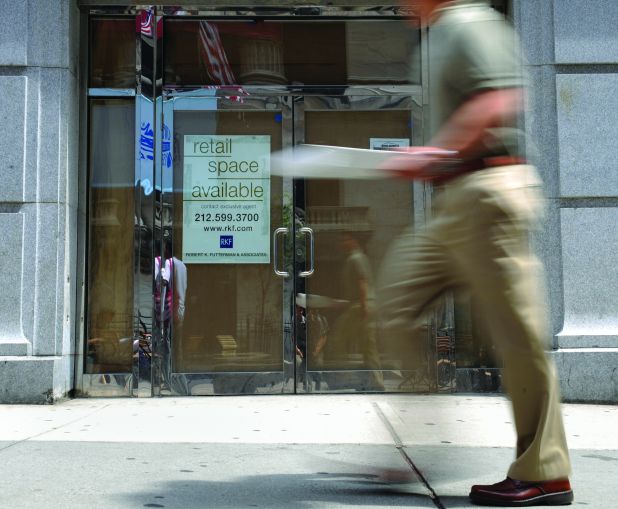 The New York City Council passed a bill requiring landlords to notify the city if there storefronts are vacant or occupied. Photo: Getty Images

Activists fighting to keep beloved mom-and-pop shops open around New York City just got some help from a recently passed bill which aims to arm them with more information in their battle.

The “Storefront Tracker” bill, which was approved by the New York City Council on July 23, will require landlords across the city to register the status of their ground- and second-floor retail spaces with the New York City Department of Finance. They’ll be required to report the square footage of the spaces and whether they’re vacant or occupied. If the latter, they must detail the monthly rents charged and when the individual leases begin and end.

“For the past 20 years, people have been talking about the loss of our independently-owned businesses and thinking about different solutions,” said Councilwoman Helen Rosenthal, who first introduced the legislation in March. “Every time we talk about it, there’s a meaningful absence of data.”

The information on the vacant storefronts will be aggregated in a public, searchable database, according to the bill.

The other information will be used by the city to create datasets, which will show the average length of leases, rents, how long the spaces have remained empty in neighborhoods, along with what leases are set to expire within two years. The datasets will be broken down by the more than 2,000 census tracts, or 15 Council districts.

The hope is that providing the New York City Department of Small Business with the lease expirations will help the agency step in to offer up help to tenants, such as aid in finding a lawyer or accessing credit, Rosenthal said.

“That could be a tool, if used properly, that could have meaningful results keeping our independently owned businesses in their current locations,” she said.

Under the bill, which is waiting to be signed into law by Mayor Bill de Blasio, landlords would have to submit the information as part of an existing annual report, the Real Property Income and Expense (RPIE) statement, to the Department of Finance. Also, if the occupancy or ownership if a storefront changes within the first six months of the year, landlords will be required to file another registration.

Omitting data would result in fines similar to if the RPIE wasn’t filed at all, which range from $300 to $100,000 depending on the value of the asset, according to the Finance Department.

Brokers and landlords expressed concerns with the new measure — especially over how much of the information collected will become public.

“I’m still a believer in letting the market do its thing,” said David Firestein, a managing partner of brokerage SCG Retail, who mostly represents tenants. “People get frustrated, so they want to kind of do a knee-jerk reaction, but it’s not going to make it better.”

Others worried that a simple map of where there are vacant storefronts won’t give potential new tenants “the full picture” of a neighborhood. It could potentially turn them off from a good deal by misrepresenting the health of a retail corridor or why a space could be priced higher than the neighborhood average.

“Sometimes there’s a vacancy because a particular retailer closed all their stores nationally and it’s not a problem with that location,” said Robin Abrams, a vice chairman at brokerage Compass. “A little bit of information is dangerous because it doesn’t necessarily properly lay out the situation. It can lead to a lot of assumptions and potentially a disconnect when it comes to a deal.”

But Rosenthal said the bill isn’t trying to “challenge the market.” Rather, she argues it’s helping the city find ways it could step in to help both tenants and landlords.

“The market will do what the market does, but we might learn that with persistently vacant locations, something different is going on that perhaps the city could be helpful with,” said Rosenthal, pointing to an empty storefront in her district on the Upper West Side where the owner was tied up in the landmarks process. “Perhaps there’s something there that the city should be looking at. But I can’t even think about [solutions] without the data.”

Landlords who spoke to Commercial Observer didn’t care much if the public knew a spot was vacant. They also said the new reporting doesn’t create too much extra work for them.

“We kind of have to do it anyway [with the RPIE] so it isn’t a big deal,” said one landlord, who spoke on the condition of anonymity for fear of being caught in the debate’s crosshairs.

However, he expressed concern with just how much of the lease terms will now become public knowledge and get in the hands of brokers who could easily see when a tenant’s lease is up.

“It basically gives them another platform to steal or poach your entire portfolio,” he said. “I just don’t want an additional resource for the brokerage community to have detailed knowledge of my rent roll.”

Currently, select information on tenants, square footage and lease expirations can be found on subscription-based commercial real estate websites such as CoStar, Real Capital Analytics and Trepp. But the information is fluid and occasionally inaccurate, meaning that changes made by tenants are not always recorded.

Another landlord, who also spoke under the condition of anonymity, said publishing rent rates could cause “unintended circumstances,” including tenants seeing they overpaid compared to nearby spaces. On the flip side, owners could get into trouble with their investors if it appears they undercharged tenants.

Rosenthal said the goal of the bill is to give more information to the public and to help city officials develop policies that can save small businesses. The city has no intention of publishing detailed lease information for properties, she said.

“It was more in the guidance of, ‘Let’s start to widen data collection,’ and as you start to see patterns, it can inform public policy,” she said. “The only information that will be public is if there’s a vacancy and that address.”

In the recent fight over a law to put more power in the hands of commercial tenants during lease renegotiations — called the Small Business Jobs Survival Act (SBJSA) — the lack of data became a sticking point.

During a City Council hearing for the SBJSA in October 2018, which has (controversially) been dubbed “commercial rent control,” supporters of the bill pointed to a statistic cited in The New York Times which claimed that 20 percent of Manhattan storefronts were vacant.

But CO later reported that nobody actually knows how many storefronts are empty in the city, and the source of that number, the late Faith Hope Consolo from brokerage Douglas Elliman, argued that she was misquoted; the figure represented availability.

This uncertainty was part of the reason Rosenthal introduced the “Storefront Tracker” bill and that supporters of the SBJSA hoped it would take the argument about the vacancy rate “off the table” so they can instead focus on the bill, said David Eisenbach, a professor of history at Columbia University who founded the Friends of SBJSA group.

“Hard numbers would be helpful so we could stop even having the debate,” Eisenbach said.

“We’re supportive on any legislation that’s going to help small businesses,” said Eisenbach, adding that he’s been in talks with Council Speaker Johnson’s staff to fine-tune the SBJSA. “We do know it’s all about the rent. These other bills are helpful but it doesn’t get to the root cause of the small business problems.”