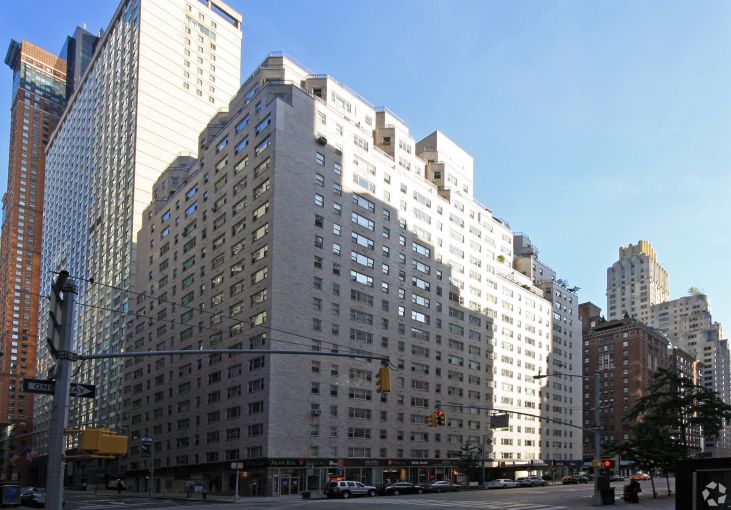 In the wide world of real estate, it’s an oddball story indeed when a landlord is poised to miss a big payment on a hundred-million-dollar loan and neither borrower nor lender seems even slightly cowed by the impending mishap. But that nonetheless seems to be the case at 100 West 57th Street in Manhattan, a large residential building that’s also home to street-level retail.

Natixis‘s $180 million securitized loan on the land under the building, known as Carnegie House, will likely be bereft of a big payout in the coming months, according to Kroll Bond Rating Agency — but in an unusual circumstance, the property’s financial lethargy was more or less expected.

Under the loan’s original 60-month term, full repayment on the debt, originated in 2015, is due on November 5 — about ten weeks from today. But Wells Fargo, the loan’s master servicer, has announced that it doesn’t expect the borrowers, a partnership between landlord David Werner and the Schron real estate family, to pay down what it owes so soon.

That wouldn’t trigger a default, because although the loan’s initial term expires in November, its maturity date doesn’t fall until April 2035. But failure to pay this fall will result in a significantly higher monthly interest rate of 5.62 percent, compared with the current 2.31 percent level — a difference that will equate to about $6 million in extra expense per year. A missed payment in November would also trigger a cash-flow sweep that will ensure that any income from the property must go directly toward paying down the outstanding principal amount.

What’s surprising, though, is that the debt seems to have been, in essence, designed to work like this. The Werner-Schron partnership owns the land under the building and ground-leases the property to the residential cooperative that controls the 21-story building’s 323 private apartments. Under the current terms of the ground lease, Werner and the Schrons earn a flat fee of about $4 million per year from the co-op apartment owners — a sum that falls just short of being able to cover the debt service. (They’ve made up the difference over the last five years, according to KBRA, by relying on reserve funds.)

Locked into an ultra-long-term ground lease, Werner and the Schrons have little ability to alter the terms of their agreement until 2025, when they’ll meet the co-op owners across a negotiating table to discuss whether the residential denizens will execute the first of two remaining 21-year renewal options. If the co-op owners agree, the ground lessors will be home free, because annual rent will automatically be reset at 8.2 percent of what the fair market value of the land — two blocks south of Central Park between Seventh Avenue and Avenue of the Americas — would be were it vacant.

The most recent appraisal sets that value at $260 million, which would mean that starting in 2025, ground rent would be $21.2 million per year. That’s more than five times the current level. In effect, then, Natixis’s CMBS financing is a bet that the co-op owners will be happy, six years from now, to swallow a substantial increase in monthly maintenance fees: up to $5,475 per unit, compared with $2,150 today.

Nonetheless, the KBRA analysts tracking the deal, led by Robert Grenda, aren’t especially concerned, noting that the co-op dwellers would have to turn their keys over to the ground-owner partnership en masse should they balk at the higher maintenance.

“KBRA believes there is a low risk of a monetary default at this time,” Grenda wrote. “This is due to the contractual terms of the lease agreement and the economic incentives that the lessee has to maintain current payments, as the failure to do so would ultimately result in the transfer of ownership of the improvements to the borrower under the subject loan.”

The uncertainty, nonetheless, has created an unusual set of opportunities for bargain-hunting apartment shoppers. With the economics of the property at least a little bit unpredictable beyond 2025, the 2015 CMBS loan triggered a sell-off among co-op owners, as per Bloomberg, and property values haven’t yet recovered. Last month, someone bought a studio apartment in the building for just $249,000 — a price level more on par with Manhattan, Kansas than with the heart of New York City. Likewise, a two-bedroom unit of 1,250 square feet was listed for $729,000 — and sold for just $649,000 in July, more than 10 percent less.

Representatives for Natixis and for the ownership group’s partners didn’t immediately respond to inquiries.