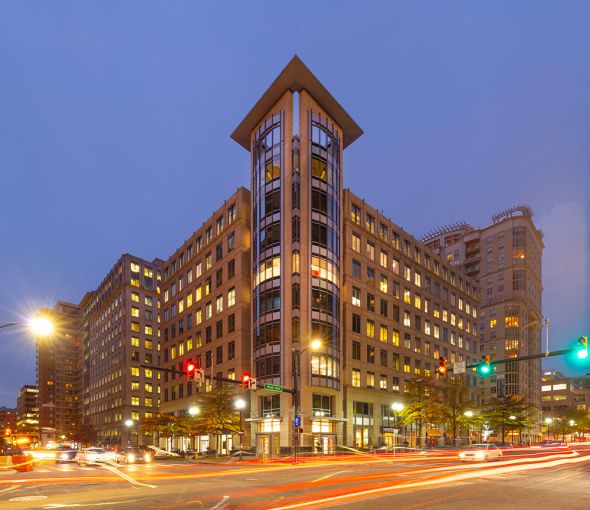 A joint-venture between Hines and Oaktree Capital Management has acquired Two Liberty Center, a 178,700-square-foot Class A office building in Arlington, Va., from Westbrook Partners for $93.2 million, according to JLL, which represented the seller in the deal.

The firm also secured a seven-year, floating-rate $66.7 million acquisition loan through Bank of America for the buyer.

The nine-story property is currently 95 percent leased to 16 tenants including TechSpace, Raytheon and Strategic Analysis. It offers 20,000-square-foot floor plates and is one of only three assets in the submarket with a rooftop deck.

Westbrook, which acquired the building for $72 million in 2017, completed its repositioning of the property in January. The work included a new lobby, new spec suites and parking for more than 300 vehicles.

The building’s location, at 4075 Wilson Boulevard within the Ballston neighborhood’s Liberty Center complex, is a “main & main” prominent corner location. There are onsite amenities, including the Sweetgreen and Rustico restaurants, plus nearby walkable amenities within the eight-building complex.

The under-construction complex is expected to deliver upwards of 500,000 square feet of retail and entertainment options, as well as more than 2,000 new residential units in the next year.

A good chunk of the White House’s budget for defense spending flows through the Northern Virginia area, the source said. Furthermore, the region offers a highly attractive environment for doing business, and Northern Virginia has been the beneficiary of numerous corporate relocations, mostly notably Amazon HQ2.

Energy Star and LEED-Gold certified, Two Liberty Center sits just two blocks from the Ballston Metro and is situated along the Rosslyn-Ballston Corridor with access to I-66 and Route 50.