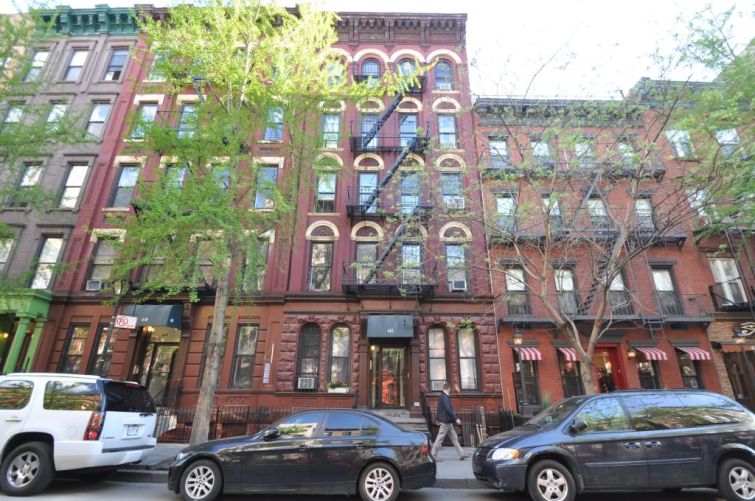 The city is suing the owners of three Hell’s Kitchen walkups for operating illegal short-term rentals in rent-stabilized apartments, according to a lawsuit filed Tuesday in the Manhattan Supreme Court.

City officials charge that the owners of 410 and 412 West 46th Street and 452 West 36th Street have engaged in a systematic pattern of neglecting their buildings, harassing tenants into moving out, deregulating units, and keeping them vacant in order to rent apartments to travelers on a short-term basis. One of the buildings was damaged in a fire that left tenants without gas or a roof for six months in 2015, and the other two have racked up dozens of hazardous building code violations.

Illegal Airbnb rentals have occurred in at least 11 of 50 apartments across the three five-story buildings, all of which are located between Ninth and Tenth Avenues, per the complaint. Those 11 units have been “converted” to illegal short-term rentals, city inspectors found, when they should have been leased as rent-stabilized units.

The properties are owned by Keystone Management, Highpoint Associates XII, Richard Lagana and Daniel Ohebshalom, all of whom are named in the suit. Keystone and Highpoint appear to be based in Sherman Oaks, Calif., but they also have offices in Albany and on West 23rd Street.

Langan didn’t respond to a request for comment, and Highpoint, Ohebshalom and Keystone couldn’t be reached.

The Mayor’s Office of Special Enforcement (OSE) found at least nine Airbnb listings for the apartments, which were rented to over 700 guests to the tune of $300,000 over three years, according to the suit. OSE is charged with enforcing the city’s nuisance abatement law, which encompasses illegal hotel activity.

The number of rent-regulated apartments in the buildings has fallen significantly since 2011, the city argues, coinciding with when the OSE began receiving complaints about illegal short-term rentals in the properties. Only five units out of 50 remain rent-stabilized, Division of Housing & Community Renewal (DHCR) records in the court filings show.

The lawsuit is one of dozens that the City Law Department has filed against landlords in recent years, as Mayor Bill de Blasio’s administration continues its crusade against owners who are flouting the state’s short-term rental law, which prohibits landlords from subletting an apartment for less than 30 days at a time.

The properties’ owners landed on the New York City Public Advocate’s worst landlords list twice, in 2015 and in 2018.

Highpoint Associates topped the list in 2015, after 412 West 46th Street was badly damaged by a fire, cited for lacking sprinklers and fire alarm systems, and the firm had racked up more than $100,000 in fines for illegally renting out apartments for less than 30 days at a time, as DNAinfo reported in February of that year. The top two floors of the building remain uninhabitable by New York City Department of Buildings (DOB) standards, and the property remains under a partial vacate order. The city argues that the conditions in all three buildings are unsafe and constitute a form of tenant harassment.

The buildings also have 250 outstanding violations from the New York City Department of Housing Preservation and Development for hazardous conditions that include fire damage, large cracks in the rear wall of a building, unsafe exposed electrical wiring, and “broken or defective eroded brick and mortar joints at wall.”

Since 2012, the DOB has issued 100 violations for illegal transient occupancy across the trio of five-story buildings, along with $250,000 in penalties, the filing notes.

The city is seeking more than $1 million in punitive damages in the lawsuit.

“Short-term illegal rental platforms like Airbnb make it all too easy for landlords to harass and displace rent stabilized tenants,” said a spokesman for the mayor’s office. “We will continue to use our enforcement tools to hold these landlords accountable as part of large effort to preserve and protect affordable housing.”