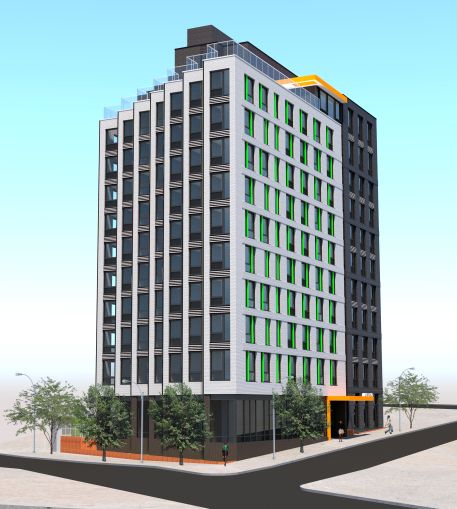 Dunn Development Corp. has closed construction financing for Austin 147, an 80-unit supportive and affordable housing property in the Mott Haven section of the Bronx, Commercial Observer has learned.

The SLCE Architects-designed asset, at 880 East 147th Street, will comprise supportive housing and affordable housing for low- and moderate-income families. Forty units are set aside for previously homeless adults and families with special needs. New York YIMBY first reported that permits had been filed for a 116-foot-tall, 76,714-square-foot development at the site in March.

The Brooklyn-based developers broke ground on the 11-story building two weeks ago and construction is expected to wrap next summer. A mix of both private and public sources are funding the $37 million project.

“Austin 147 will bring much needed affordable housing to the South Bronx,” Mark Migliacci, the Capital One community finance capital officer who worked on the transaction, said in an emailed statement. “We’re committed to affordable housing and were thrilled to have worked with the talented team at Dunn Development and all parties to make this unique and exciting South Bronx development possible.”

“Austin 147 will not only provide deeply and broadly affordable housing along with on-site support services, but the building will be a beautiful and highly visible addition to the Bronx skyline,” Dunn Development Corp. President Martin Dunn said in prepared remarks. “We’re thrilled to work with HCR and HPD to develop a project that will positively impact so many people.”

“An integral part of the Mayor’s ambitious housing plan is creating affordable housing that’s paired with critical supportive services that some of the most vulnerable New Yorkers need to thrive. Austin 147 will bring 80 much-needed affordable homes to the Bronx, 16 of which will be affordable permanently through the administration’s bold Mandatory Inclusionary Housing policy,” NYC HPD Commissioner Louise Carroll said.

Officials at J.P. Morgan and Capital One weren’t immediately available for comment.