Detroit Rock City: Behind GFI’s Turnaround of a Neglected Hotel

A market rebound and some FOMO around Dan Gilbert’s buying spree led GFI to make a savvy investment in Detroit; one that paid off very nicely indeed last month 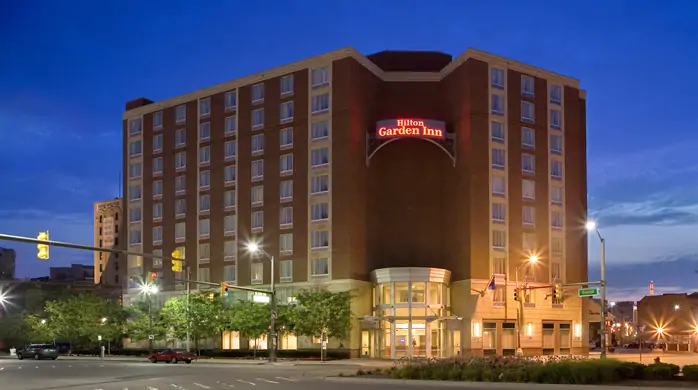 GFI Capital Resources Group is well-known for its activities in New York’s hospitality sector, as the owner of the Parker New York, the Ace Hotel and The Beekman. But the firm turned its attention slightly further afield in 2016.

The developer and landlord saw an acquisition opportunity in the Hilton Garden Inn Detroit Downtown, a 198-key, 10-story hotel that was in CMBS special servicing at the time. A $5 million property improvement plan and two years later, GFI had doubled the property’s net operating income.

The firm sold the asset last month in one of the highest recorded transactions per key in Motor City’s history.

GFI acquired the asset at auction for $24 million, according to a source familiar with the trade, and while GFI officials declined to comment on the specifics of the recent trade, local sources told CO that the firm sold it for $51.4 million to an investor group which included Inland Realty Group. (Officials at Inland did not return a request for comment by press time.)

Not too shabby a profit, eh?

CO chatted with GFI Chairman and CEO Allen Gross about the property’s turnaround.

“We’re not cap rate buyers,” Gross said. “When we look at assets, I don’t necessarily look at the net operating income [NOI] and the cap rate; I see what it is now and I see what it could be. During the due diligence period, you get to see how you can run it differently, both on the income side and the expense side.”

The property’s low NOI stood out immediately to GFI. It was only $2.4 million despite the hotel’s prime location downtown.

“That was crazy for a piece of property like this. It was at around $130 ADR [average daily rate] and we knew it should be at least $180 ADR,” he said.

The property’s loan was in the CGCMT 2007-C6 CMBS deal, and by the time GFI looked at the hotel, it was in special servicing. CWCapital had been handling the loan following its transfer in April 2010 for monetary default, according to servicing reports. The property went into foreclosure five months later. (Representatives for CW did not return a request for comment.)

“So, when we bought the property, we said, ‘This is really underperforming.’ The expenses side was outrageous, and one of the reasons for that was that the property was being run by a [CMBS] special servicer who had taken over the deal.” Gross said. “[Special servicers] aren’t hoteliers operating it; they hire somebody else who hires somebody else who hires somebody else. So, when we saw the expenses, and all the fees that were going out, I said, ‘Hey, this is a great opportunity.’”

Despite the foreclosure, the hotel wasn’t in bad shape. “It was only built in 2004, but it was very much a property not owned by anybody and being controlled by [the] lender. It was neglected. And when there’s no owner, it’s not a good thing for employees; they’re not motivated because they don’t know when the other shoe is going to drop. So when we took over, there was a quick adjustment so everyone knew we were all going to be rowing in the same direction, or there were going to be changes. And we got changes.”

GFI’s interest in Detroit extends back to when the market started to return post-crisis. The firm saw an increase in the rents that tenants were willing to pay, Gross remembered. “And at that time, [Quicken Loans founder and billionaire] Dan Gilbert started buying very heavily in Detroit. So I said, ‘Okay. What does he know that I don’t know?’ ”

Gross went to tour the Hilton Garden Inn and saw a cluster of sports stadiums — and therefore potential for revenue — surrounding the property. The stadiums included Ford Field, Comerica Park and Little Caesars Arena — home to the Pistons basketball team — not to mention the music venues and restaurants surrounding the venues.

“I saw the opportunity, especially when I went up on top of the building,” he said. “I said, ‘You know something? You can be here in the winter watching football and in the summer watching baseball. You can actually stand on top of this building with binoculars and see the stadium so hey, we can sell seats up there.’ ”

He quickly added, “That’s a joke!”

So Gross purchased the property, paying roughly $2 million more than the property was deemed to be worth at the time — a decision he attributes to wisdom from the late Harry Helmsley.

“[Helmsley] was once asked, ‘How did you put together such a great portfolio?’ And he said, ‘I always overpaid.’ And I told my guys ‘Sorry. But if you want a good asset, you overpay sometimes,’ ” Gross said.

The auction was a stressful one, with Dan Gilbert’s shadow looming in the back of Gross’ mind.

“Those auctions are sick because you never know who’s showing up,” he recalls. “And I was always afraid that Dan Gilbert was going to be our biggest competitor because he was buying everything that didn’t move in Detroit. He wasn’t there but he might have set up a straw buyer.”

First on GFI’s agenda was letting it be known that the old guard was gone, and the new guys were ready to invest in the asset and improve the city’s perception of it. The firm came in with a plan of action and spent over $5 million renovating the hotel, putting in new furniture, new carpeting, new wallpaper, new bathrooms and giving it new life.

GFI also upgraded food and beverage components and made staff changes. By the end of 2018, ADR had increased to $185 per night, and the NOI increased to $5 million from $2.4 million in 2016.

“So we doubled it,” Gross said. “You have to see what’s around you, and just the improvement of the Detroit economy in and of itself. At that time there was no such thing as opportunity zones — that came later [the hotel site is now located within a designated OZ]. But you have to be able to see things not just on paper but much further ahead. The new buyer is going to do very well.”

And as for the potential for sporting guests that Gross saw from the rooftop? The GFI team reached out early to all of the professional sports teams, letting them know that when they’re in town, there’s a newly-renovated hotel located across the street from the stadium they’re attending, where they can find privacy and security. As such, “we had most of the baseball, football and hockey teams stay in the hotel,” he said.

So, you might ask, why sell this flourishing hotel?

“Because this is what we do. We create value, and we’re not afraid to sell,” Gross said. “We don’t have to squeeze every bit of juice out of every lemon. Some owners get married to the real estate, but it’s bricks — I don’t consider it one of my kids. It’s important for the market to understand that we buy with a strategy. And when the time is right, and you get the right offer, you pull the trigger.”

The sale means that GFI no longer has properties in Detroit — although it’s busy elsewhere, with hotels in Palm Springs, Calif.; Greenville, N.C.; Kansas City, Mo.; and Denver.

Looking back, the returns GFI achieved and what was accomplished at the distressed asset is not something to be sneezed at, but Gross hopes the transaction will also encourage others to enter the Detroit Hotel market.

“We’re proud of being part of creating that, and we hope there’s continued growth,” he said. “And who knows? One day we might be back.”