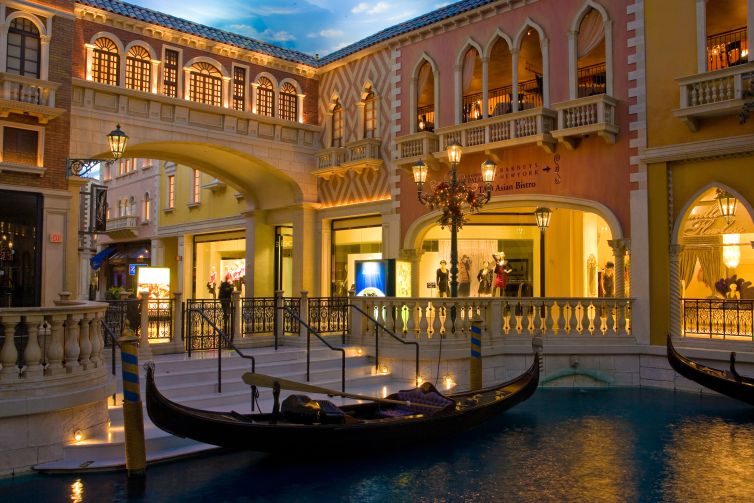 A thriving shopping center in Las Vegas is substantiating the notion that experiential retail is a billion-dollar buzzword.

The Grand Canal Shoppes, an indoor mall attached to the Venetian Hotel and Casino on the Las Vegas Strip, has pulled in a $975 million CMBS refinancing led by Morgan Stanley, Goldman Sachs, J.P. Morgan Chase and Wells Fargo, according to Kroll Bond Rating Agency, which reviewed the transaction.

That quartet of lenders backed the deal’s $760 million senior component, but the capital stack also includes a $215 million portion controlled by the Canadian Pension Plan Investment Board, according to KRBA. The 10-year deal comes with a 3.74 percent interest rate on the senior debt, with only interest payments required until the loan matures in 2029.

The deal replaces a $627.3 million chunk of outstanding debt originated by Goldman Sachs seven years ago, allowing Brookfield Property Partners and Nuveen Real Estate, the co-owners, to cash out $333 million of equity.

The 760,000-square-foot Grand Canal Shoppes, built 20 years ago, immerses shoppers in a campy indoor simulacra of a Venice cityscape, presaging today’s ambitious efforts to wow shoppers off the couch in the dawning era of e-commerce. Gondola rides are on offer to visitors willing to pay $36 per person to be sculled along a replica canal for 15 minutes, and the mall also features detailed models of Venetian landmarks.

Part of the collateral space—81,000 square feet—is rented by the Venetian Hotel’s casino, the shopping center’s single largest tenant. (None of the lodging component serves as security for the debt.) The other biggest lessees are Tao, a nightclubby Asian restaurant; a Madame Tussaud museum of celebrity waxworks; and Regis Galerie, which sells collectibles.

Ninety-four percent occupied, the mall counts a total of 200 shops and restaurants on its tenant roster. Indeed, the retail apocalypse has left the Shoppes, as of yet, unscathed: Net cash flow averaged $76.1 million annually between 2015 and 2017, the most recent years with available data.

Brookfield bought the property on its own in 2004 for $776 million. The new financing, with a 59.5 percent loan-to-value ratio including the junior debt, puts a $1.64 billion price tag on the Shoppes, more than double its value at Brookfield’s acquisition.

Representatives for Brookfield and Nuveen didn’t immediately respond to inquiries.