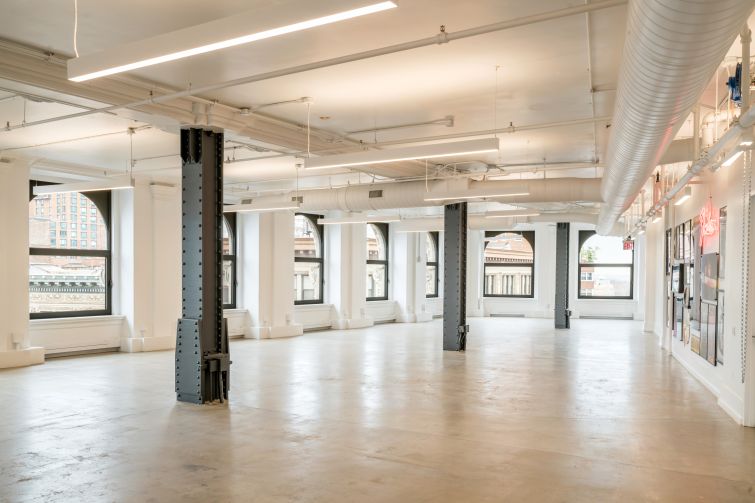 This is a prebuilt office space on the 11th floor with a rock and roll theme. The steel columns were made by the Carnegie Steel Company in the 19th century. Photo: Cameron Blaylock/For Commercial Observer 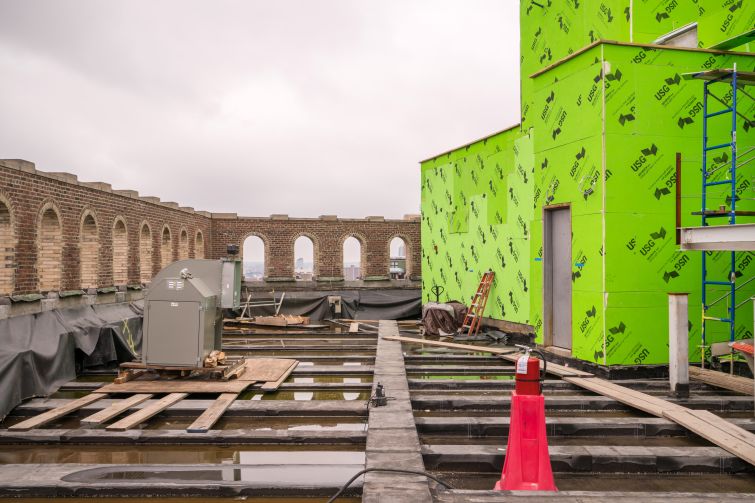 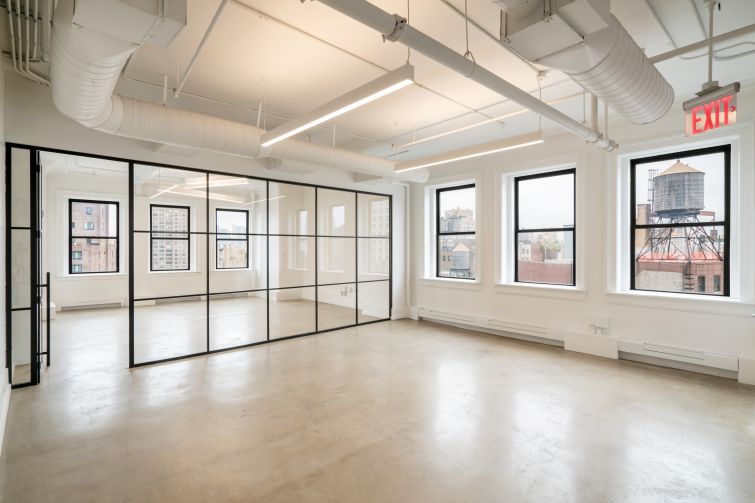 Part of the prebuilt office is divided into a conference room with a paneled glass wall. Photo: Cameron Blaylock/For Commercial Observer 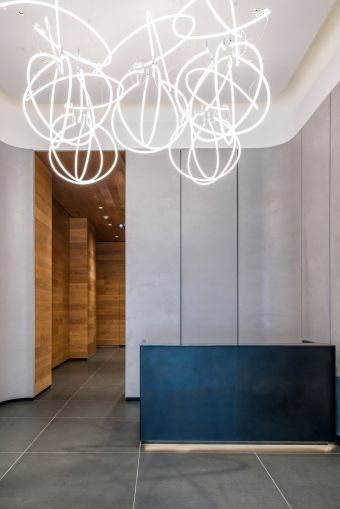 The 18-foot-tall lobby was renovated with wooden and concrete walls and a neon chandelier-sculpture made by Precision Neon. Photo: Cameron Blaylock/For Commercial Observer
Previous Next

Three years after Taconic Investment Partners, Nuveen and Squire Investment purchased 817 Broadway, their redevelopment is drawing to a close just as the building was designated a historical landmark on June 11.

“We are really excited to bring this to the community and launch it,” said David Falk of Newmark Knight Frank, the exclusive leasing agent for the owners. “We know that when brokers get to this building, they are going to be wowed because these floors are special.”

The 140,000-square-foot building, located between East 11th and 12th Streets in the East Village, traces its history back to the late 1800s, according to Christopher Squeo and George Tsapelas of Taconic. While only 14 stories tall, it was considered one of the city’s first skyscrapers when it was designed in 1895.

It’s one of the few remaining structures designed by architecture pioneer George Post. His accomplishments include helping to design the first building with passenger elevators, the Equitable Life Assurance Society building and the 20-story New York World Building, which was the tallest building in New York City at the time it was built, according to Curbed.

The owners took steps to maintain many of the building’s historic features, according to Squeo and Tsapelas. The steel beams—made by the Carnegie Steel Company before their merger with the United States Steel Corporation in 1901—were maintained on the upper floors of the building. Also, the limestone and terra cotta-paneled facade was cleaned and left intact. Lights were added to the exterior of the building to highlight the detailed patterns and carvings in the facade.

The building was constructed as the industrial and office building for clothing manufacturer Meyer Jonasson & Company, and it has now been reconfigured with 3,240 square feet of ground retail space and 13 floors of office space, according to Falk. The redevelopment called for the removal of water-powered elevators and coal-fired boilers, while the office floors are made of concrete and include air conditioning, baseboard heating and internet access.

“This is basically a building that is, in a sense, brand new from the inside,” Falk said. “There are tenants out there that just don’t want to be in a glass building…This building would check that box for someone that wants new and old at the same time.”

Ribalta pizzeria has renewed their lease on the ground floor, Squeo and Tsapelas said. SDC Capital Partners has already signed a lease for almost 10,000 square feet on the 10th floor and will move in by the end of the year, as Commercial Observer reported in May.

The office spaces have large windows that overlook the bustling neighborhood. Additionally, tenants will have access to the 4,000-square-foot rooftop, which is bordered with brick arches that are original to the building. Tenants of the top floor, and possibly the floor below, will have reserved access  to half the roof deck, according to Squeo and Tsapelas.

The property sits catty-corner to 828 Broadway, home of the famous Strand Book Store, which was also designated a historical landmark in June despite vehement opposition from its owners, according to media reports.