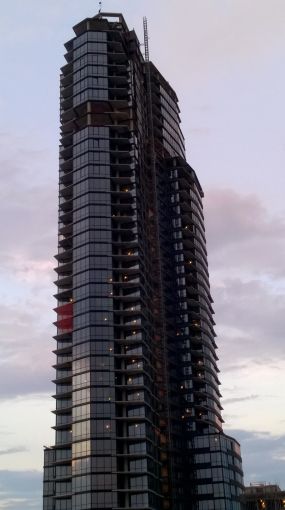 One of Greenpoint’s most notable new residential projects has landed a $175 million refinancing from HSBC, city property records show.

The project, at 21 India Street and 23 India Street on North Brooklyn’s East River waterfront, consists of a 40-story tower split between condominium units and rental apartments, as well as a broad adjacent five-story building filled entirely with rentals. The project is backed by developers Mack Real Estate, Palin Enterprises and Urban Development Partners.

Palin bought the property for $84.6 million in 2006, and the development partners, who convened in 2014, grabbed a $290 million construction financing package from the New York State Housing Finance Agency in 2016, The Real Deal reported at the time. That debt was transferred to J.P. Morgan Chase in April. The balance was reduced this week before the HSBC refi when Palin and Mack paid down a $90 million portion of the balance, according to a satisfaction-of-mortgage document.

Drew Anderman and Josh Berman of Meridian Capital Group arranged the debt on behalf of the sponsors, according to a Meridian spokesman, who added that the transaction is a floating-rate balance-sheet deal.

As part of the initial deal with the HFA in 2016, Mack and Palin agreed to set aside about 125 of the complex’s 640 apartments for low-income renters. Last January, 6sqft, a real estate website, reported that the property, known as The Greenpoint, had begun accepting lottery applicants for the affordable units, which are set to go for between $613 for a studio and $1,230 for a two-bedroom unit.

Market-rate renters have much higher prices to contend with: $3,000 for a studio and nearly $5,380 for a two-bedroom apartment in the Ismael Leyva-designed project, according to the building’s website.

Amenities include a gym, an on-site garage, a basketball court and a lounge.

Although the skyscraper isn’t even one of Brooklyn’s 20 tallest, it’s a striking addition to the skyline above Greenpoint, a formerly industrial area that’s quickly following the path trodden by neighborhoods like Williamsburg and Long Island City to become a well-heeled residential mecca east of the East River.

Average monthly rent for a two-bedroom apartment there has shot up nearly 15 percent over the last twelve months to $3,700, according to residential brokerage MNS.

Representatives for Mack Real Estate, Palin and HSBC did not immediately respond to inquiries.