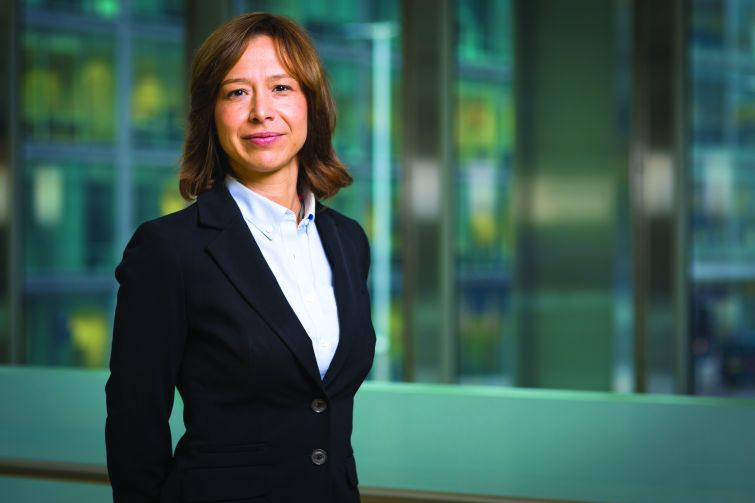 It was the company’s first office outside the U.S., and Alcantara was brought on to help launch it with two colleagues following the financial crisis.

She currently handles two funds: One, co-sponsored by Taconic Investment Partners, targets value-add investments in New York, leveraging Taconic’s local expertise; the other is a core and core-plus fund aimed at opportunities across the country.

Alcantara joined TIAA from Lehman Brothers Global Real Estate Group not long after the investment bank went bankrupt in September 2008. Before that, she worked with private equity real estate firm O’Connor Capital Partners. She established her connection to TIAA while managing large real estate funds at O’Connor; TIAA was one of her clients.

The penta-lingual portfolio manager spoke with Commercial Observer earlier this year to discuss her property and investment strategies and the state of industrial real estate.

Commercial Observer: Tell us about your current role and how you ended up there.

Adriana De Alcantara: In 2012, we were looking to expand our third-party business in the U.S. I was asked to come to the U.S. as I was one of a few to have [that] experience. At the time, I was head of separate accounts, managing major institutional clients like Allianz.

We were starting to launch our fund business. And one of the first funds we launched was one I still manage now, [our core and core-plus U.S. fund]. It’s a 401K product and is the first 90-40 mutual fund to have a direct exposure to real estate. We had a long approval process with the Securities and Exchange Commission; it took us about four years. We got it approved at the end of 2015 and we officially launched in July 2016. It’s been the most active equity fund in our platform and we invest across the U.S. in all sectors. We have $1.6 billion in assets under management and 30 properties. It is a daily NAV [net-asset-value] fund.

If you look at the retail market in New York, that’s the only market where you can see rents growing. In any other market in New York, you can see rents declining. The retail market is not easy, but it’s growing. In this fund, we have another office building at 86 Chambers Street; that’s a great location and it’s more core-plus, but we are doing some renovations to increase rents. It is a value play, but in a great location. Another we have is retail at 10 Madison Square.

I’m a big believer of: If you have a strategy, just follow it. We’re here for the long term. My strategy, first of all, was to diversify funds. The idea back in 2016 was to invest $1.5 billion in two years. We wanted to target broader, smaller properties with an average size of $50 million. It is a benchmark fund so I’m trying to follow that, with some areas underweight and other overweight. I wanted to be a little underweight in the office space while never compromising location.

We’ve acquired a portfolio of two small office buildings in Boston that are doing well. What we did with [these buildings at 101 Summer Street] is focus on increasing cash flows and [implementing] investment grade tenants. We’ve changed the risk profile of those buildings. And we even used it as a case study showing the benefits of [investing in] real estate.

It’s a great hedge, even for a multi-asset portfolio. The leases increase each year, so we’re hedging there, and it’s a 10-year term, so we’re increasing cash flows.

Where is your portfolio overweight?

Where we’re overweight is in multifamily, with the idea that at some point the cycle, [that] is going to change. It’s a great defensive sector. We’re also overweight in industrial, where rents are still growing. But with retail, for me, it was always about maintaining a benchmark but really looking at the defensive nature of retail—that’s grocery anchored and urban retail. An example is 10 Madison Square, so we’re never compromising on location.

So, how would you characterize the landscape for industrial assets?

It’s definitely very difficult to source for industrial. What differentiates us is we have quite a good industrial platform. We do have an Amazon building in Los Angeles, a small building [$32 million], and it’s low-yield—at 4.5 percent when we bought it. Still, it’s an Amazon on a long-term lease. The industrial sector right now is providing me with stability, and the reality is the market is providing the appreciation, because there’s so much money out there. Having said that, there’s not a lot of supply but quite a lot of demand. But, we have still been able to source for it. [The deals are] usually on the smaller side, like we were involved in a deal that was just $10 million [in a secondary market], but that’s okay. We get into the market and get access to it; you diversify the portfolio and you grow it. For me, it was always about putting together a diversified portfolio, [there]. We’ve acquired around $300 million in industrial [over the last couple years].

Can you tell us more about the New York City-focused fund with Taconic?

We are targeting 15 percent net returns after all fees and promotes, and we’re going to focus on all sectors, but primarily it’s going to be office. We’re looking as well, for example, at the condo market. We all know that that market is pretty expensive in New York, but there might be some disruption there. We have seen debt funds raising money to invest in the “condo disruption market.”

We’re targeting obsolete stock in emerging locations but in consolidated locations in New York [as well]. We want to redevelop, tenant and then sell.

Given your emphasis on location, how do feel about suburban office?

I think it depends on your strategy. For me, the location and the liquidity of the investment is what is important. Can it get higher yields in suburban locations? Yes, you can. Can you sell it? You probably cannot. In the past, working for TIAA, we had suburban office, but the realities around selling are you only have a handful of investors. I’d personally rather go for the better, urban location, if we can get a good quality building and a good quality tenant. It doesn’t need to be the best, because we are there to increase the value. I wouldn’t do suburban right now, but I understand why others would do it.

Multifamily in Manhattan is not easy. I wouldn’t say I’d stay away, but it’s [very expensive there]. If you have a value-add strategy, you’re not going to make [sizable] returns; that’s the reality.