Why Life Insurers’ Market Share Is Blooming Amidst Intense Competition 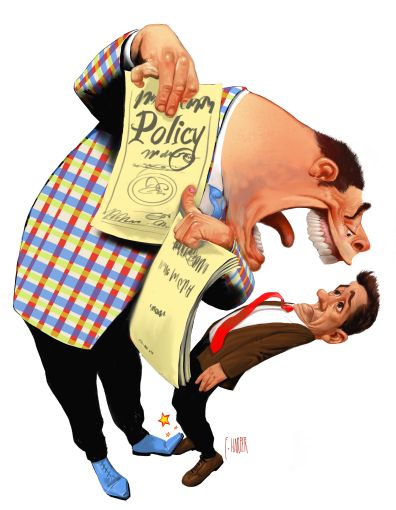 LIFE’S WORK: Banks have reached a plateau in the last four years, but life insurers have continued to gain a larger slice of the mortgage market. Illustration: Fred Harper

Twice in the last 12 months, the principals of Cardinal Point Management, a real estate investment firm based in Tampa Bay, turned to the debt markets for acquisition mortgages on office buildings the company was buying in Fort Lauderdale, Fla.

In August of 2018, it was looking for a $41 million floating-rate deal to fund its purchase of Coastal Tower, a 262,000-square-foot building it was hoping to renovate and reposition. And in March, Cardinal came back to lenders with a similar request, searching for a $34.4 million financing with which to buy Trade Centre South, another Fort Lauderdale commercial property.

In both cases, the developer sought an interest-only structure that would allow it to avoid paying down principal until it was time to refinance a stabilized asset down the road. And in a lending field crowded with new debt funds and other ambitious lenders, it’s no surprise that Cardinal found a willing lender both times it went looking.

But the loans weren’t from a debt fund. Instead, they came from New York Life, one of the insurance companies that’s leaned most aggressively into an effort to grow market share even in a competitive lending arena. And the company is seeing results. Last year, its commercial mortgage acquisitions jumped more than 10 percent, an impressive showing at a time when lenders are grappling for every opportunity. (By press time, a company spokeswoman hadn’t responded to a request for comment.)

“If you think about it, the life companies are fishing out of the same pond as everyone else,” Robert Vrchota, a life-insurers analyst at Fitch Ratings, said. “Borrowers are demanding — and able to get — [interest-only] loans, especially [when loan-to-value ratios] are sub-60 percent. To stay competitive with the other lenders, insurers have to offer full interest-only. And I think they’re comfortable doing it.”

Commercial real estate lending has always been a balancing act for life insurers — an intricate matter of precisely matching the debt investments on their balance sheets’ asset side to their time-sensitive obligations to make payout to policyholder customers on the liability side. And unlike many of their peers from debt funds or specialty CMBS lenders, lifeco investing executives have a whole basket of allocations to choose from, with corporate and public debt aggressively vying for space in their portfolios as well.

But even at a time when competition from other quarters has driven margins on commercial real estate loans razor thin, insurers are cribbing to a boundless appetite for mortgages. As a result, their lending volumes have continued to rise, nearly across the board.

“As much as we can find that’s attractive,” is how Christine Haskins, the chief investment officer at PGIM Real Estate Finance — the commercial real estate mortgage arm of Prudential — described her and her peers’ appetite for real estate debt. “I would say, as a whole, that every year the allocations have been more and more.”

Industry-wide data backs up that observation. During the recovery that followed the financial crisis in 2008, lending from banks, debt funds and commercial mortgage-backed securities grew steadily from 2010 to 2015. But then bank lending plateaued, and commercial mortgage-backed securities’ share of the market declined, as per data from the Mortgage Bankers Association. Lifecos’ share of the pie, on the other hand, continued to grow at an accelerating share, and hasn’t tapped the brake pedal yet.

A report released this month from Fitch Ratings noted that commercial real estate loan purchases among the large group of insurers that Fitch covers rose by approximately $30 billion, led by a nearly 25 percent increase in the volume of multifamily loans that the rated insurers brought on. Insurers’ construction-lending volume was up by about 10 percent as well, in tandem with gains in mezzanine loans and office and industrial debt.

“Growth is industry-wide, not limited to the top players,” Nelson Ma, the Fitch analyst who served as lead author on the report, told Commercial Observer. “One interesting finding this year was that even outside of the top 10 players [among lifeco lenders], a lot of smaller insurers found mortgages to be good relative value.”

A global search for yield that has driven the long-term trend toward more real estate lending for insurers seems unlikely to abate any time soon. In recent months, the Federal Reserve has again faced pressure to cut benchmark interest rates even as they have remained stubbornly low throughout America’s 10-year-old business cycle. And Chairman Jerome Powell’s testimony before Congress earlier this month suggested that the board is weighing a dovish policy turn later this year. And, across the Atlantic, the European Central Bank’s primary rate has remained in negative territory for five years: European banks have paid the euro depository $24.2 billion during that period for the privilege of parking their cash there.

But insurers’ insatiable demand for mortgages also owes something to perceived weaknesses among investment alternatives, according to PGIM.

“The attraction of private commercial real estate holdings has been [that they’ve had] a lot of relative value compared with corporate bonds,” Haskins said. “There are some concerns about the leverage [on corporate bonds], and [insurers] are looking for options that provide value relative to that.”

But an appetite for a bigger slice of the action only goes so far in an era when dozens of bidders might be ready to pounce on any given lending opportunity. Winning higher market share against that backdrop is a doubly impressive feat for lifecos because they’ve historically hewed close to their bread-and-butter preference for 10-year, fixed-rate debt: one of the most deeply trod segments of the market.

To that end, lifecos have made serious steps toward broadening their palette.

“I think the primary reason you’re seeing market share improving — despite a lot of competitive headwinds — is that a lot of lifecos sell a lot of [insurance products and get a lot of kinds of funding,” said Gary Otten, the head of real estate debt strategies at MetLife Investment Management. “That’s driven them to be able to offer different types of loans to the market.”

MetLife, Otten added, had in the past considered itself one of the few life-insurer lenders to take on a significant portion of floating-rate business. But in the last few years, it’s become no longer such lonely territory.

“We’ve always done a lot of floating rate. We’re probably in the neighborhood of 50 percent floating, 50 percent fixed,” Otten said. “Now, other lifecos are doing more and that’s allowed them to expand their capabilities.”

Haskins picked up on the same notion, observing that PGIM and other insurers were increasingly willing to try to win floating-rate deals.

“Some of the life companies weren’t always in the situation [of making floating-rate loans], but they’re increasingly willing to do a bit more of that,” Haskins said.

The PGIM executive added that she’s also seen insurers compete more directly on construction and bridge loans—two further examples of debt types that don’t necessarily fit insurers’ vanilla reputation. One reason is the extent to which Freddie Mac and Fannie Mae have increasingly cornered the market on long-term apartment lending, a pond in which insurers would happily swim.

“Since there’s not a lot of apartment flow in the market, [insurers] have had, perhaps, to do some transitional or pre-stabilized” lending, Haskins said.

PGIM itself has produced a few examples, including a three-year $88 million bridge loan it made last October to fund the lease-up phase for 71 Fifth Avenue, a Union Square-area office-and-retail asset coming back on the market after an $11 million upgrade project. Other big insurers have gone farther, backing pure construction loans. In March, New York Life originated a $122.9 million floating-rate development financing for a new office building project underway in Austin, Texas, REBusiness Online reported. Others have emphasized construction loans as well: They account for almost a fifth of Pacific Life Corp’s $12.6 billion mortgage book. (No other insurer that Fitch tracks topped Delaware Life’s 8.4 percent construction-and-development allocation.)

Insurers are also increasingly moving away from the 10-year lending model. The increasing diversity and complexity of their liabilities, Otten said, requires more supple approaches to asset-liability matching—which conveniently opens them up to real estate loans of varying duration.

“I’m flexible, in that I can offer a lot of different durations,” Otten said. Another tool in their belt is, as Haskins pointed out (with a tone that hinted at understatement), that “pricing can be pretty compelling from the life companies.”

All of which suggests—as Fitch’s new numbers point out—that lifecos aren’t quite the stodgy presence their reputations might suggest.

The landscape today “allows me to do loans that compete in the middle space between a bank and an aggressive debt fund,” Otten said. Lifecos aren’t “highly aggressive—but we’re not super conservative, either.”