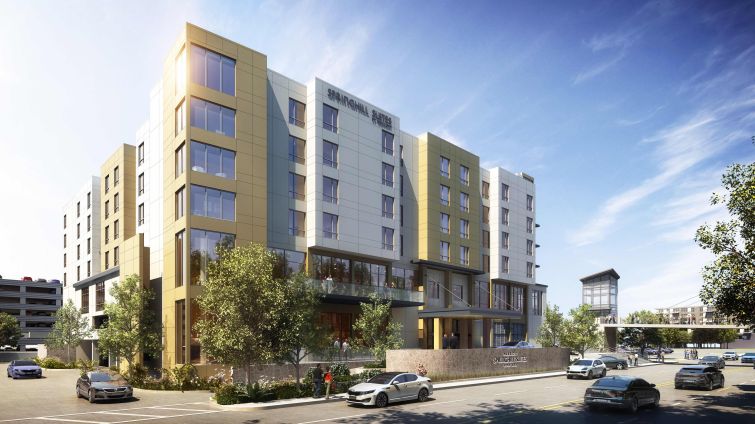 A rendering of the Springhill Suites hotel in Revere, Mass. Photo: HSF

Hall Structured Finance has handed the developer of a new Boston-area hotel a $43.3 million construction loan, the Dallas-based lender announced on Wednesday.

The deal will fund Lixi Group‘s work on a new Springhill Suites Hotel in Revere, Mass., an oceanfront town about five miles northwest of Boston. A short drive or train ride from Boston Logan International Airport, the four-story lodging should be a good fit for budget-conscious business travelers, according to Brad Ferguson, an HSF executive who worked on the deal.

“Inner Boston hotel rates can be $300 to $400 per night—and sometimes, on high-demand occasions, closer to $1,000,” Ferguson said. “This hotel is just a little outside the core Boston area, and will be a little bit cheaper. It’s also going to be located right on Revere Beach, with oceanfront views.”

Bill Carroll, the founder of 1 Financial Corporation, served as the broker who brought the deal HSF’s way. He didn’t immediately respond to an inquiry.

The four-story hotel will have 168 rooms as well as a swimming pool, a gym, a restaurant and a Starbucks cafe. As per Bldup, a website that tracks real estate projects, CR Architecture + Design drew up the plans for the building, which will abut an oceanfront boardwalk. Callahan Construction Managers will serve as the contractor.

Lixi Group keeps a low profile, as per an HSF spokeswoman, but the company runs about 20 North American hotels, the spokeswoman said. According to a hospitality-industry employment website, the developer is based in Mount Laurel, N.J., and also operates lodgings in Pittsburgh, Connecticut and Upstate New York. It already has two other Boston-area properties: a Residence Inn in Andover, Mass., and an Aloft hotel in Lexington, Mass.

HSF’s “flexible, tailored approach to financing our hotel development made this loan closure seamless, and we are looking forward to delivering this Springhill Suites to the Boston market,” Lisi Gu, a Lixi spokeswoman, said in a statement.

Strong demand and barriers to entry have carried Boston’s hotel owners to good results in recent years. In 2018, revenue per available room rose nearly four percent, according to HVS, a lodging-research firm. Demand grew more than 6 percent—a rate that supply couldn’t match because of land scarcity and regulatory obstacles, the consultancy said in a report. Expanded international air service at the Boston airport has been a special boon to hotels such as the planned Springhill geared toward travelers, the report added.

Construction should be finished in two years, according to Bldup.