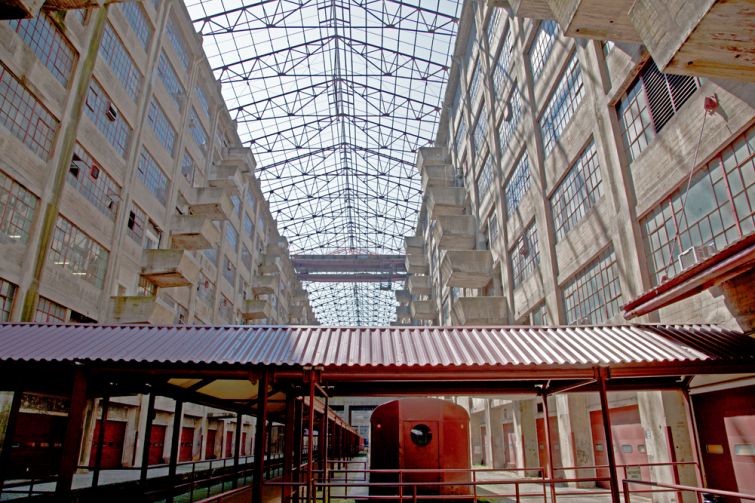 The atrium of Building B at the Brooklyn Army Terminal features an open skylight, dozens of loading docks and a disused train. Photo: New York City Economic Development Corporation

Cushman will market 238,000 square feet of newly renovated industrial space across the fourth, seventh and eighth floors of Building A, according to information from the brokerage. Each floor spans 79,340 square feet.

The city has been struggling to lease the massive development, which stretches from 58th to 63rd Streets between Second Avenue and the East River waterfront in southern Brooklyn, sources told Commercial Observer. In recent years, the EDC has handled leasing in-house at the 4-million-square-foot former army facility.

The agency has been renovating the multi-building industrial complex in stages, slowly leasing up portions of the 95-acre site that had been abandoned for the latter half of the 20th century. The BAT includes two eight-story warehouses, Building A and Building B, which are connected by a series of foot bridges, along with the eight-story Annex Building.

Much of the recent leasing at the BAT has focused on very small tenants that could fill its micro-manufacturing hub, which offers space for light industrial businesses looking to occupy less than 10,000 square feet. However, it hasn’t landed many large tenants willing to take more than 50,000 square feet.

C&W’s Joseph Cirone, Frank Liggio and Rico Murtha are handling the leasing for the vacant space in Building A, which spans 1.8 million square feet across eight stories.

“Current opportunities at the Brooklyn Army Terminal offer tenants multiple building amenities not often found within Brooklyn’s industrial building stock,” Cirone said in a statement. “[It’s] well-positioned for a wide range of businesses seeking to capitalize on nearby workforce assets and the building’s advantageous location.”

The EDC has spent $100 million renovating Building A and added a new air-conditioning system, new windows and new freight and passenger elevators.

This is not the first time the EDC has brought in outside brokers for the BAT. In 2011, it hired Greiner-Maltz and Cassidy Turley to lease up 350,000 square feet, The Real Deal reported.

“The Brooklyn Army Terminal is a premier affordable and accessible hub for modern industrial businesses and entrepreneurs in New York City,” said Matthew Kwatinetz, an executive vice president at EDC, in prepared remarks. “With a growing ecosystem of companies working in traditional and advanced manufacturing, food and fashion, and film, TV, and media production, BAT is a world-class model for innovative and inclusive economic development.”

Rumors also surfaced last week that Amazon was considering leasing a million square feet for a logistics facility next door to the BAT at Industry City. Real estate pros suggested that the e-commerce firm could be thinking about building its distribution center at the Army Terminal, which put out an RFP last year for a developer to build an urban distribution center on one of its vacant lots.