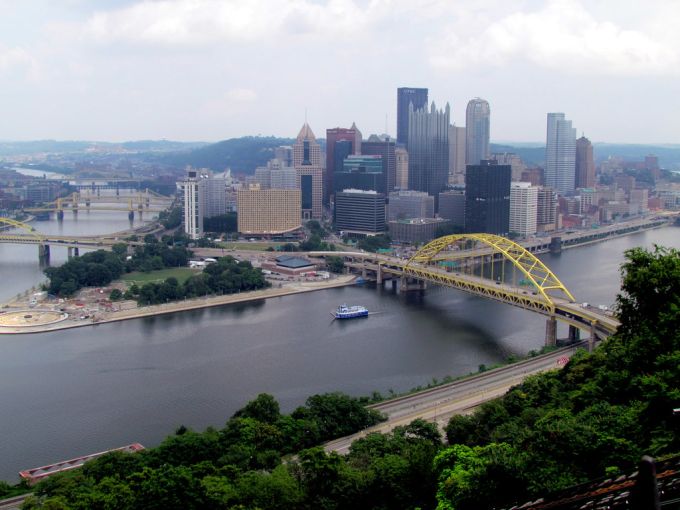 A shot of Downtown Pittsburgh, with the Parkway North submarket to the east. Photo: Wikicommons

The 10-year, interest-only loan carries a rate of 4.19 percent and refinances previous debt originated by Wells Fargo in 2017, funds reserves, covers closing costs and returns $28.7 million in equity to Faros, according to a pre sale report from Fitch Ratings. The loan closed on June 3.

Wells Fargo’s previous $127.5 million in debt from 2017 helped fund and complete the redevelopment of the asset into a sizable mixed-use office complex.

The debt is being split and securitized separately. About $71 million is being securitized in the roughly $732 million, Wells Fargo-led WFCM 2019-C51 commercial mortgage-backed securities transaction, while the remaining balance will be included in one or more future deals, according to the report.

Faros acquired the site, which included a former shopping center and two office buildings, at 100 South Commons for $68.4 million in 2015. Faros then began work that year to reposition the site into what’s now a massive 1.1-million-square-foot office and data center complex. From 2015 to 2019, it deployed roughly $56.3 million for the renovation.

Fitch has appraised the site at just over $200 million.

With the renovation, Faros modernized the concourse and outdoor plaza and upgraded the 3,000-car garage and the common areas of the office buildings. It also added a restaurant called Federal Galley and a 10,000-square-foot fitness center, Union Fitness. Fitch indicated that the cost basis of the property nears $124.7 million, including the $56.3 million spent for the redevelopment.

Built in 1966, the site is a 15-minute walk from Downtown Pittsburgh and neighbors both the Children’s Museum of Pittsburgh and the National Aviary zoo. It’s also located near Heinz Field and PNC Park, home of the National Football League’s Pittsburgh Steelers and Major League Baseball’s Pirates, respectively.

The loan’s collateral includes four buildings: The former regional mall, which has now been converted into office space called the Concourse; Tower 1, an eight-story office property; Tower 2, a 13-story office tower; and the parking garage. Just over two-thirds of the new development is reserved for office space; about 20 percent houses a data center; and just over four percent represents space for retail and amenities.

The first floor of the data center is leased by Databank and serves as the primary cellular carrier center for all of southwestern Pennsylvania for 26 service providers, Fitch wrote. IT service provider and data center operator Continental VisiNet Broadband, and subsidiary, Expedient, are housed in 73,000 square feet at the site, which serves as its headquarters.

The Concourse comprises nearly 50 percent of leasable space at the site and is home to 20 tenants. Sears and Woolworth used to have retail outposts in the building before it was redeveloped. “[The Concourse] maintains its general mall-like design in terms of the common areas occupying the former long main concourse and the office spaces occupying the former in-line tenant spaces,” Fitch said.

Alloy 26, a modern flexible office provider, currently hosts the city’s largest co-working space at the Concourse, in an old big-box occupied by Woolworth; the company has invested $3 million into the space, along with the improvements made by Faros, according to Fitch. Pittsburgh-based PNC, which has had an office presence at the site since the 1990s and has invested roughly $35 million into its space, has offices in the other big-box space formerly occupied by Sears.

Since Faros acquired the property in 2015, it’s executed on over 829,000 square feet of new leases and renewals. Over that same period, the site’s occupancy has increased from just over 58 percent to 84 percent as of last month, according to Fitch.

Overall, new office construction in Pittsburgh skyrocketed in 2018, while asking rents continued to climb in the first three months of the year, according to a first quarter Pittsburgh office market report from brokerage CBRE.

The Parkway North submarket in which Nova Place resides posted 6.8 million square feet of office inventory and a 9.2 percent vacancy rate in the first quarter, besting the city’s overall figure of 13.3 percent.

Nova Place is a case study in Pittsburgh redevelopment given how challenged investors are to find land for new projects in urban areas “due to the challenging topography of the city and surrounding area,” according to CBRE.