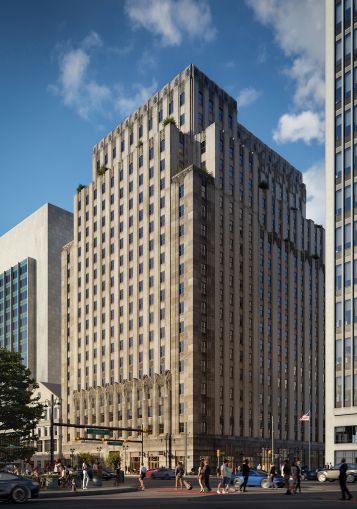 Architect Ralph Walker is having a moment.

Earlier this month, L+M Development Partners cut the ribbon at the former New Jersey Bell headquarters in Newark, New Jersey, which was designed by Walker in 1929. It’s the third Walker building to be converted to housing in the last several years.

The distinctive 20-story building at 540 Broad Street, rechristened as Walker House, has been transformed into 264 rental units, along with retail and office space.

The building has all the hallmarks of an Art Deco building designed at the height of the roaring twenties. It features a sandstone facade with ornate friezes up to the fourth floor, a lavish marble-walled lobby and telecom-themed details throughout.

New Jersey Bell called the property its home for decades until a series of mergers led to the property’s listing in 2016 by the telecom firm’s new owner, Verizon. L+M scooped it up for $16.5 million, along with several partners, and Verizon struck a deal to lease back a fourth-floor office space.

L+M was nearing the end of the redevelopment of another historic building just around the corner, Hahne’s Department Store, and was excited to work on another project that would help revitalize the area, said L+M’s Jon Cortell. But the firm was in for a surprise.

“I thought the building would be in ‘fantabulous’ shape,” Cortell said. “I thought Verizon would be a great steward of the property. What we found is that, that wasn’t necessarily the right presumption.” While some of the building’s original details had been lost to time, most of it could still be saved, he said.

“A lot of the work, [Verizon] did on top of previous work,” Cortell said. “Ceiling heights were lost to duct work, the place’s grandeur was lost to practicality.” Still, the property hadn’t been substantially changed, which meant most of the building’s original details were able to be rediscovered, he said.

“The lobby, which is pretty spectacular, was preserved from lack of interest,” he added.

CetraRuddy has built expertise in conversions of Walker-designed properties, given its work on two similar projects in New York.

Walker was one of the preeminent architects of the twentieth century, known for his dramatic Art Deco designs and his impact on Manhattan’s skyline. His career, which was at its height in the post World War I era, coincided with the rise of the skyscrapers and the modern office. His first prominent work was the design for the New York Telephone Company’s headquarters at 140 West Street in the early 1920s, in which he debuted his signature wedding-cake style building to comply with New York City’s setback laws.

CetraRuddy converted another of Walker’s iconic buildings—also a telephone exchange building—to luxury condominiums at 212 West 18th Street in Chelsea in 2013.

The firm also converted a Walker building at 425 West 50th Street into condominiums, which is now known as the Stella Tower, named after Walker’s first wife.

In addition to a floor plan design, CetraRuddy made other changes to help transform it into a residential building. They converted a parking lot behind the building, which backed up against the loading docks, into a separate entrance for residents with a porte cochere (a covered passageway). They also removed one of the elevator banks in order to add additional residential space.

Along with the exterior, which was added to the National Register of Historic Places in 2005, parts of the elaborate lobby are also landmarked, and Newark-based Zakalak Restoration Arts was charged with the restoration.

“It has so many interesting details that expressed the idea of wires and communications and electricity,” Cetra said. “It definitely had a design theme that ran through the architectural details of the building.”

The back wall features artwork of Mercury holding up a globe by a network of telephone cables, while speaking on a receiver. “It is a celebration of telecom,” Cortell said. “As if the world is held together, if not controlled by, its dependence on telecom.”

L+M worked on the project along with Prudential Financial, Goldman Sachs and Citibank, all of whom were also partners on the Hahne’s deal. The project architect was Inglese Engineering & Architecture, and the design architect was CetraRuddy.