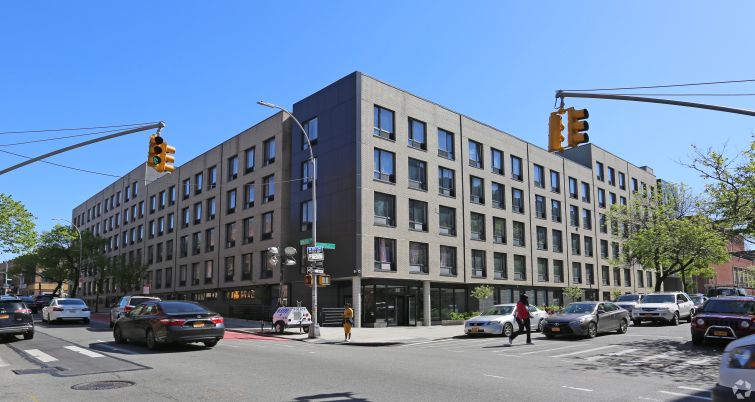 Merchants Capital has provided $51 million in Freddie Mac-backed debt to a joint venture between Brooklyn-based Heights Real Estate Advisors and human services organization Samaritan Daytop Village for a transitional and affordable housing development in Crown Heights, Brooklyn, according to information provided by the lender.

The proceeds were provided through Freddie Mac’s affordable housing capital markets execution loan program, which launched in 2011. The debt is backed by 267 Rogers, a 165-unit project at the corner of Rogers Avenue and Crown Street.

“[This deal allows us to be] creative and innovative in solving problems and seeking new financial strategies and structures to solve those problems while serving an immediate need right here in our community,” Merchants Capital Executive Vice President Mathew Wambua said in prepared remarks.

Built in June 2017, the five-story development comprises 157,285 square feet, according to data from CoStar Group. It was originally designed by Think! Architecture and Design.

The borrowers have partnered with the Department of Homeless Services to dedicate 80 percent of the building’s units to transitional housing for homeless families; the remaining 20 percent are reserved for families that earn up to 60 percent of the area’s median income which, within a one-mile radius, sits at just over $54,000, according to CoStar data.

Samaritan Daytop Village will facilitate a suite of services at the location available to all residents, including employment and job readiness services, daily living workshops and personal financial management as well as education and child care assistance programs.

“It is a priority for us to contribute and be responsive to the communities we work within,” Heights principal and founder Rachel Foster said in a prepared statement. “We look forward to continuing to work alongside the city and those in the private and nonprofit sector to bring new solutions to the housing crisis.”

The project at 267 Rogers has proved controversial. Residents in the area filed suit against the shelter in 2017, eventually achieving a temporary restraining order halting its full opening, despite the fact that families had already started moving into the building. The plaintiff in the case—the Crown Heights block association president—instead argued for the development to be completely designated as affordable housing.

In 2017, Mayor Bill de Blasio launched “Turning the Tide on Homelessness,” a five-year plan that aims to close all privately run shelters in the city and replace them with 90 new shelters, with a pledge to decrease the nightly shelter census by 2,500 people by 2022. The development 267 Rogers is a stepping stone on the way to achieving these goals.

But, the De Blasio administration has come under fire from city officials over the last few months for not taking a strong enough stance to combat the city’s homeless problem.

An April report from the Coalition for the Homeless showed that the number of people staying in nightly shelters increased to 63,839, a record high, and that the shelter census is on track to increase by 5,000 people by 2022. The organization stated that the city would have to develop 24,000 new units and preserve around 6,000 additional units in order to stave off the projected increase in the homeless population.

Another official at Heights Real Estate Advisors did not immediately respond to an inquiry.