London dorm developer launches what it hopes is the next student housing trend in the U.S.—though it looks a little familiar 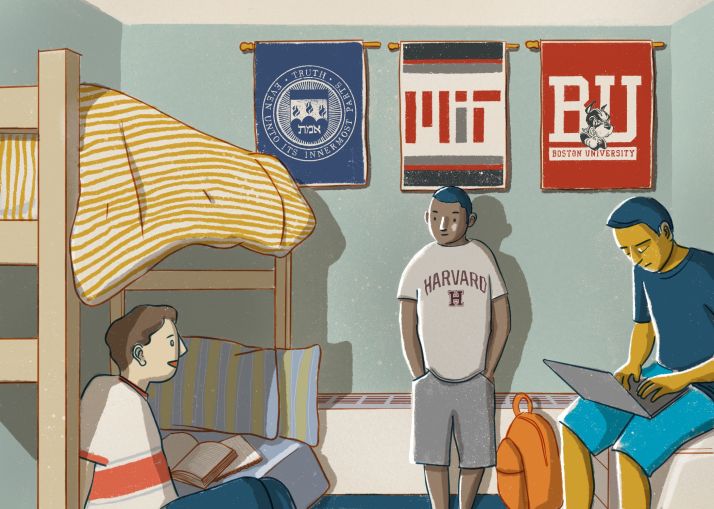 London-based Scape is trying to bring its concept of mult-school dorms to America. Illustration: Matthew Baek

In October 2018, London-based developer and landlord Scape announced the establishment of a U.S. headquarters in Boston. The move was part of the firm’s plan to spend more than $1 billion in New England’s largest city developing private, independent dormitories for graduate and undergraduate students.

It is a plan that’s unique to the United States. Because, unlike other private dorms that dot campuses across the U.S., Scape’s dorms would be independent and unaffiliated with a university or a college. In a sense, they would be like co-living facilities, but specifically for students only.

So far, Scape is the only development company with plans for such dorms in the U.S., though at least one co-living provider might open something similar in Los Angeles.

If these moves prove successful, independent, unaffiliated dormitories could prove a new development trend—just in time for those in the nation’s more expensive cities with tighter multifamily inventories that nevertheless continue to draw young people for education, many of whom stick around after graduation and add to the competition for existing housing.

Scape seems to understand this and is therefore setting itself up as a kind of dorm disruptor. It has plans for up to 20,000 beds nationwide, in cities like New York and San Francisco with sizable student populations, starting with its first ones in Boston. And it has couched this initial U.S. foray in terms of weaving its dorms into a city’s built fabric.

“The need for affordable graduate academic housing is acute and overlooked,” Scape USA chief executive Andrew Flynn said in a statement announcing the Boston plans. “We seek to deliver purpose-built environments to serve those driving the city’s research and innovation.”

Scape would also be filling a gap that colleges and universities themselves perhaps can’t fill due to high land and construction costs. San Francisco had the world’s highest construction costs at the end of 2018, with an average of $416 a square foot, according to consultancy Turner & Townsend. New York’s averaged $368 a foot. In Boston, costs are about half, but developable sites are scarce beyond campuses, leading colleges to build on their own footprints, if they do at all.

Plus, construction costs in major U.S. cities rose 5.7 percent in 2018 compared with the year before, according to another report from consultancy Rider Levatt Bucknall.  Schools can’t get the kind of return on dorms on non-campus properties that private developers might in markets such as these, analysts say.

And, as Commercial Observer reported in April, a higher share of private colleges nationwide, including in cities such as Boston, are struggling to even stay open. A Moody’s Investors Service survey released in July 2018 found that around 11 private colleges are closing annually, up from around five as recently as 2014.

Dwindling enrollments usually precede these closures. The dwindling enrollments, too, can reverberate into local housing markets as fewer students lessens the demand for existing housing and disincentivizes colleges from constructing more.

In this framework Scape will be competing with dorms as well as private apartments, capitalizing on this lack of student housing—especially for graduate students.

Scape declined requests for comment for this article. But the firm detailed its Boston plans in spring 2019 filings with the city. The initial U.S. project would go up in Boston’s Fenway neighborhood, which the eponymous Major League Baseball arena dominates.

The 15-story, 235,095-square-foot tower would include 533 units that Scape describes as “private academic accommodations for students.” Some of the units may have more than one bed, according to a Scape spokeswoman.

It would essentially be situated between two of the largest private universities in the U.S.—Boston University and Northeastern—and nearby several smaller colleges, including Simmons and Wheelock, and of course, Harvard Medical School.

Scape plans to use certain features, too, to aim the development squarely at undergrads and graduate students. Those include operating it 24/7 with a full-time, on-site staff. Plus, the units will be barebones—sleeping space, kitchen, bathroom and desk space—while communal spaces will be plusher.

Those will include landscaped outdoor areas and indoor lounges stocked with foodstuffs. These communal spaces are designed to make up for the compactness of the rooms—which, not accidentally, mimic the dorms many students might encounter on campus. The project is also slated to include ground-floor retail space as well as a 120-seat theater focused on LGBTQ works.

It is unclear if Scape’s Boston property would operate like a conventional dorm. But its overseas ones do not enforce curfews—they do have “quiet hours” overnight—and couples can live together provided each half is a student.

“The only ways these buildings really work is if they’re highly efficient [and] meet the needs of the end user,” Flynn said in an October interview with National Real Estate Investor, around the time of the Boston announcement.

Scape declined to disclose possible rents for the dorms. But its offerings in the United Kingdom, Ireland and Australia—where it currently operates or is developing more than 12,500 units total—provide clues. In London, furnished, utility-ready “standard studios” are renting for about $300 a month. A bed in a three- to six-bedroom shared unit is renting for $250 a month.

These and other units at certain overseas Scape locations have waiting lists, suggesting demand for the spaces is high.

Barry Bluestone has been analyzing the Boston housing market for decades and is now professor emeritus of public policy at Northeastern University.

He said he sees unaffiliated, independent dorms such as the one Scape wants in Fenway as “a glimmer of hope” in solving the Boston area’s housing shortage—and one that would be transferrable to other housing-starved cities with hefty student populations such as New York, Chicago and San Francisco.

The Boston region itself added 245,000 jobs from 2010 to 2017, according to a study released in June by the Massachusetts Smart Growth Alliance and six other groups. But altogether, the regions’ municipalities permitted only 71,600 housing units during the same period. And much of that new housing is at two extremes.

“The cost of building housing in the past has been so great that no one has attempted to build it for people who are either not super-rich—we know how to build for that—or they’re very poor, and there are subsidies for that,” Bluestone said. “Everyone in between is competing for what’s left.”

Many Boston universities do not provide on-campus housing options for graduate students and their families, so Bluestone said it becomes clearer why Scape and other would-be independent, unaffiliated dorm developers might have an opening.

“Northeastern has 6,100 graduate students,” he said of his former employer, “and it houses none of them on campus.”

For its part, Scape is looking “at large urban centers up and down the East Coast and the West Coast,” Flynn, its chief executive, said in that October interview. In the past, too, Scape has described its approach as centering on demand in in-demand places.

The City of Boston itself has said that it wants 16,000 new undergraduate beds and 3,000 graduate-student ones by 2030 as part of a larger housing development plan.

“Our model is certainly focused on urban infill markets,” Flynn said, “where we can be complimentary to the great universities that already exist and thrive in those markets, where there’s really a housing shortage.”

Like with Scape dorms, co-living units come furnished, with sparer private living spaces and more commodious communal areas. Utilities—and even activities such as group trips and cooking classes—are included in the costs. Plus, the lease lengths for both Scape dorms and co-living units are generally more flexible than for conventional apartments.

Co-living firms have been expanding rapidly in the United States since the start of 2018. As Commercial Observer reported in April, entities such as Medici Living Group’s Quarters, Property Markets Group’s X Social Communities, the Collective, WeWork’s WeLive, and Ollie have all announced or executed expansions and new investments.

Some, like Scape, have roots beyond the U.S., too, including Quarters, which grew out of projects in Germany, and the Collective, which is based in London. (Most of the other most rapidly expanding co-living firms are based in New York.)

Finally, these co-living firms have aimed their expansions at cities that are not only dense with younger residents but the ones that are more expensive.

Quarters co-founder and chief executive Gunther Schmidt told CO that his company’s units cost tenants 10 to 20 percent less than comparable sized studios “in a time when real estate prices are rising in all the major cities around the globe.”

So, will co-living companies follow Scape into independent, unaffiliated dormitory development? None of the major co-living firms that are expanding have plans for such development, though one currently says many of its co-living tenants come via collegians anyway.

A spokeswoman for Quarters said that Medici Living, the apartment-sharing wing of Quarters’ corporate parent Medici Group, “offers shared flats at low costs to all,” but that those are not necessarily targeted toward students, even if many such tenants are in school.

As for that first U.S. beachhead, Scape is looking at a 22-month construction schedule if the City of Boston signs off on it this year. That would mean a 2021 opening. There is some neighborhood opposition, however, to the scope of the project and the prospect of living among more undergrads. Larger-scale development in the Massachusetts capital can take years due to such disputes.

If Scape is able to build and to lease at a pace similar to what it’s seen overseas, the company’s example could serve as a template for other independent, unaffiliated dorm developers in the U.S.

UPDATE: This story has been updated since publication to list the number of stories in Scape’s planned Boston building.