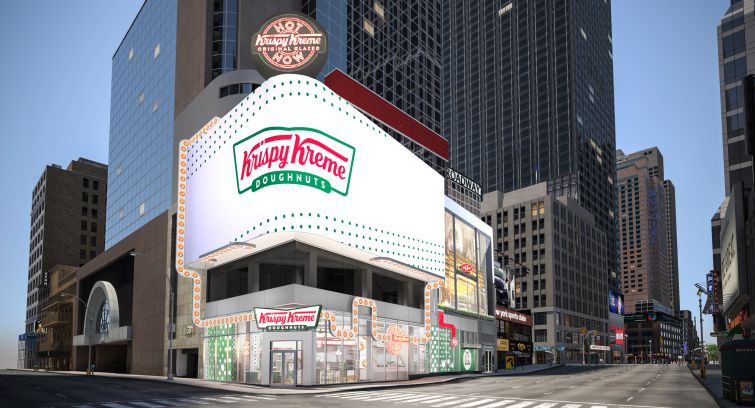 Doughnut chain Krispy Kreme will open a 24-hour Times Square outpost with a “doughnut theater” and “glaze waterfall,” the retailer announced this week.

Spokespeople for Krispy Kreme and Vornado did not respond to a request for comment on the terms of the deal. It was not clear who brokered the lease.

The Krispy Kreme Times Square flagship is set to have a giant “Hot Light” neon sign at the top of the storefront along with a walk-up window outside, a spot to watch the doughnut making process and a Krispy Kreme doughnut box with stadium-style seating, Krispy Kreme said in a release.

“In the most iconic city in the world, the Krispy Kreme Times Square flagship will showcase our brand on the global stage and inspire customer wonder,” Michael Tattersfield, the CEO and president of Krispy Kreme, said in a statement.

The Times Square outpost—at the bottom of the Crowne Plaza Hotel—will take over part of the retail space formerly occupied by Hershey’s Chocolate World, which left for bigger digs nearby at 701 Seventh Avenue in 2017, DNAinfo reported. It will be the chain’s second outpost in the city when it opens early next year, joining Krispy Kreme’s Penn Station location.