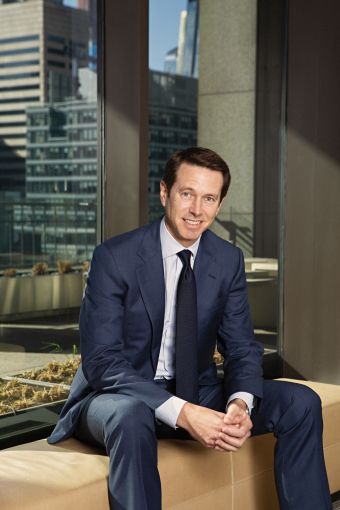 In an alternate universe, CBRE’s Paul Amrich might never have made it to New York City after college but instead went to Canada to try to make it as a pro-golfer.

The Mobile, Ala.-native had about a month left of school at Campbell University in North Carolina when he was playing with some teammates who were gearing up to go on the PGA development tour. He beat them all by three strokes and afterward they tried to convince him to go up north to join them.

“In hindsight, I’m really glad that I didn’t,” said Amrich, 46. “Those guys lived out of the trunk of their cars and they’re not playing professional golf.”

Instead, Amrich moved to New York City where he landed a gig at Cushman & Wakefield and later jumped ship to CBRE. He’s been there for 13 years and eventually grew to become one of the most prolific commercial brokers in the city.

“I like the sales and the entrepreneurial side and the energy in New York, he said. “I don’t think I could have been easily swayed to go the other way.”

It clearly suited him. Amrich was one of the youngest people, at 39, to be named vice chairman at CBRE in 2012 and was the number one producer in CBRE’s Tri-State region last year.

In 2018, he leased about 2.3 million square feet of office space and closed 136 deals. These include representing Trinity Hudson Holdings in Google’s 180,000-square-foot lease at 345 Hudson Street in December 2018, Netflix’s 100,000-square-foot deal at 888 Broadway in April for Normandy Real Estate Partners and Twitter’s 215,000-square-foot renewal in November 2018 at 249 West 17th Street which he brokered for Columbia Property Trust.

“I’ve never said ‘I want to be [number one],’ I’ve just said I want to keep my head down and keep doing great work for our clients and continue to grow my mind and my knowledge base,” Amrich told Commercial Observer.

Clients who work with Amrich commend his Southern charm, cool demeanor and describe him as a “smart, creative, smooth, trustworthy and credible” broker.

“Good brokers have a couple of those characteristics; it’s very rare to find a broker that has all of them,” said David Welsh, a co-founder and a partner at Normandy. “He’s got a Southern-poised style in New York City, where that’s not a typical characteristic.”

Hines’ senior managing director Tommy Craig, the operating partner at 345 Hudson Street, tapped Amrich and his team to handle leasing on the property because of Amrich’s ability to play his cards close to the vest.

“What’s really appealing, even beguiling, about Paul is that he has the loudest voice in the room because he speaks so selectively and quietly,” Craig said. “He really is thoughtful about not overstating any position or saying more than is necessary.”

Amrich’s work on the Google assignment resonated with Craig’s only son—who was interning at Normandy at the time—and made him want to look to Amrich as a mentor.

“The person he singled out as the one he felt he could learn the most from, and in a very natural way looked up to, was Paul,” Craig said. “[Amrich’s] edge is soft, not hard, but no less effective. I think that is part of what my son looks up to.”

Amrich credited his own mentors throughout his nearly 23-year career and said he learned early on to keep his ears open during negotiations and remain grounded even after success.

“I’ve always been balanced to listen a lot, take a lot of notes and take every good situation and learn from it, sometimes bad situations too,” Amrich said. “I’ve tried to be somewhat humble and thoughtful about how my career has grown and, I’ll call it, ‘keep it in check’ in a bit of a wild business.”

“Keep it in check” isn’t the only saying Amrich doled out in talking about the real estate business. Others include: “Don’t think of the dollar, think of what you need to do to make a deal”; “If things are going well, don’t get out of your lane” and “It’s all about the long haul.”

These are the kind of gems Amrich now drops to younger brokers stepping through the doors or joining his seven-person team as he serves as a mentor, something he finds great joy in.

“It’s fun. It’s rewarding that you’re helping formulate somebody else’s career, helping guide them in an environment or in a world that can be challenging for a young person,” Amrich said. “It’s fun to talk to people about how you get into this business and how you can actually make it work. It’s not a really hard business. It’s just a time commitment and having the right tools and being smart, thoughtful and being a really good listener.”

While being a broker wasn’t always Amrich’s dream job, he’s been around the real estate world for most of his life. His family left Alabama when he was 15 and settled in Wayne, N.J. His father was a civil engineer and contractor, and Amrich spent his high school and college years helping at job sites around Manhattan.

“I can walk a site today with my team and be able to understand why somebody’s spackling a wall or taping a wall or sweeping a bunch of green dust on the floor and they don’t know what it is,” he said. “I know what that product is because I actually swept it in college.”

Amrich went to college on a golf scholarship and graduated with a bachelor’s in business administration with a marketing management minor. While in college, he got an internship at a small real estate company that no longer exists, Gibraltar Enterprise, which gave him the brokerage bug.

“The building side I can relate to, and it’s tangible, and the sales side kind of motivates me,” he said. “So, coupling the two probably helped formulate where my head is and where I’ve been able to grow my mind and my business.”

Even as a junior broker at C&W, clients singled out his work ethic and potential. When Normandy picked up its first asset at 1370 Avenue of the Americas in 2002, Amrich was part of the C&W team hired by the previous owner to fill the building. During the due diligence process, Welsh quickly noticed Amrich was carrying the bulk of the weight for the leasing team and tried to push his partners to hire Amrich as the sole agent for the building.

“I realized Paul was the guy doing all the work and was giving the majority of the fees to the senior guys,” he said. “I didn’t want him to be giving everything away to people who weren’t doing the work.”

However, another one of Welsh’s investors was involved with a different brokerage—which he declined to name—who got the assignment instead. The vacant building languished for more than a year before Welsh got his partners to agree to tap Amrich instead. The building quickly leased up.

“That was our first deal and Paul was instrumental in helping that deal to be a success,” he said. “Since then I’ve always looked at Paul as our go-to broker.”

Which is why Normandy tapped Amrich to lead leasing efforts at former ABC Carpet & Home’s headquarters at 888 Broadway, which Normandy bought for about $130 million in 2017. It’s Amrich’s skill for helping developers reposition an asset that made him the perfect choice, said Normandy partner Paul Teti.

“Paul’s able to really think like a developer but with a real focus on how to attract the best tenancy into the building,” Teti said. “For developers, the best agents are able to put themselves in your position and recognize that every dollar you spend is significant and needs to be connected to leasing success.”

When Normandy was trying to figure out where to put the new lobby, since it was changing from a retail asset to an office, Teti said that Amrich did a lot of research to present the developer with the best spot.

“Paul didn’t just make an off-the-cuff suggestion, he really went back into the archives and studied historic photos of the building,” Teti said. “Ultimately, we made a decision that I think influenced the success of the leasing campaign there.”

When marketing the site to the tenants, Amrich leaned on the nearly 140-year-old Flatiron building’s history and craftsmanship, eventually inking deals with streaming giant Netflix and Australian software company Atlassian.

“Those two tenants chose that location because it’s very central, but more so because the bones of the building were so unique,” Amrich said. “Where do you find 14- to 18-foot ceiling heights, with huge oak framed windows and oak floors and ornate steel columns? Facts [like] that are hard to find in New York.”

The former ABC Carpet & Home building isn’t the only spot Amrich has been helping to revamp in recent years. Oxford Properties Group and the Canada Pension Plan hired him to lead the leasing of the 1.3-million-square-foot St. John’s Terminal site that they’re redeveloping at 550 Washington Street.

“I’ve been associated with that property for the better part of 12 years, so I’ve seen it go through a bunch of different economic runs and finally get to a place where it’s been put in a really thoughtful developer’s hand,” he said.

Another property Amrich is helping to redevelop could be seen from CBRE’s Midtown offices. Milstein Properties hired Amrich to lease out the 1980s 29-story tower at 335 Madison Avenue, which the developer is transforming into a vertical tech campus.

And while plenty of “glass and steel” modern buildings are springing up around Manhattan—and a few of them count for the more than 24 million square feet Amrich currently represents—he said helping bring a historic building into modern office space while not losing sight of its past “gets your blood flowing.”

“There’s a set of industries that love [modern architecture], but then there’s also a big set of industries that embrace the strength of history and the bones, and ceiling heights and loft-like effects,” he said. “But you restore those bones and then you implement all the modern qualities of what those buildings should possess today.”

Despite the passion Amrich still has for the real estate industry after more than two decades, he still makes sure to carve out time to spend time with his family. He gets back home to Greenwich, Conn., four nights a week to eat dinner with his wife, 6-year-old son and 3-year-old daughter (though he makes up for it by waking up at 5 a.m. and getting to the office early).

He still finds time to play golf with clients (with Welsh praising Amrich’s golf skills) and lately started teaching the game to his son.

“I think it establishes a lot of qualities as a person that I was blessed to learn at six or seven years old and carry it through to myself,” he said.