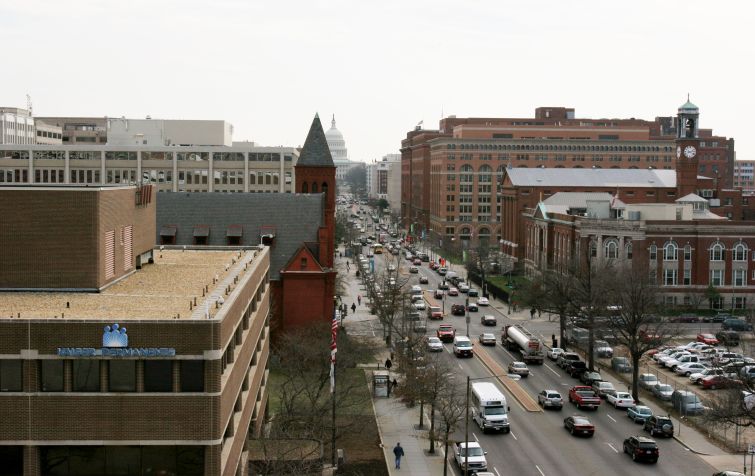 A view from a rooftop on North Capitol Street NE in DC. Photo: Getty Images

Arlington, Va.-based Network Realty Partners has agreed to purchase two properties and a piece of land in Washington, D.C. for $181 million, according to the seller CIM Commercial Trust Corporation. The assets comprise the Union Square office complex in D.C.’s NoMa neighborhood.

Network Realty signed a purchase and sale agreement for three addresses – 899, 901, and 999 – on North Capitol Street NE, according to a SEC filing document. CIM expects the deal to close in the third quarter, according to a spokeswoman for the firm, who declined to provide further details on the deal.

The 899 and 999 North Capital sites each house a nine-story office with a combined 609,540 square feet of space, a majority of which is leased to the D.C. government, according to CIM’s website. The 999 North Capitol property received upgrades in 2011 to the main lobby, corridors, restrooms, elevator and building systems.

The 901 North Capital site is comprised of land. Before the sale, Washington D.C.-based Akridge agreed to develop a 12-story, 250,000-square-foot office building on the site on behalf of CIM, according to Akridge’s website. The property will be Union Square’s final office building.

Network Realty and Akridge did not respond to Commercial Observer’s requests for comment.