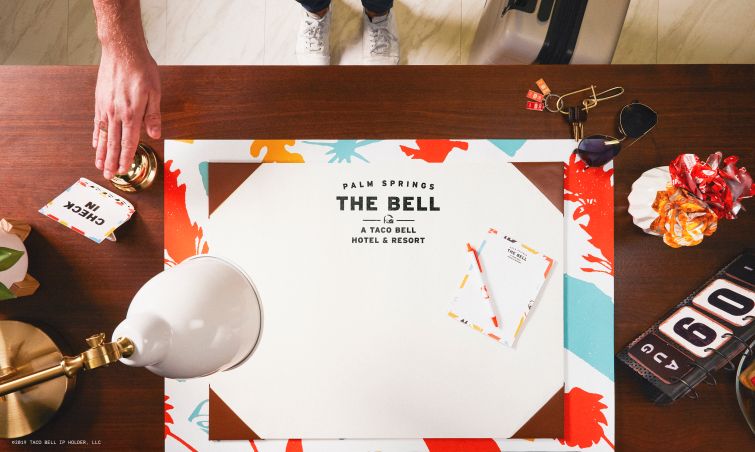 Taco Bell has joined the pop-up craze and will open a limited run hotel in Palm Springs this August. The Bell: A Taco Bell Hotel and Resort will offer fans of the bell, aged 18 and up, a promised “tacoasis,” according to a company release. Marisa Thalberg, chief global brand officer, called the hotel “the biggest expression of the Taco Bell lifestyle to date.”

Details, however, are scarce on what exactly the hotel will look like, how much a stay will cost, or where exactly in Palm Springs it’ll be. (A call to Taco Bell for more info was unreturned as of press time.) But reservations at the pop-up which will run from August 9 through August 13, will start in June and those eager to book can sign up for updates online.

From self-proclaimed “Bell” hops the immersive pop-up “inspired by tacos” and “fueled by fans, the pop-up will include room service offering a menu of favorite restaurant items and poolside cocktails with a “Taco Bell twist.” (Extra-spicy Bloody Mary’s perhaps?) The resort will include an on-site salon offering Taco Bell-inspired nail art, fades and a braid bar for uber fans to perfect their looks before perhaps lounging in the pool on a first-sauce or sauce packet-shaped floatie. (As if a stay in the palm desert in August wasn’t hot enough.) There will also be a gift shop full of branded merchandise including a resort collection, per the release, that will be made available online later this summer.

Even if you don’t score a room, a spokesperson for Taco Bell told Conde Nast Traveler, the concept may pop up elsewhere in the future.

Though novel, this isn’t Taco Bell’s first foray into experiential retail. You can get married in the Taco Bell Cantina in Las Vegas, which is open 24 hours a day, seven days a week. And, if you’re lucky, perhaps honeymoon in Palm Springs at The Bell resort come August.