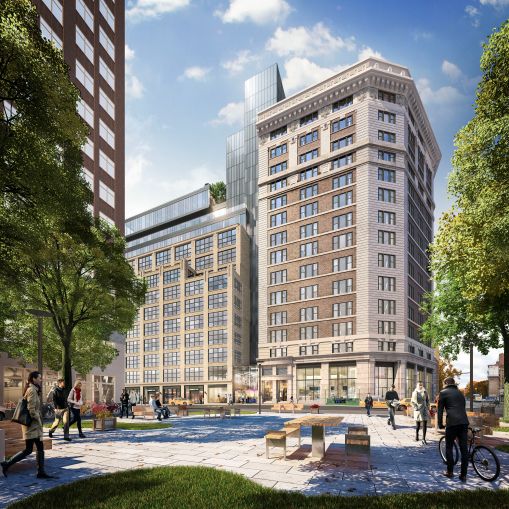 Stellar Management and Imperium Capital have sealed a $900 million refinance of One Soho Square, officials at Stellar told Commercial Observer. The deal closed on May 23.

“Goldman was a good fit because they were already one of the lenders on the asset and we knew they had the best economics,” Ryan Jackson, a principal of Stellar Management, told CO. “Their reputation gave us assurance of their certainty to close in our desired timeframe.”

CMBS offered the best execution for a deal of this size, Jackson said. And, with the debt markets hot to trot, “it’s a very good time to be a borrower.”

The building is roughly 92 percent leased to a roster of tenants that includes MAC, Glossier, Warby Parker, Aveda and Trader Joe’s. In October, CVS inked a 13,266-square-foot deal to open a new location in One Soho Square’s base.

The robust leasing activity played into the refinance’s timing. “[It] did play a role as we only have one floor left to lease,” Jackson said.

“As evidenced by the forward-thinking and name brand companies that have offices here, One Soho Square continues to set the standard for office space in Manhattan’s most desirable submarket,” Adam Roman, Stellar Management’s chief operating officer, added in prepared remarks. “Our team has done a terrific job molding these buildings into something really special that appeals to companies looking for one-of-kind space that their employees will love.”

Jackson said that “to an extent,” the landlord’s vision has since been realized for One Soho Square.

“We’re always striving to improve and provide our office users a leading-edge experience every day they come to work,” he said. “The property will always be where it is, but we need to make sure it always gets to where tenants want to go.”

“Both the domestic and international capital markets were eager to participate in such a bespoke offering as One SoHo Square,” Hernandez said. “The quality of the property, amenities, tenancy and location make it a truly one of a kind financing opportunity.”

While Jackson offered no tidbits regarding upcoming financings, “getting large marquee transactions like this one done is going to be a continued theme for 2019,” he said. “As mentioned earlier, it’s a good time to be a borrower.”

This story was updated to include the fact that Paramount Group provided a mezzanine loan in the deal’s capital stack.