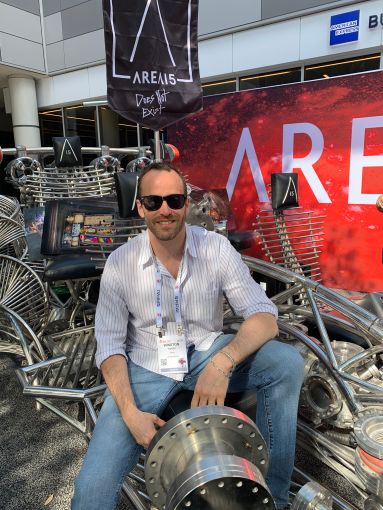 Those wandering around the entrance to the Las Vegas Convention Center for the International Council of Shopping Center’s annual RECon might have spotted an enormous silver vehicle parked outside the north entrance that looks, in the words of Winston Fisher, like something created by “Mad Max…if he had a tank and a lot of money.”

It’s called “Mister Fusion.” It was designed by Las Vegas artist Henry Chang. And it was the eye candy to introduce AREA15—the artsy, futuristic retail concept being unveiled by the Fisher Brothers in Las Vegas—to the conference.

“That’s not the car we’re going to have,” Fisher said of Mister Fusion, “’cause that’s the small one. We’re going to get the 34-foot car.”

But far-out Road Warrior-esque dune buggies seem to fit in with the out-of-the-box concept for AREA15 —which is, in Fisher’s words, “purpose-built for the experience economy.”

Commercial Observer: What does that mean?

Winston Fisher: What we’re building is a content box. You come in, it’s free to enter. To your right and left are our retail tenants. Our retail tenants are immersive, experiential, entertainment or boutique and novel—and food and beverage. Meow Wolf [the arts and entertainment company] is our anchor tenant with 50,000 square feet out of Santa Fe. Nomadic, a [virtual reality] company [signed a lease]; I can’t say the name but we have a 10,000-square-foot lease out with a barcade concept. We’re about to finalize with an immersive theater company; we’re talking to three breweries. We’re event space. We can handle 100 to 5,000 people. We have 32,000 square feet of outdoor even space. And then, the whole spine [of the project]—the main hallway—is all event space. We could have a food competition, we could have drone racing, we could have music. We’re going to have great music—our head of events came from Live Nation.

What were some of the movie influences?

I try to stay away from that. We’re not a themed experience. What we are is a place of innovation. We’re going to have things like 30-foot flames shooting off the roof that people can control; using tech to turn the whole place into a jukebox with smoke and lasers. I’m talking about having a button that can shoot confetti. The idea is that it’s a place of wonder. The spine is where we’re going to have our center bar where we’re going to have our gift shop, our candy store, something we’re calling the Bizarre Bazaar which is run by a woman who comes out of the festival world with local jewelry and clothing. Authentic real stuff. An 18-foot tall Japanese weeping willow, digitally-built.

It’s not a real tree. It’s an electronic tree. It’s not lasers—it’s physical pieces that have lights.

Tell me about the Skull.

Josh Harker and Bar Kressa built the Skull, and Bar is a projection genius. They made this art project that came to Burning Man. And it’s this incredible skull—we call it our Bellagio fountain—it’s got all these images. It shivers. It looks like the universe coming down. And that’s going to be the first thing you see when you walk in the building. It’s 16 feet tall. It’s got presence. Go big or go home.

How did you go about finding all these different artists?

Michael Beneville, the co-creator, is another creative genius. He is an experienced designer. He had wonderful contacts in this space. When we tell the story to artists, we tell them we want to help them make money. We want the artist to be successful and we want to celebrate their work.

Was this the kind of thing that had to be done in a place like Vegas, or do you think it can be transported out?