Owner Xinyuan Real Estate is planning to develop a sizable mixed-use condominium development in place of the shuttered historic theater. 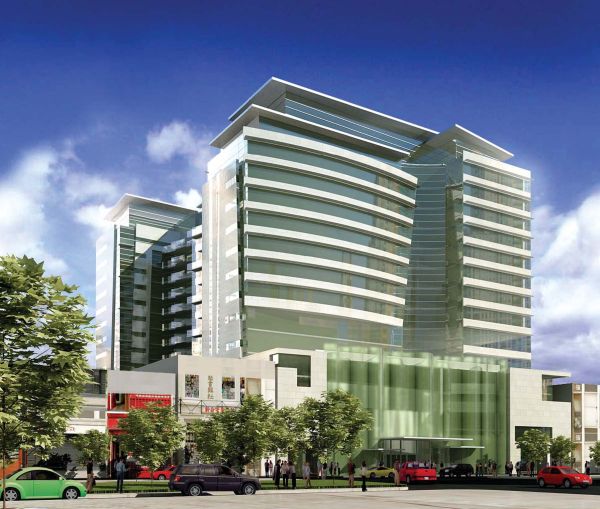 A rendering of the planned development at 135-35 Northern Boulevard. Photo: CoStar Group

Madison Realty Capital has provided $30 million in pre-development financing to Xinyuan Real Estate for the redevelopment and restoration of the vacant former RKO Keith Theater in Flushing, Queens, Commercial Observer can exclusively report.

The two-year non-recourse and interest-only first mortgage loan allowed Xinyuan to cash out equity prior to moving forward with the development.

Xinyuan is planning a 17-story, 269-unit and roughly 350,000-square-foot mixed-use condominium and retail development where the theater sits at 135-35 Northern Boulevard in Downtown Flushing.

“This well-capitalized sponsor has done a fantastic job assembling and planning this shovel-ready site, and the deal was particularly attractive at a less than $100 per square foot loan basis and less than 50 percent of cost,” Josh Zegen, Co-Founder and Managing Principal of Madison Realty Capital [MRC], said in a prepared statement. “[MRC is]…confident this will be a standout property in the Flushing submarket, which is growing rapidly and stands to benefit from a very healthy development pipeline.”

The transaction was arranged by Marcus & Millichap’s Gary Sefcik on behalf of the borrower, with assistance from Rick Lechtman and Dan Lisser, out of the firm’s New York outpost.

“[MRC] is dynamic and executes more easily than many bankers,” Sefcik told CO. “They can close quickly, and did so within 30 days. Xinyuan wanted to get cash quickly…they’re looking to optimize the business plan and are working on drawings for the project’s [pre-development]. They’re using the money to demolish the site and take it through the pre-development process.”

Xinyuan is expecting to complete the property’s demolition by February 2020, according to information from MRC. In addition to the roughly 210,000 square feet spread across the 269 condo residences, the new development will feature 17,000 square feet of retail on the first and second floors, a 15,000-square-foot space reserved for a community facility and also 305 parking spaces.

A source with knowledge of the process told CO that future construction debt needed for the property could be in the realm of $180 million, with the cost of the project “ball parked” between $225 million and $250 million.

The theater opened on Christmas Day in 1928 and has hosted many notable names such as Bob Hope, Jerry Lewis and Judy Garland. It maintained full New York City landmark status until the 1980s, when only the grand foyer, lobby and ticket booth still held the title. It was listed on the National Register of Historic Places in 1982 and closed in 1986.

The redevelopment of the former theater had run into walls for decades, facing issues over the complexities regarding its landmark status, specifically the portions of the building’s interior—the lobby facing Northern Boulevard—which Xinyuan will indeed preserve. Xinyuan obtained the necessary approvals from the Landmarks Preservation Commission in 2017.

Xinyuan acquired the property for $66 million in 2016, records show, and is redeveloping the asset without a joint venture partner, something Sefcik said is unique with a Chinese developer. Xinyuan has brought in local New York expertise to help in the approvals and construction processes. Chinese firm Kuafu Properties will be the third-party project manager.

“Many Chinese developers don’t have the local expertise, so [establishing a joint venture] with veteran New York developers is common, providing LP [limited partner] capital, but Xinjuan is rare because they’re not partnering with anyone; they’ll tackle this all on their own,” Sefcik said. “They’ve hired local New York vets and construction people [to advise throughout the process]. You don’t typically see that with Chinese firms.”

While the campaign to transform the building into a retail and condominium project has been approved, Sefcik said Xinyuan has left the door open to evolve or improve the business plan in order to meet the demands of the surrounding market.

One possibility is the addition of a hospitality portion to help serve travelers coming from LaGuardia Airport, Sefcik said.

“You’re getting the best of both worlds [with this development],” Sefcik said. “You preserve the interior and you get to build to the size you need to pull it off and be successful in Flushing. It’s in a prime retail corridor and it’s a buyers market there, so there’s strong demand.”

A representative for Xinyuan did not immediately respond to a request for comment.

This story was updated to include a quote from Josh Zegen of Madison Realty Capital.