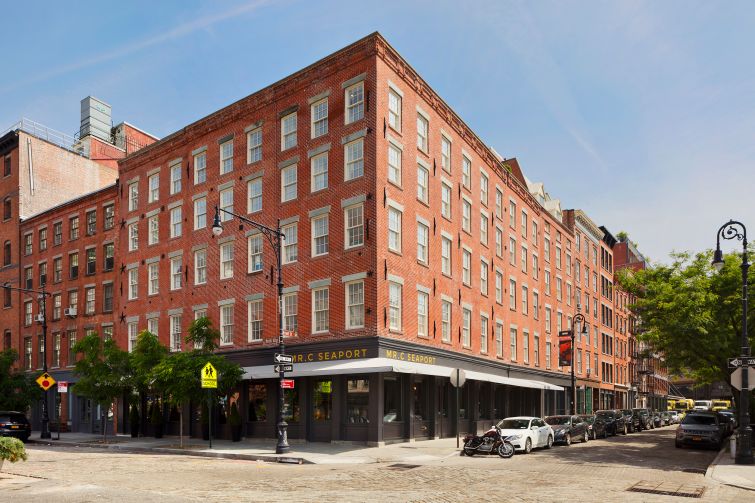 A lower Manhattan hotel has picked up a $41 million refinancing from Arbor Realty Trust, $31 million of which will be part of a new collateralized loan obligation deal, according to data that’s been published about the transaction.

The deal extends short-term leverage to Mr. C Seaport Hotel, a lodging that opened last September and that is majority owned by affiliates of Los Angeles-based Atlantic Pearl Investments and run by the Cipriani restaurant family. The 66-room property stands at 33 Peck Slip between Water and Front Streets, just south of the Brooklyn Bridge. Portions of the financing may remain separate from the CLO, and as a result, the transaction’s full value was not immediately apparent.

The loan closed on May 10, according to Trepp, and will carry a three-year term that’s extendable to 42 months. The hotel’s owners will pay interest 3.15 percentage points above the one-month LIBOR rate on the securitized portion of the debt, as per Trepp.

“The hotel’s been very well received by the community, both locals and tourists,” said Bob Ghassemieh, an Atlantic Pearl executive. “We’re excited about the Seaport District being fully redeveloped as new venues open,” he added, referring to Howard Hughes Corporation’s project to refresh the South Street Seaport with new attractions and retail tenants.

The Mr. C hotel is housed in a century-old building that was formerly home to the Seaport Inn and that received an extensive renovation before the boutique asset took over the spot. “Historic buildings, cobblestone streets, air and light, and you’re on the water—there’s a lot of unique things that [the area] has, and the views from our property are great,” Ghassemieh said.

The Cipriani family controls the hotel’s branded management company, in which Atlantic Pearl has a minority interest. The family traces its roots to Giuseppe Cipriani, a Venice bartender who established his own restaurant there in the 1930s. In 1985, his heirs expanded the business to New York City, where it operates restaurants and event spaces in Lower Manhattan and in Midtown. Eight years ago, Maggio and Ignazio Cipriani—brothers who are part of the family’s fourth generation in the hospitality industry—expanded the brand by launching the first Mr. C hotel in Beverly Hills, also owned by Atlantic Pearl. In addition to the Seaport location in New York, the chain has a third outpost in Miami, controlled by a different developer.

The hotel’s Bellini restaurant—named for the cocktail that was invented at the original Cipriani bar in Venice—serves meals and drinks on the ground floor, and there’s a fitness center for guests. Rates for Memorial Day weekend range from $255 per night for a king-bed room to $1,055 per night for a 550-square-foot suite with a large outdoor terrace.

The forthcoming CLO deal from Arbor that will include the Mr. C loan also includes an older loan on an office building in Brooklyn, at 160 Van Brunt Street in Red Hook, which was converted to office use from a prior industrial format and which hosts what was Tesla‘s first New York City showroom when the carmaker arrived in 2016. That loan, for a total of $43 million, was originated in August 2017, and just as with the Mr. C loan, $31 million of the Red Hook financing will be included in the CLO.

Representatives for Arbor did not immediately respond to inquiries.