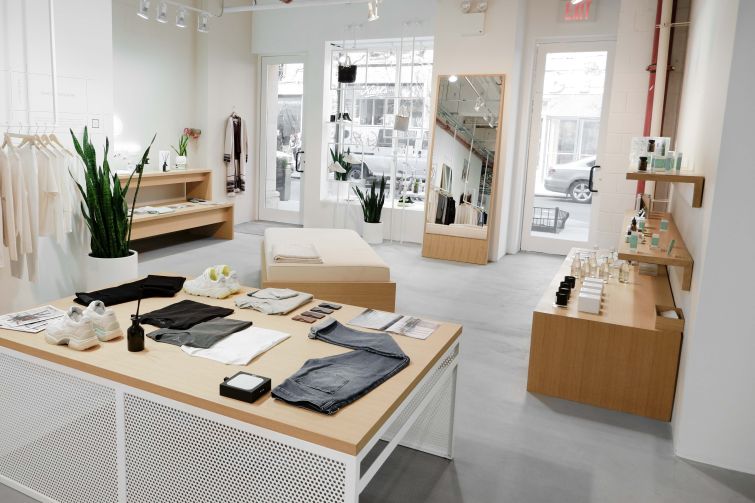 The decor inside Bulletin is reminiscent of an ice cream shop, with bubblegum pink floors, lemon yellow walls and shelves stocked with girl-power products.

The corner storefront in Williamsburg was the first of three locations for the startup, which features a roster of feminist brands including Thinx underwear, organic makeup and motivational posters for sale with messages like “Females are strong as hell.”

Bulletin is one of a small but growing number of retailers who are piloting a new retail concept, featuring multiple and rotating brands in a single space.

These companies, which range from venture-backed startups like Bulletin to retail behemoths like Simon Property Group, are capitalizing on the slew of digitally-native brands that want to get their products in front of customers.

The model combines the elements of flexibility and collaboration that helped coworking sweep the office industry. It allows for a large number of small brands to share a space and reduces the commitment and the overhead of a traditional lease.

Or that’s the idea anyway.

When Justin Kerzner launched Upton in 2015, he had one product line and a website. Kerzner’s company sold leather belts in three designs, and he hoped to sell luxury items at a more affordable price.

But when Kerzner was ready to get his product in front of customers, he realized he wouldn’t be able to pay the rent on his own.

“I wanted to open a collaborative retail space as a way to cover costs,” he said. He signed a 60-day lease, brought in some additional brands to share the space, and directed the store’s design.

“It was a little bit selfish to begin with, because I wanted to ensure that the quality of the experience was as good as mine,” he said.

Over time, Kerzner curated the retail model that began to take shape. Kerzner now has a 4,000-square-foot location in Soho, where he showcases a variety of brands which are swapped out every 30 to 90 days. “Every 30 days, we rebuild the store overnight,” he said.

Now operating under the name Naked Retail Group, Kerzner offers brands a completely hands-off rollout for a monthly fee, which can run anywhere from $5,000 to $50,000 a month. Naked works with online brands making their first foray into the real world, or with established brands like Nordstrom or Brooklinen that have a new product or campaign to promote.

Naked is expanding with a second location in Soho, in RFR’s boutique hotel at 11 Howard, and also offers brands a variety of retail and brand management services, including pop-up management outside their own spaces.

The model differs from company to company. Like Naked, many operate similarly to art galleries, regularly switching out their highly curated collections. Batch, which focuses on interior design, curates a new batch of products every season. Story, before it was bought by Macy’s, had themed collections that switched every six-to-eight weeks.

Other companies that may have more space to work with can offer brands the flexibility without the curation. At least two such firms have received venture funding in the past year. Showfields, which was founded by serial entrepreneur Tal Zvi Nathanel, leased RFR’s 11 Bond Street in NoHo, which spans 14,000 square feet. The startup, which also charges a monthly fee, raised $9 million in seed funding in January. The Texas-based Neighborhood Goods, which has a store in Plano and plans to expand to New York, also raised $9 million in a second seed round.

But while these companies are gaining interest from investors and increasing their footprint, the viability has not yet been proven.

“It’s a difficult model because you have to curate it right,” said Ariel Schuster, vice chairman at retail brokerage RKF. “There’s going to be a lot of change within those spaces, but eventually somebody will do it right.”

One company that got it right was the prototype, Story. The brand, which operated a store in Chelsea since 2011, was purchased by Macy’s in 2018 for an undisclosed amount, and its founder, Rachel Shechtman, became Macy’s brand experience officer. Last month, the department store rolled out color-themed Story stations in 36 stores across the nation. The theme will change every few months, which will give customers a “fresh reason to visit our stores,” Jeff Gennette, Macy’s CEO, said in a press release about the rollout.

Like Macy’s, several large players, including REITs, have tried similar models to varying degrees of success.

In 2017, General Growth Partners (GGP) launched a project called In Real Life at Water Tower Place, a mall in Chicago. The project, which was jointly run with pop-up manager The Lionesque Group, ran from August 2017 to January 2018. The first collection of brands, called “Chapter 1,” was home-themed and included furniture, wall art, ping pong tables and glassware from a variety of Chicago-based brands.

From its website, it appears that a “Chapter 2” was being developed, but GGP was acquired by Brookfield before the second run could be put to the test.

Simon Property Group debuted similar spaced called The Edit at Roosevelt Fields mall in Garden City, New York, also in 2017. The Edit is still operational, and a spokesperson for Simon said the group has plans to expand the program nationally this summer.

Zach Beloff, national director of business development at Simon, said that the purpose of The Edit was threefold, and that it benefited brands, Simon and the customers.

“We wanted the chance to give emerging brands the opportunity to try out a retail space with a ‘turnkey’ retail package. We wanted to remove the barriers to retail entry,” Beloff said.

“Second, we wanted Simon to be the place to pilot new concepts for expansion purposes. And third, we wanted to give our customers a chance to interact in a physical location with new brands or brands that had only been online.”

Another large player in this space includes Macerich, which announced that it would be launching a “retail lab” called BrandBox for emerging brands.

WeWork, not one to be left out of any sector, has its own We branded stores. Its WeMRKT locations operate in WeWork buildings, are open only for members and sell products made by WeWork members. There are four locations in New York and the company has plans to roll out hundreds more, a spokesperson confirmed. There is also Made by We, a similar concept that’s open to the public in WeWork’s public location at 902 Broadway, which for now remains the only location in the works.

“As with all of our products and services, we look to test and perfect the service first before we expand,” a spokesperson for WeWork said.

For landlords, or asset-heavy companies like WeWork and Macy’s, the economics are different than a startup entering the retail curation space, since they already have the real estate. For Macy’s and Simon, their curated spaces can potentially drive traffic and be a testing ground for new brands, without adding to the overhead.

For startups, it can be trickier because they’re essentially middlemen, but with the overhead of a landlord.

And the biggest question for any new business model is whether it can scale. Kerzner believes it can.

“Scale is the best part,” he said. “If a brand does really well in store one, you’d think they’d want to be in all of them.”

Batch’s founder Lindsay Meyer echoed that thought. The San Francisco-based Batch recently opened its second location in Hudson Yards and Meyer hoped that the two stores would offer more exposure for brands and half the labor for her.

“We are going to tentatively move our batches, traveling circus style. When they would finish in San Francisco, they can come here, so that extends the runway for those products.”

However, one problem that RKF’s Schuster pointed out is that successful brands will quickly outgrow their need for short-term exposure.

“I think many of the brands that are selling inside of these [spaces], they’re looking to get out of them after the incubator,” he said.

Another founder that spoke with Commercial Observer was also skeptical. The founder said that while the model was sustainable, it wasn’t scalable. Being so asset heavy at a time that retailers were downsizing didn’t make sense in the long term, she said. While the company is continuing to operate their storefronts, they’re planning to pivot in the near future to a version that lives online primarily.

“I don’t think anyone knows the answer to this, but all of these attempts are important because they are leading to the answer,” said Richard Kestenbaum, a partner at Triangle Capital.