Airbnb Does an About-Face and Gets Into the Hotel Business 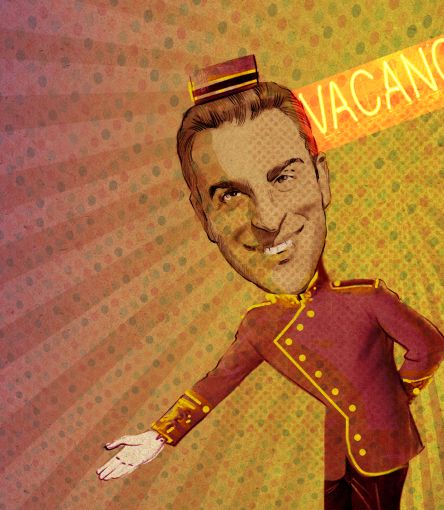 Brian Chesky, who has long positioned himself as a disruptor of the hotel business, is investing in more traditional hospitality companies. Illustration: Val Bochkov

After more than a decade of positioning itself as a hotel killer, Airbnb is starting to get into the traditional hotel business. The San Francisco-based startup has been investing in and acquiring other hotel booking sites, and it will help RXR Realty operate a hotel at 75 Rockefeller Plaza.

The RXR deal is the first of its kind for Airbnb, which has spent years battling New York City’s government because its business model encourages homeowners and tenants to violate city short-term rental laws. RXR plans to convert ten floors of 75 Rockefeller Plaza, a 1940s office building in Midtown, into “high-end apartment-style suites with a diverse mix of amenities,” the real estate company announced last week. The hotel portion of the 33-story building will feature a slew of amenities including access to a private social club and business center on the property’s top floor, coworking areas, a new ground floor restaurant and bar, event space and various food options.

The arrangement is unusual for Airbnb because it’s pretty by the book, as travel accommodations go. Hotel staff will be unionized, and everything will follow the city’s strict building and fire codes for hotels.

Airbnb doesn’t have a financial stake in the partnership with RXR, according to an Airbnb spokesman. But it will feature 75 Rock’s 200 rooms on its heavily-used listings platform. And the short-term rental company will bring in its in-house design team to build out the rooms and common areas.

“With the lines between business travel and leisure travel becoming increasingly blurred, RXR and Airbnb are offering a travel experience that immerses guests in a dynamic, thriving community in the heart of Rockefeller Center that’s vastly different than anything else in the market today,” RXR CEO Scott Rechler said in a statement.

Airbnb, which was recently valued at $35 billion, acquired last-minute hotel booking platform HotelTonight last month for more than $450 million. The company says that it purchased HotelTonight, which focuses on boutique lodging, because it wanted travelers who stay in hotels to be able to book their accommodations through Airbnb, rather than going to a competitor like HomeAway or Booking.com. The idea is to make Airbnb more of a one-stop shop for guests who want to stay in traditional hotels and reserve at the last minute, instead of following the typical Airbnb model of booking in advance and staying in someone’s home.

“The Airbnb community is broad and diverse, with more than 6 million places to stay around the world, including boutique hotels,” an Airbnb spokesman said in a statement to Commercial Observer. “In the past 10 years, the needs of our hosts have changed, along with the needs of our guests, and we want to make sure Airbnb is a place for everyone. We’re working with hospitality entrepreneurs—property managers, boutique hotels, and real estate professionals—to help them connect with guests, create magical stays and grow their businesses. For guests, hospitality entrepreneurs bring more accommodation choices to Airbnb; for hosts, Airbnb offers scale and new travel audiences to grow their businesses.”

The home-sharing company also just invested in Lyric, a firm that provides serviced apartments—what it calls “creative suites”—in cities around the country. Airbnb led a $160 million funding round in April for the San Francisco-based company, along with investors like Tishman Speyer, RXR Realty and Starwood Capital Group CEO Barry Sternlicht.

“We think of Lyric as a network of accommodation spaces that are designed for the modern business traveller,” said Joe Fraiman, the president and co-founder of Lyric. “When they travel they don’t just want a place to sleep, but they want to be connected to the local community. They don’t just want to stay in a soulless hotel in Times Square; they want to be in a more interesting part of the city.”

Basically, Lyric signs long-term leases with landlords of residential and commercial properties and designs and furnishes apartment-style suites that include full kitchens and living rooms. Then it rents those suites out on a nightly basis, just like a traditional hotel. And it hires local staff to manage those buildings, clean the rooms, and help guests if they have any issues during their stay. Fraiman also touted the suites’ hipster features, including pour-over coffee makers stocked with locally sourced beans, custom wallpapers, and record players with vinyl records produced by local musicians.

Although the four-and-a-half-year-old company doesn’t really consider itself a hotel operator, that is effectively what it is, especially in cities like New York, which has strict rules delineating apartments from hotels.

“We’re always trying to be thoughtful of the zoning and land use in every market we operate in,” Fraiman explained. That attitude feels like a significant departure from Airbnb, which the city government has sued in order to compel the company to release information about hosts who rent their homes out on a nightly basis.

In fact, Lyric just announced its first New York City outpost at 70 Pine Street in the Financial District. The company will operate 132 studios, one- and two-bedrooms on the third through sixth floors of the 67-story tower. Those floors have been operated as an extended-stay hotel by Q&A Residential since Rose Associates, Eastbridge Group and AG Real Estate converted the rest of the Art Deco office tower to 612 luxury rentals in 2014. Room sizes for Lyric’s 70 Pine suites range from 500- and 800-square-foot studios to one-bedrooms as large as 1,400 square feet. Nightly room rates will run from the low $200s to the $500s.

Airbnb’s foray into the traditional hotel business might come as a surprise to New Yorkers. In the five boroughs, most residents know that the core of Airbnb’s business—enabling people to rent apartments and homes out for less than 30 days—is illegal if the owner or tenant is gone. Over the past four years, both the City Council and the state legislature have passed laws that penalize Airbnb hosts with big fines and, in some cases, civil or criminal charges. Since Mayor Bill de Blasio took office four years ago, the Mayor’s Office of Special Enforcement has focused much of its energy on enforcing against renters and homeowners who break the law by subletting apartments on a nightly basis. The city even passed a law last August that would force Airbnb to turn over data on hosts to the mayor’s office on a monthly basis. However, a federal district court judge in Manhattan blocked the city from enforcing the law in January, arguing that it violated constitutional protections against illegal searches, The Wall Street Journal reported.

As New York City enforces more aggressively against Airbnb hosts, the company may always struggle to grow its business in the five boroughs, which make up its largest market in the U.S.

All of this is happening as Airbnb prepares for its initial public offering (IPO). The company is seeking to diversify its business and bolster its valuation before it goes public, which is expected to occur sometime in 2020. As it figures out a way to expand beyond the hospitality business, it has considered rolling out transportation services and even streaming video content. In February, the home-sharing giant hired airline executive Fred Reid, the founding chief executive officer of Virgin America, as its first global head of transportation. Although Airbnb didn’t announce specific plans for its transportation business, a source told Reuters that it hopes to partner with transportation providers like taxi fleets and tour bus operators in order to offer their services on Airbnb’s platform. Similarly, Reuters reported last month that Airbnb wanted to develop a slate of original shows focused on travel and featuring Airbnb guests, hosts and travel locales. The startup has already worked on a show called “Home” for Apple’s upcoming streaming service and produced a documentary focused on the San Francisco Gay Men’s Chorus. Ultimately, hotels may not be the only industry Airbnb is trying to disrupt.