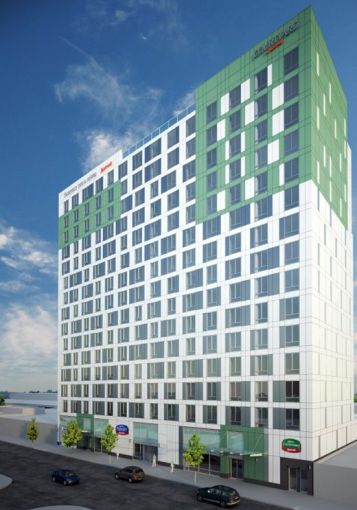 A rendering of the planned hotel in Jamaica, Queens. Image: Meridian Capital Group

A hotel under development in Queens’ Jamaica section near Kennedy International Airport has pinned down a $58.5 million refinancing of its construction loan, Commercial Observer can first report.

The debt comes to the developer, United Construction, from ACORE Capital, a heavyweight real estate debt fund, according to sources with knowledge of the deal. The deal, which has a 37-month term, comes with two extension options and its term begins with 18 months of interest-only payments at the head of a 25-year amortization schedule.

The new mortgage refinances a previous debt package worth $35.8 million from Latitude Management Real Estate Capital, a subsidiary of LaSalle Investment Management that was extended to United in 2017, according to city property records. The debt funds development of a dual-branded Marriott Courtyard and Fairfield Inn hotel at 148-22 Archer Avenue. That’s one block east of the Jamaica train station, which is served by the AirTrain JFK airport connector and is also a major hub for the Long Island Rail Road.

“The Marriott Courtyard and Fairfield Inn [will] transform the Jamaica Station submarket, and we’re happy to have been a part of it,” Betesh said in a statement. “Closing a cash-out refinance during construction is not a simple task. However, our client has a strong track-record managing and completing similar hotels and we were able to get him a swift execution.”

The 15-story, 203,000-square-foot hotel will include 224 Marriott Courtyard rooms and 114 Fairfield Inn units for a total of 338. There will also be a café, a fitness center and onsite parking.

The hotel structure, planned for completion in the next five months, abuts the Long Island Rail Road tracks to the south and already towers over many of the low-slung commercial buildings that neighbor it to the north.

Once written off as a crime-riddled zone neglected by developers, Jamaica has rebounded in recent years. Crime has fallen dramatically—down 80.6 percent since 1990, according to New York Police Department statistics—and upward price trajectories have increasingly drawn investors’ eyes.

Following a 2007 rezoning designed to encourage more development, a number of hotel projects have sprung up, including the Archer Avenue endeavor. Three big apartment complexes, Anchor Green Apartments, Crossing at Jamaica Station and another building at 147-07 94th Avenue will combine to bring more than 1,500 new residential units to the neighborhood.

United Construction, led by founder Jiashu “Chris” Xu, also controls branded hotels in Manhattan and near LaGuardia Airport and is at work on a new lodging in Long Island City. It’s also the firm behind Skyline Tower, a planned 67-story skyscraper in Long Island City that United says will be one of Queens’ tallest buildings when its 802 condominium units are completed in 2021.

A spokeswoman for United Construction declined to comment. An ACORE representative did not immediately respond to an inquiry.