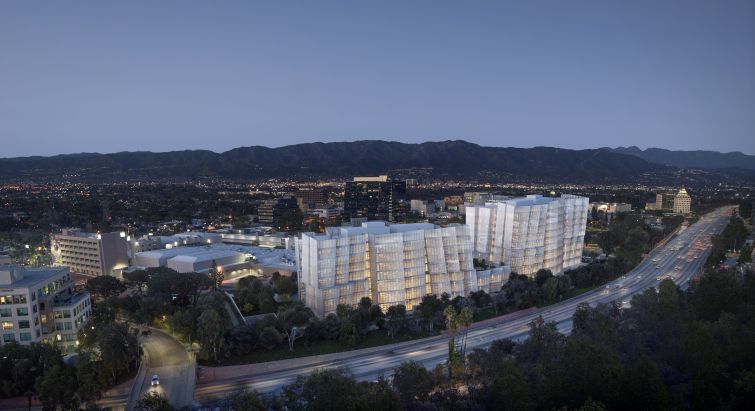 Warner Bros. announced plans for a major expansion in Burbank, Calif., in which the entertainment giant will buy The Burbank Studios and be the sole and long-term tenants two Frank Gehry-designed office towers.

The two buildings, fashioned to look like icebergs floating alongside the 134 Freeway, were developed by Worthe Real Estate Group and Stockbridge Real Estate Fund, according to Deadline, who first reported the news. Warner Bros. will move into the new buildings in 2023 to coincide with the AT&T-owned studio’s 100th anniversary.

Warner Bros. was represented in-house by Michael Mason, while Carl Muhlstein of JLL advised Burbank Studios in the transaction.

The deal was announced by Kim Williams, the executive vice president and CFO of Warner Bros., Jeff Worthe, the president of Worthe Real Estate Group, and Gehry.

“This is an opportunity to reimagine not only our workspace but our future,” Williams said in a statement. “Along with our historic lot, the newly expanded campus will fuel increased creativity, facilitate collaboration and help us attract and retain the world’s best and most diverse talent. It will also better position our company for the future and provide for more production capacity.”

As part of the transaction, Warner Bros. will purchase The Burbank Studios property, exclusive of the land on which the two Gehry buildings are to be built (which will continue to be owned by Worthe and Stockbridge). The Studios purchase will provide the entertainment studio with additional production office space and eight sound stages, as well as a mill building and commissary, per the release.

Financial terms of the transaction were not revealed, but based on similar recent office deals, The Los Angeles Times  suggested its value would surpass $800 million, and called it “one of the largest and most complex real estate transactions ever in Burbank.”

The complex that Warner Bros. agreed to buy, positioned along West Alameda Avenue, is the former headquarters of NBC Entertainment and the TV home to such talk show giants as Jay Leno and Johnny Carson.

Warner Bros. is actually buying back property that it once owned, per the Times. (Studio co-founder Jack Warner sold the parcel to NBC in 1951.)