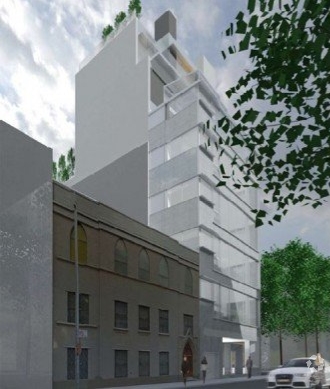 The LLC behind Six Sigma’s stalled Chelsea luxury condominium project near the High Line has filed for bankruptcy a second time, and now plans to go back to the drawing board without its longtime developer, court documents show.

Project 19 Highline LLC, which backs The Pool House at 435 West 19th Street, has more than $40 million in debt, most of it already sunk into trying to turn the eight-story former sound-stage manufacturer headquarters into an upscale condo, according to the Chapter 11 filing obtained via Nationwide Research Company.

According to last Friday’s filing, lender Churchill Real Estate Holdings ousted Jason Lee and his Six Sigma as the developer and replaced him with William Henrich, the co-chairman of corporate restructuring firm Getzler Henrich & Associates. The move followed a September 2018 suit where Churchill accuses Lee of skimming $292,000 from the project’s budget, The Real Deal reported. This January, Lee and Church settled the suit, Law360 reported.

Lee, Henrich, Churchill and Kevin Nash, the lawyer for the LLC, did not immediately respond to a request for comment.

Henrich claims in court documents that “it no longer appears” it can renovate the building into a condo “efficiently” and instead wants to completely demolish the existing structure. He estimates the work to take “a year or more” to finish and Churchill plans to put up more loans.

Six Sigma bought the building between Ninth and 10th Avenues for $21 million in 2014, financing the purchase with $29 million from Knighthead Funding, TRD reported. The developer planned to turn it into a $60 million condo, originally called Highline 19, designed by Pei Partnerships with each of the 20 units having its own private pool.

In 2016, Madison Realty Capital gave Six Sigma a $37 million construction loan for the project and in February 2018 Six Sigma refinanced the project again with a $36 million mortgage and $4 million mezzanine loan from Churchill, according to the Commercial Observer and TRD.

After the first bankruptcy filing in 2018, Churchill sought to have Henrich take over managing the project and faced opposition from Lee until after the settlement, per the filing.

“It’s certainly a case where the lenders were able to overcome the debtor-friendly protections of bankruptcy and end up gaining control of the asset,” said Adam Stein-Sapir, a co-managing partner of Pioneer Funding Group, which specializes in analyzing and investing in bankruptcy cases, and who is not involved in the case. “Normally it can take quite a while.”

The filings estimate that the asset is worth about $55 million, and with the $40 million already sunk in, Stein-Sapir added, “it’s very unlikely there will be any money left over for Mr. Lee.”