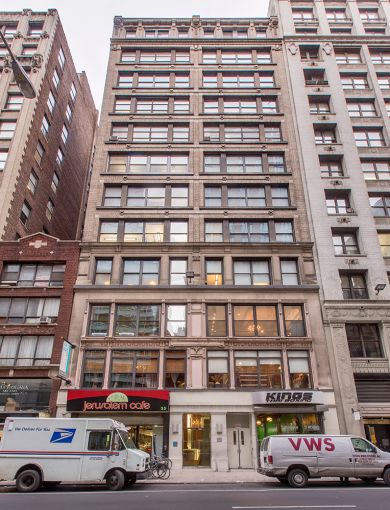 Hidrock Properties refinanced its office asset at 35 West 36th Street with a $32 million loan from mortgage REIT Ladder Capital Finance, according to city records and information from Hidrock and HFF, which arranged the debt.

“Hidrock Properties is … dedicated to long-term investment in commercial real estate properties and 35 West 36th Street was no exception,” Klein said.  “The office property has been and continues to be well-maintained and is a testament to Hidrock’s 12-year ownership of the building.”

Built in 1911, the fully-leased property—between Fifth Avenue and Avenue of the Americas—has roughly 7,080 square feet of ground-floor retail space, which, right now, houses a Jerusalem Café and a Kings Thai Boxing kickboxing gym.

Hidrock, in partnership with insurer Assurant, acquired the building for $28 million in December 2007, with help from a loan from Assurant Asset Management, records show. After the purchase, Hidrock underwent a renovation campaign that included everything from the lobby, windows, elevators, bathrooms and boiler. The firm also provided for column free space and high ceilings, according to its website.

“What drew us to acquire this building in 2007 was its central location and proximity to mass transit, including walking distance to both Grand Central Station and Penn Station,” Hidrock CEO Abie Hidary said in a statement. “We are pleased to have seen its value increase steadily as we redesigned, renovated and re-tenanted the building over the years.”

Officials at Ladder did not immediately respond to an inquiry.