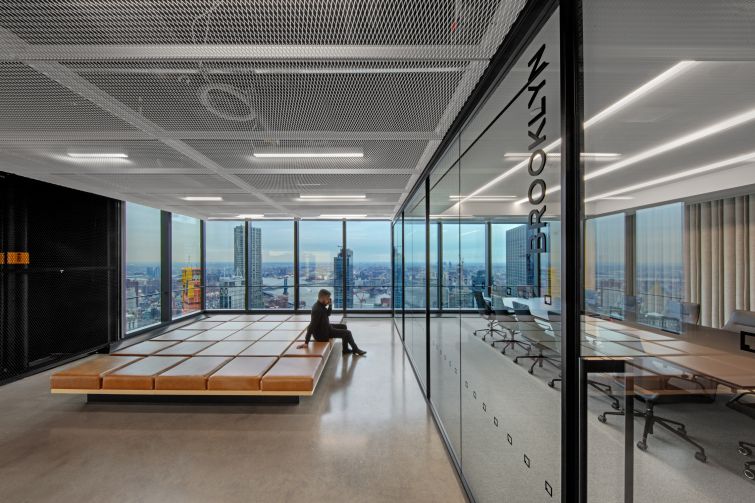 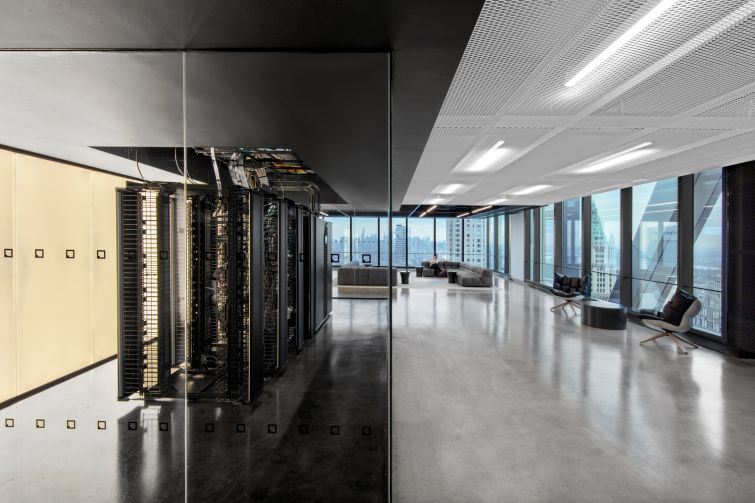 Much of the office was designed around the concept of transparency, which is one of IEX's core principles. IEX chose to put a glassed-in server room in the front of the office to convey that it's both a data company and a financial one. Photo: Eric Laignel 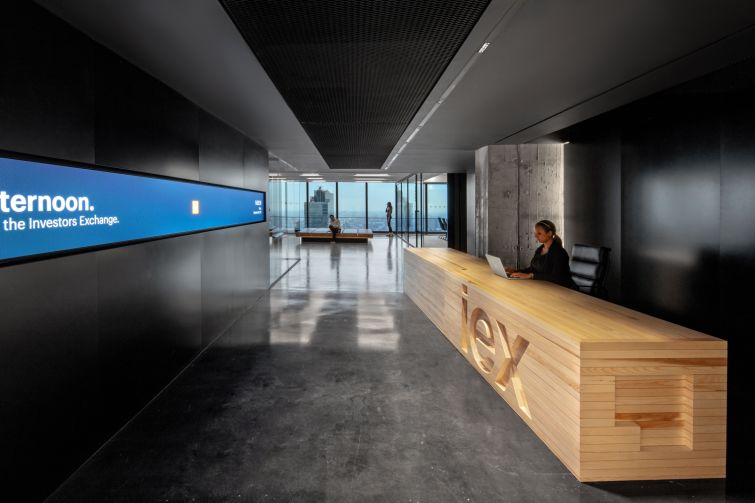 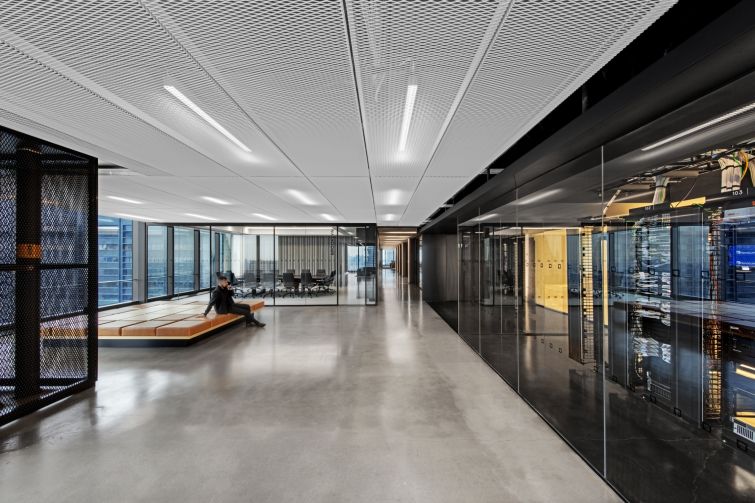 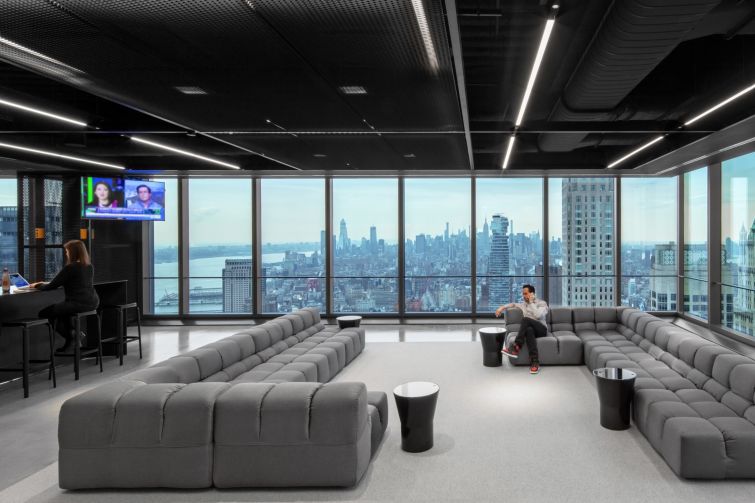 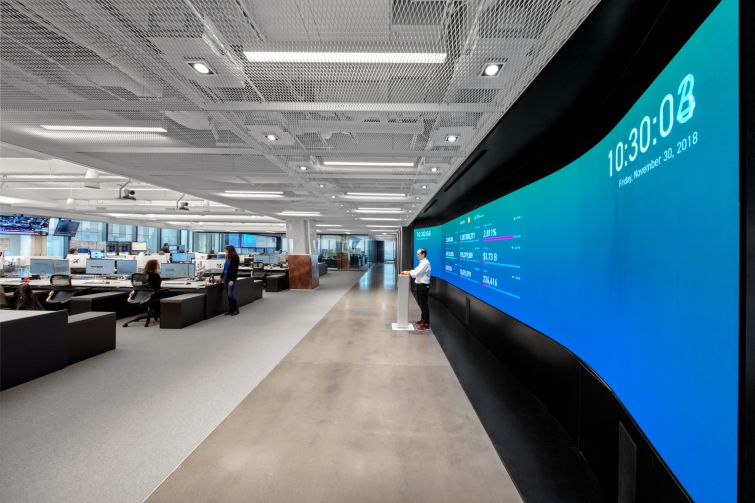 The main work space features a 30-foot-long screen and a pedestal where IEX opens and closes its stock exchange every day. Photo: Eric Laignel 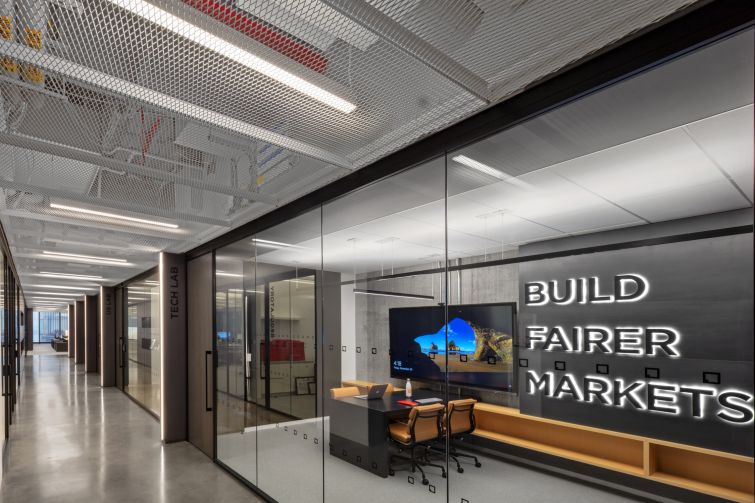 One conference room is emblazoned with the message "Build Fairer Markets," the company's motto. It has a high-tech display so the company's programmers can do code reviews there. Photo: Eric Laignel 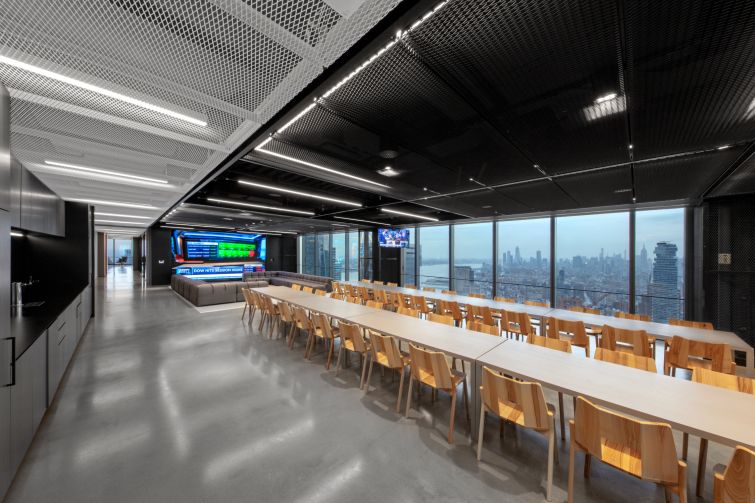 A long table set up for a company town hall. Photo: Eric Laignel 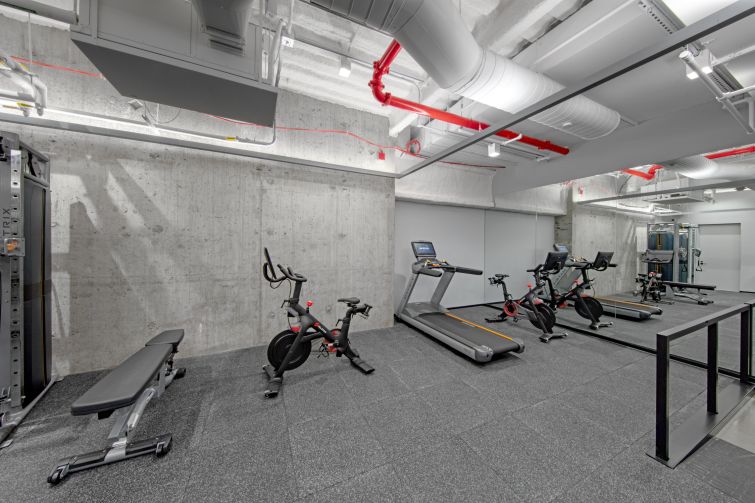 IEX also put in a gym and mother's room for its employees. Photo: Eric Laignel
Previous Next

With their partners John Schwall and Rob Park, they set out to build a fairer, more transparent stock exchange. Their new offices at Silverstein Properties’ 3 World Trade Center, designed by Ken Tracey of TPG Architecture, reflect that philosophy of simplicity and transparency.

After walking through the dark, black metal-walled reception area, there’s a glassed-in room full of server racks that handle the office’s data and telecom needs. Since IEX handles much of its trading with data centers in New Jersey and Chicago, the office server room was “purely put there for the aesthetic design,” said Schwall, IEX’s COO. “The point is to show we’re both a finance company and a data company.”

There are several glass-walled conference rooms with black and white walls and standing benches, including one room emblazoned with the backlit message “Build Fairer Markets” and a large interactive screen.

“That room gets used to conduct code reviews and simulations of the exchange,” Schwall explained. “At any given time you’ll see programmers sitting around that screen pointing to lines of code and seeing exactly how it’s operating.”

Of course, it’s not just a tech startup, it’s a stock exchange. Opposite the spacious, open main work area is a black wall with a 30-foot-long, 10-foot-high projected display of the market data. Every morning and evening, someone stands behind the small white pedestal in front of the screen and “rings” a digital bell to open and close the market.

The space also features several large seating areas—one is furnished with a large, square mid-century modern bench, another with a pair of gray, L-shaped sectional couches. The office has plenty of the faux-industrial touches typical of tech offices, including polished concrete floors and exposed ceilings finished with suspended gray mesh panelling. To keep its employees happy, IEX built a gym and a mother’s room.

“Being at the World Trade Center is very important to many of us,” said Schwall. “We feel like we’re in the heart of American capitalism here.” 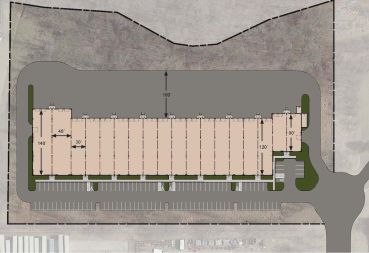 What Do Business Communities Do Now?