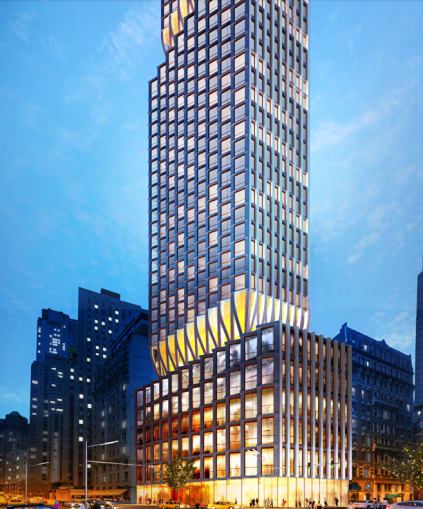 A rendering of 211 West 54th Street, as Extell had envisioned it before the company tried to sell the lot. Image: Colliers International

Extell Development has reeled in a $122.4 million refinancing on a development site it owns in Midtown, according to property records.

The loan package, from JVP Management, provides Extell $66.4 million in new debt on the site in the form of a gap mortgage and additionally refreshes prior financing provided by Bank OZK over the last few years, the documents show. The two-year debt comes with a one-year extension option and carries a floating interest rate of 4.5 percent over LIBOR, according to documents Extell filed on the Tel Aviv Stock Exchange.

Last year, Yoron Cohen, a Colliers International sales broker, said that Extell—led by Gary Barnett—had plans to sell off the plot to a buyer who would demolish the empty building that stands there today in favor of pied-a-terre-style apartments.

“We think the highest and best use in this point of the market is residential,” Cohen said at the time.

Extell originally meant to develop the parcel along with surrounding lots itself, but it had a hard time convincing neighboring landlords to sell, Cohen told Commercial Observer. Instead, Extell changed course. It rebranded the site, which had been known as 1710 Broadway, and called it 211 West 54th Street, which it deemed a more suitable residential address. Extell then started shopping it around to residential developers, hoping to sell for somewhere around $200 million.

Those plans appear to have changed, but an Extell spokeswoman didn’t immediately respond to inquiries about what threw the plans off course.

Cohen said recently that he’s no longer involved in the property.

“I do not market 1710 Broadway, which we last marketed as 211 West 54th Street,” Cohen told Commercial Observer in an email in February. “We took it off the market and frankly I have no idea if Extell is refinancing it or not.”

Representatives for JVP, a private lender led by Van Nguyen, could not immediately be reached.