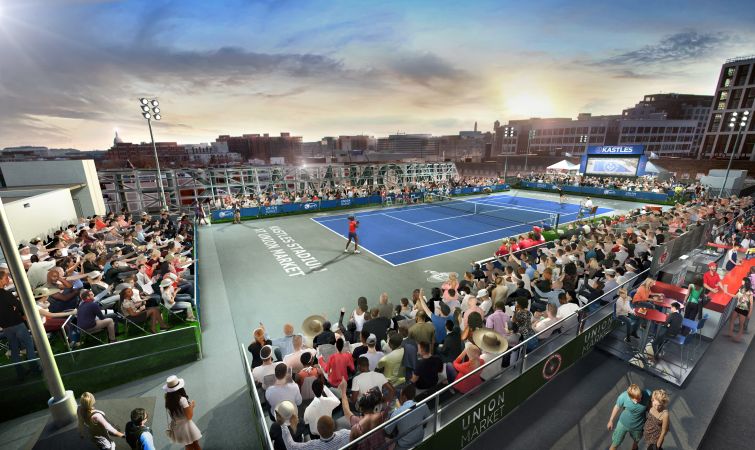 Edens, a Washington, D.C-based real estate developer, is constructing a pop-up stadium for the city’s pro-tennis team, the Washington Kastles, on the rooftop of Union Market at 1309 5th Street NE, according to a joint press release from Edens and the Kastles.

The 700-seat outdoor stadium will feature a combination of premium seating options such as VIP dinner tables, court-side boxes and sideline seats along with “more affordable options so that everyone can enjoy the Kastles experience,” according to the release.

Seven-time Grand Slam champion Venus Williams, 2019 Mexican Open champion Nick Kyrgios and Maryland native Frances Tiafoe are among the Kastle players expected to play this summer, as part of the 44th season of World TeamTennnis in D.C. Play will commence on July 15 and run through July 29. The real estate terms of the stadium deal were not disclosed.

“We are honored to play our part in creating a community that reaches not only our immediate neighbors, but much further, providing connections and experiences that enrich those who spend time here,” Edens CEO Jodie McLean said in a prepared statement. “Our financial and emotional investments in the Union Market District are aimed at building a community of creativity, innovation and inclusion for all.”

Union Market has become “a great unifier for our community,” said Kastles owner Mark Ein in a prepared statement. “Kastles Stadium at Union Market will be the perfect home court for our franchise and will connect people from all walks of life throughout the region.”

Ein founded the local tennis franchise in 2008, as Commercial Observer previously reported. Over the years, the team has played in various locations across the city, most recently on the campus of George Washington University.

Edens has long-term plans to create an 8,000-square-foot park and entertainment venue on Union Market’s rooftop that will offer food and beverages while hosting community events. The firm is waiting for approval from the D.C. Zoning Commission to move forward on that project, according to the release.