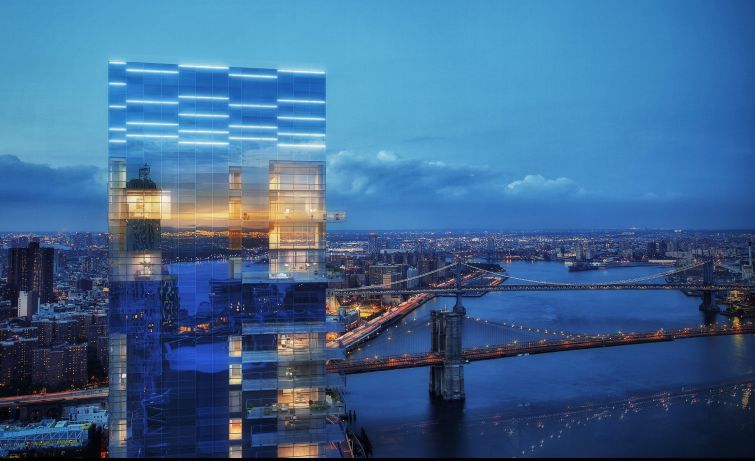 A rendering of 1 Seaport, aka 161 Maiden Lane, which is allegedly leaning due to faulty construction. Image: Williams NY

A Financial District condominium tower is leaning, and the contractor on the project claims the developer is to blame.

The 670-foot-tall, 58-story apartment building under construction at 161 Maiden Lane is leaning three inches to the north, according to a lawsuit filed in New York State Supreme Court by the project’s contractor, Pizzarotti. An off-kilter foundation is affecting the building’s structural integrity, facade, waterproofing and elevators, the recent suit argues.

Developer Fortis Property Group, working with a previous general contractor, opted not to drive piles into the soft ground of the site by South Street Seaport on the East River before it laid the foundation because Fortis wanted to save money, the contractor claims in the suit. Instead, Pizarrotti alleges, Fortis decided to use a cheaper “soil improvement” method, which involves compacting and draining the damp earth to make it more stable.

The foundation work was done before Fortis hired Pizzarotti to oversee construction in December 2015. In April of 2018, RC Structures, the concrete subcontractor on the high-rise, reported that “there are structural issues, unusual settlement up to three inches, and the building is leaning three inches to the north,” per the complaint. Pizzarotti actually replaced the previous concrete company, SSC High Rise Construction, earlier that month, The Real Deal reported. One of SSC’s employees, Juan Chonillo, fell to his death from the 29th floor in October 2017, as DNAinfo and other outlets reported at the time. The concrete company ultimately pleaded guilty to manslaughter in the case, per TRD. SSC couldn’t be reached for comment.

Then in June of last year, the company handling the facade work said the curtain wall frame on the 21st floor was leaning two inches further east than on the 11th floor. Although the building’s superstructure was finished in September 2018, Pizzarotti hasn’t been able to install the curtain wall because Fortis hasn’t designed a new facade system that accommodates the leaning, the suit says. The building will continue to settle and move unless the problem in the foundation is fixed, the general contractor posits. Pizzarotti claims to be worried about the facade panels breaking off and falling, the elevator rails failing to remain vertical, waterproofing, corrosion and what might happen to the structure if it isn’t stabilized. As a result, the company says it notified Fortis that it would terminate the construction contract on March 1. The general contractor hopes to recover the cost of overruns that it spent on the development—which numbers in the tens of millions—and get an injunction preventing Fortis from proceeding with work unless it redesigns the building.

“This lawsuit is patently false from start to finish and nothing more than simple defamation and a desperate attempt by a failing general contractor to divert attention from the fact it defaulted on yet another New York City project,” a Fortis spokesman said in a statement provided to Commercial Observer. “As a number of prominent New York City developers have learned the hard way over the past few years, Pizzarotti is simply incapable of buying out, managing and completing a construction project within contractually promised timelines.”

Christopher Kinzel, the attorney for Pizzarotti, declined to comment on the suit, and representatives for the company couldn’t immediately be reached for comment. Fortis’ attorneys, Neal Eiseman and Michael Fleishman, didn’t immediately return a request for comment.

The Fortis spokesman acknowledged that the structure “had an alignment issue,” but said it doesn’t affect the safety of the building, as Pizzarotti claimed. The general contractor caused the leaning condition by failing to plan for the settling of the foundation while pouring the concrete slabs of the building, the spokesman shot back. He claimed that Fortis’ engineers had designed the foundation to account for “differential settlement,” which is when a foundation settles unevenly because of soil conditions.

Pizzarotti never terminated the contract and continued working on the development until this week, the Fortis representative said. The developer charges that by March 2018, Pizzarrotti’s work had caused more than 260 days of stop-work orders from the New York City Department of Buildings. In fact, the project spent 311 days under partial stop-work orders and 58 days under full stop-work orders, according to information provided by DOB spokespeople. As a result, Pizzarotti had already paid for $25 million in cost overruns, per the spokesman. Fortis has brought on a new general contractor, Ray Builders, to redesign the facade and resolve the “alignment issue.” The new firm started work today, and Fortis has officially ended its agreement with Pizzarotti. Ray has begun in stalling the revamped facade.

“As two of the top engineering firms in the world—Arup and WSP—have certified, there are no safety issues at the building and construction can continue immediately,” the Fortis spokesman said in remarks to Commercial Observer. “The fact that Pizzarotti has had more than 70 of its own employees and subcontractors working throughout the building over the past several months (including as recently as last week) substantiates Pizzarotti’s duplicity and underlying intent to defame the project. This is simply a matter of a slight redesign of the building’s curtain wall, which is already being worked on by our new general contractor, Ray Builders.”

Jacob Mermelstein, the CEO of Ray Builders, sided with Fortis on the leaning building. “[Pizzarotti] didn’t pour the slabs correctly so we have to accommodate for their poor construction practice in the installation of the curtain wall,” he said.

It’s not the first time Fortis has been sued by a contractor. ICS Builders and Fortis sued each other last summer over a contract dispute involving work at the Polhemus Building, a former Long Island College Hospital property that was being converted to condominium units, as CO reported at the time.