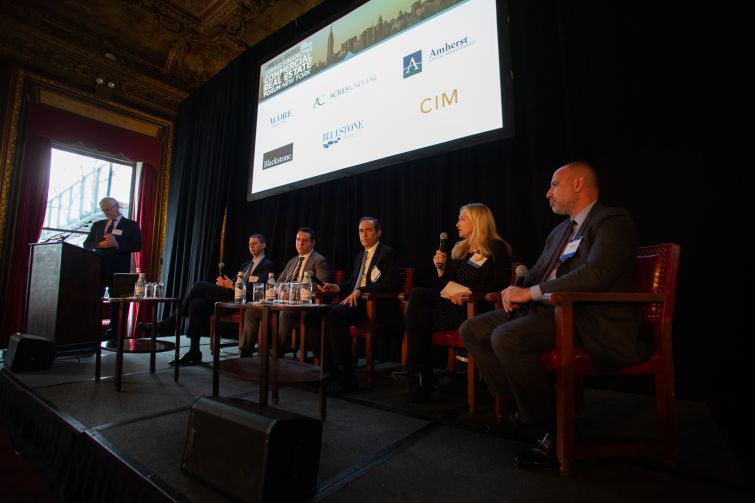 Over the last 10 years, with asset prices consistently on the upward march, lending money against commercial real estate has been nice work if you can get it.

One obstacle, of course, has been incessant competition. But the business also poses another broad strategic question: Where’s a lender—especially one without a bank’s gigantic balance sheet—to come upon all those billions of dollars to lend?

There’s always been the loan-on-loan approach, in which a financier borrows a fixed amount for the explicit purpose of putting it into a mortgage. Sufficiently reputable operators can also leverage lines of credit, in which a benefactor institution hands the would-be lender access to a fixed volume of capital for deals it’s yet to come across.

But last year, transitional real estate lenders especially tapped a third reservoir of capital: public markets, which they accessed by slicing up bridge loans into bonds and setting them out for sale in transactions called collateralized loan obligations. And like players from all walks of real estate finance over the last 12 months, panelists at Commercial Observer’s Financing Commercial Real Estate Forum were buzzing about the resurgent financing tactic this week in a panel moderated by Richard Jones, a partner at Dechert.

“The cost of funds on a static CLO is about 150 [basis points] over Libor,” Vinson said, referring to the simplest type of CLOs. Managed CLOs, which give the issuer more flexibility, can be more expensive, but not much—around a 180 basis-point spread, he noted. “I’m not going to talk about [warehouse] costs of funds, but 180 is very attractive to most of our clients.”

Capital that cheap would beguile any lender chomping at the bit to put debt into the market. Indeed, a key question surrounding CLOs’ rise is whether their prominence will goad lenders into making loans they probably shouldn’t. Before the financial crisis, collateralized debt obligations—a closely related, if less disciplined, structure—were everywhere, but many blew up once asset prices sank.

In the early going, there’s been no sign of a repeat calamity waiting to happen, CLO boosters insist.

“We haven’t seen underwriting deteriorate at all,” said Aaron Appel, who has arranged CLO financings for his mortgage-seeking clients at JLL‘s real estate investment banking division.

Michael Eglit of Blackstone, a gigantic lender that issued one of the biggest CLOs in history when it unleashed a billion-dollar deal in 2017, agreed. The capital being used these days is less leveraged all the way to its source, he said.

“Our underlying loans were 65 percent to 70 percent loan to value,” with an advance rate of somewhere around 80 percent, in the massive 2017 transaction, Eglit said. “Before [the financial crisis], you were getting an 85 percent to 90 percent advance, and on higher leverage.”

But here and there, some panelists admitted, CLOs were already raising isolated concerns. For one thing, some CLO borrowers who don’t progress as quickly as hoped on a transitional real estate project could be forced to turn to the CLO markets again in short order for an embarrassing second bridge loan, a situation known as bridge-to-bridge. The problem effects any kind of transitional loan has become especially visible in the CLO space, according to Amherst Capital‘s Abbe Borok.

“Commercial real estate CLOs seem to be driving the bridge-to-bridge execution,” Borok said “Those deals where borrowers have gone through a few years and created some cashflow”—but not enough—”fit better in CRE CLOs.”

Rating agencies, whose stamps of approval give public buyers the confidence to lap up CLOs on the open market, aren’t thrilled. “We do get agency pushback in bridge to bridge,” Borok said.

Others in the industry are more fretful about managed CLOs, which let issuers prolong a deal’s life by refreshing the transaction with new loans as the original debts pay off. Because investors and rating agencies have already bought in, there’s more moral hazard at play when investors select the second round of investments, some argue.

“Reinvestment is where you might get trouble,” Mark Fogel, the CEO of middle-market lender ACRES Capital, warned. “When everyone can reinvest, it leads to sloppier underwriting, and leads to the wrong risk-return setup. That’s where things start to fail.”