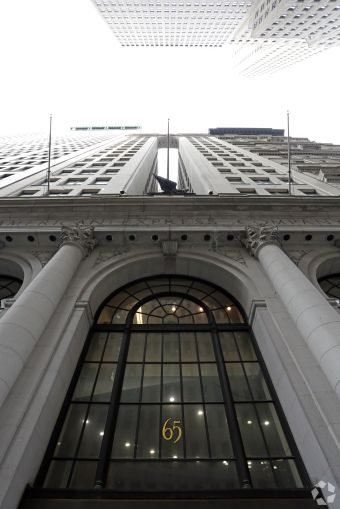 The owners of Lower Manhattan’s historic American Express Building have nabbed a $151.5 million CMBS refinancing from CCRE, according to a Kroll Bond Rating Agency analysis.

The Chetrit Group and Read Property Group share ownership of the 355,000-square-foot tower at 65 Broadway, between Morris Street and Rector Street. They’ll pay a fixed 4.94 percent interest rate on the CMBS portion of the transaction, which accounts for about a quarter of the overall debt package. The financing is good for five years, and the developers won’t owe any principal payments until maturity.

Built in 1917, the 21-story tower was American Express‘ headquarters until 1975, when the credit giant moved to new offices at the corner of Water Street and Coenties Slip. 65 Broadway then became the head office for the American Bureau of Shipping. In more recent decades, it served as a home to J.J. Kenny Drake, a bond dealer, and Standard and Poor’s, a credit-rating agency. Chetrit and Read bought an interest in the tower in 2005, and gradually built a controlling share through a series of later deals that concluded in 2015.

The new loan refinances a prior $102.4 million debt package from New York Community Bank, and lets the owners unlock $30.5 million in cash. Now that S&P has moved on to new digs at 55 Water Street, tenancy is more equitably split among 70 renters, but the building remains 99 percent leased.

The biggest tenant is Arbor E&T, a firm that contracts with companies to provide employee services like counseling and education. Part of its lease expires in 2019, but Arbor is committed to most of its space in the building for ten more years. Other big occupants include a fertility clinic, an insurance company and the Stella Adler acting school.

Last year, the building earned just over $14 million in rent, against expenses of $6.7 million. Since taking full ownership in 2015, Chetrit and Read have spent $16.7 million to renovate the lobby and improve office spaces.

The deal marks a notable win for CCRE, which is aiming to grow its market share in CMBS conduit deals under the leadership of industry veteran Paul Vanderslice, who took over last July after more than 30 years at Citigroup.

“Our volume expectations are to double the $2 billion we achieved in 2018,” Vanderslice told Commercial Observer last month.

Representatives for Chetrit and Read—which is led by Robert Wolf—could not immediately be reached.