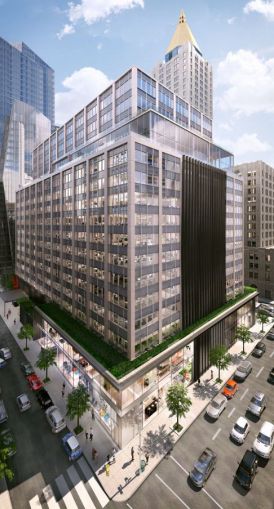 CBS will keep its 164,000-square-foot offices at 28 East 28th Street near Madison Square Park, months after Facebook was reportedly in talks to take over the entire building.

The television network inked a 15-year renewal for its space on the entire eighth through 10th floors of the 15-story building, formerly known as 63 Madison Avenue, The New York Post first reported. A spokeswoman for the landlords—a partnership of George Comfort & Sons, Jamestown Properties and Loeb Partners Realty—said asking rents in the deal were in the low $90s per square foot.

Peter Duncan, Matt Coudert and Alex Bermingham of George Comfort & Sons handled the deal in-house for the landlords while Cushman & Wakefield’s Mark Boisi, Bryan Boisi and Richard Bernstein represented CBS. A spokesman for C&W did not immediately respond to a request for comment.

Duncan said in a statement that CBS “has been a valued tenant” in the building for more than two decades and the landlords “look forward to serving their office needs here for many years ahead.”

In October 2018, The Real Deal reported that Facebook was in talks to lease the entire 870,000-square-foot 28 East 28th Street between Madison Avenue and Park Avenue South. The social media behemoth passed and the Post reported in December 2018 that the company was in negotiations for space at SL Green Realty Corp.’s One Madison Avenue.

The building still has 218,000 square feet available, according to the landlords. Other tenants include textile manufacturer WestPoint Home, tech company Mark42 and subscription service Birchbox.