Allianz Teaming Up With Related in Its $2.2B Acquisition of 30 Hudson Yards 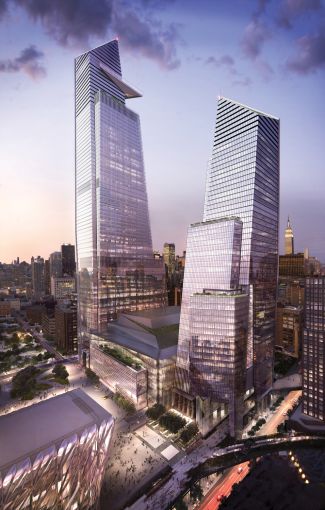 Related Companies has entered into contract to buy and lease back WarnerMedia’s office space at 30 Hudson Yards for approximately $2.2 billion, the landlord announced. The media conglomerate will continue to occupy the property through 2034.

German investment giant Allianz Real Estate will join Related in the deal, taking a roughly 45 percent stake in the asset, according to multiple sources with knowledge of the deal.

WarnerMedia bought its 1.5-million-square-foot office condominium at Related’s 100-story tower in 2014 as the site of its new headquarters.

In January it announced that it was putting the office condo up for sale, and Related was named the winning bidder shortly thereafter. The deal is expected to close in the second quarter of 2019.

AT&T, which acquired Time Warner last year for $81 billion, will use the proceeds of the sale to lower their debt, which totaled $170 billion at the end of 2018.

WarnerMedia has already begun moving its 5,000 employees in the New York City area into the shiny new office hub, and will consolidate its various arms at the new location for the first time, including HBO, CNN, Turner Broadcasting and Warner Bros. The 2.6 million-square-foot 30 Hudson Yards, located at the corner of West 33rd Street and Tenth Avenue, was designed by Kohn Pederson Fox. It will have the highest observation deck in the Western Hemisphere, jutting out 65 feet from the tower’s facade.

This isn’t Allianz’s first investment at Hudson Yards; in 2016, it acquired a 44 percent stake in 10 Hudson Yards for $420 million, buying out both Tapestry (formerly Coach), and the Kuwait investment authority, in a deal that valued the building at $2.15 billion.

Tapestry also entered into a sale lease-back deal at the time, selling its 738,000-square-foot space for $707 million. The fashion company was the first tenant to sign on to Hudson Yards in 2011 and spent $750 million on it space, according to the Wall Street Journal—$520 million to buy it and $230 million to build it out.

Time Warner did a similar lease-back deal with Related at the Time Warner Center in 2014, its corporate headquarters until now. The media giant sold its stake at 10 Columbus Circle to a joint venture between Related, the Abu Dhabi Investment Authority and Singapore’s GIC for $1.3 billion, Commercial Observer reported at the time.

Cushman & Wakefield’s Doug Harmon, Adam Spies and Kevin Donner represented WarnerMedia in the deal, a spokesman for the brokerage confirmed. It is the city’s largest deal since Google’s $2.4 billion purchase of Chelsea Market, which closed in October 2018, also brokered by the Cushman team.

Officials at Related, Allianz and AT&T declined to comment.