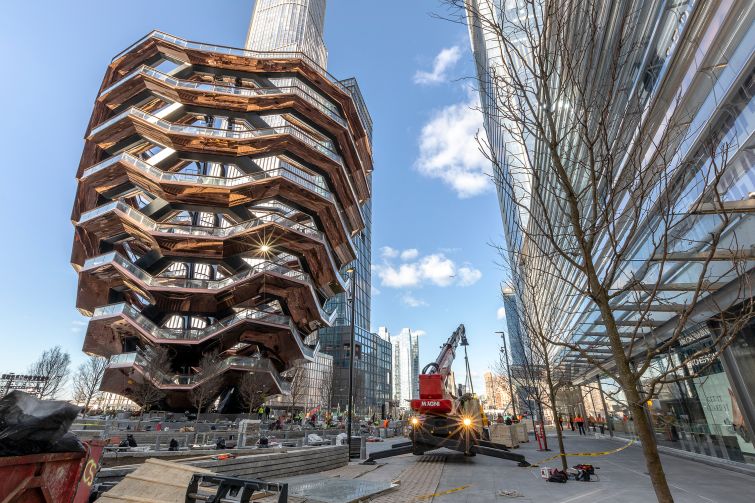 Decades of planning and years of construction finally culminated last week when the massive $25 billion, 28-acre Hudson Yards opened its first phase, taking over one of the final large parcels of empty space left in Manhattan.

Hudson Yards—built over a working Metropolitan Transportation Authority rail yard—is essentially a city-within-a-city created by Stephen Ross’ Related Companies on the West Side. It includes condos starting around $2 million and climbing up to $32 million, an eatery from famed restaurateur Thomas Keller, a beehive-like sculpture called the Vessel and headquarters for companies WarnerMedia and Coach.

“The brokerage community knows about it, corporations know about it, but I think if you go to the average person in New York that’s unaffiliated to this business, they still don’t really understand what Hudson Yards is about or maybe even where it is,” said Jeff Blau, the CEO of Related. “[When] the public is able to access this and see what was created here—climb the Vessel and the plaza—I think they’re going to be blown away.”

All told, Hudson Yards will have 18 million square feet of commercial and residential space, more than 100 shops and restaurants, a cultural center called The Shed, the first hotel run by fitness chain Equinox and 14 acres of open space.

But the journey from a barren rail yard to Ross’ Emerald City was hardly a simple one. Ross had to beat out four other developers, outlast a recession, lose a partner, battle the city’s construction unions and figure out how to build skyscrapers on top of a working rail yard.

“It seemed like forever,” said Jay Cross, a president at Related. “But when you look around the world, we moved at lightning speed to basically start with nothing and open with close to 11 million square feet. It’s pretty extraordinary.”

The project was equally important to Mayor Michael Bloomberg, who helped move it along and spent $2.4 billion to extend the 7 train to it. It was a chance to modernize the city’s aging office stock and bring life to a desolate section of the city, something administrations since Mayor Robert F. Wagner couldn’t do.

It’s also yet another symbol to a city knocked down by the September 11 attacks that it can bounce back and remain the Capital of the World.

“There was concern about New York’s long-term viability, there was a belief that New York needed to build again and to look towards the future again,” said Seth Pinsky, an executive vice president at RXR Realty, who helmed the New York City Economic Development Corporation from 2008 to 2013. “Hudson Yards was the opportunity to make a big statement about the future of the city.”

Bloomberg and Ross were hardly the first people to see the potential in the plot of land at West 30th and West 34th Streets between 10th and 12th Avenues.

After being home to a military fort (whose name was lost to history, if it ever had one), the area around West 34th Street became part of the Hudson River Railroad in 1849, Curbed New York reported. When Penn Station opened nearby in 1910, developers started looking at the area as a potential new spot to build offices, New York City historian Kevin Draper said.

“Everything that’s being developed now, that was the hope and the dream of these developers 100 years ago,” Draper said. “They thought that this was going to be the center of New York.”

Largely due to Grand Central, builders set their sights on Midtown as the next business hub instead. But, Draper added, “you could’ve flipped a coin at which neighborhood would’ve been more popular.”

One of the earliest ideas for the site was perhaps even more ambitious than Hudson Yards. The prominent New York developer William Zeckendorf wanted to build a $3 billion airport that would take over a whopping 144 blocks on the West Side, from 71st Street to 34th Street, according to Untapped Cities.

The land remained basically unused until the 1970s, when Nassau County Senator John Caemmerer came up with a plan. Long Island Railroad cars often traveled back empty to Long Island in between rush hours because there was no storage space in the city and Caemmerer saw a solution in the plot of land, according to Curbed.

The MTA opened the nearly $200 million, 26-acre John D. Caemmerer West Side Storage Yard, commonly called West Side Yards, five years after his death in 1986, The New York Times reported. It had space for 320 trains, 30 tracks and the MTA would sell the air rights to fund future capital programs.

Proposals throughout the years using the air rights included the land being part of President Donald Trump’s failed 77-acre Television City project, a site for a new Madison Square Garden and the home of the Bronx Bombers.

But it was investment banker and Bloomberg’s deputy mayor for economic development Daniel Doctoroff’s vision that gained the most traction. Doctoroff wanted to entice the International Olympic Committee to host the 2012 summer games in the city.

He released a nearly $3 billion plan in 2000 which included building a 75,000-seat stadium on what’s now the second phase of Hudson Yards, extending the 7 train and using the eastern section for office and residential development, the Times reported. The stadium would be turned over to the New York Jets after the Olympics, who wanted a home away from Giants Stadium in New Jersey.

“It was very unusual then for two N.F.L. teams to share a stadium, particularly a stadium that was named for another team,” said Cross, who tasked with finding a stadium site for the Jets. “The Olympic bid for was a perfect solution.”

However, the plans were fiercely opposed by politicians, including disgraced Assembly Speaker Sheldon Silver, and ultimately died. But while Bloomberg and Doctoroff failed to get the Olympics, they still easily pushed through a rezoning for the office and residential plans in 2005.

“People were so focused on the stadium and the controversy surrounding it, the rezoning itself was relatively non-controversial,” said Pinsky. “There probably has rarely been an upzoning on this scale that garnered less public opposition.”

Armed with the rezoning, the city put out a request for proposal in 2007 for developers to buy the air rights from the MTA and build over the rail yards. The city would still extend the 7 train to the site.

Five developers—including Extell and Brookfield—vied for the chance to nab the air rights and Related secured a deal with Rupert Murdoch’s News Corp. as an anchor tenant for its retail forward plan.

“The thinking was that the retail would create the destination right off the bat,” said Cross. “That flowed from our experience at Time Warner Center.”

At the last second, Murdoch pulled out of the deal and Tishman Speyer won it in 2008, offering $1 billion for the air rights, according to Blau and Crain’s New York Business.

But the economic downturn got worse, Tishman’s partner Morgan Stanley backed out and the sheer magnitude of the plan led Tishman to pull its bid five months later. Over the course of a frantic weekend (and while Blau’s wife was in labor with the first of his three children) Related agreed to take over the Hudson Yards project under the same terms.

“I was on the phone back and forth when all this was going on,” Blau said. “She still reminds me.”

A day after it won the bid, Related hired Cross to work on Hudson Yards. Despite the economic climate, the developer was still confident it could get Hudson Yards over the finish line.

“They were sort of hurting a little bit for not having won the first round,” Cross said. “We also felt, having just built Time Warner Center, we had Goldman Sachs, we were in pretty good shape.”

But Lehman Brothers filed for bankruptcy soon after and Related negotiated a deal with the MTA to delay ponying up the $1 billion until things got better. In the meantime, Related finalized the master plan and worked with the city to pass a rezoning for the second phase of the project in 2009.

“That was a good use of time,” Cross said. “We got more comfortable with the complexities of the project.”

Related saw some hope in 2010, but Goldman Sachs wasn’t as confident. The bank pulled out of the deal that year and real estate firm Oxford Property Group quickly took its place, Cross said. Related also began talks with luxury brand Coach to move its headquarters and become the first anchor tenant in the project.

Coach officially inked a deal in 2011 for 600,000 square feet in 10 Hudson Yards, Related paid the MTA the money for the air rights and got to work. Deals with L’Oreal USA, WarnerMedia and Neiman Marcus on the retail end later followed.

The project finally broke ground in 2012 but it was hardly smooth sailing from there. Building the nearly $2 billion platform over the rail yard was a logistical nightmare because the project needed to drill 300 caissons in the bedrock below the tracks but the MTA required the yard to remain operational the entire time.

“It’s like renovating your house while you live there,” Cross said. “It prolongs the pain.”

Even with the recession in the rearview mirror, its impact was still being felt. Banks were unwilling to lend money for the construction and Related had to find other sources, Blau said. It eventually got its first $470 million construction loan from Starwood Property Trust in 2013.

Building supplies, especially the glass curtain walls, became tougher to acquire since many manufacturers shuttered during the recession and the ones still around couldn’t keep up with demand, so Related opened its own 200,000-square-foot factory in Pennsylvania.

“We’re now in the curtain wall business,” Cross said. “Just to ensure we can get it ourselves.”

In 2015, the city finally opened the 34th Street-Hudson Yards 7 train stop, which proved to the business community that the project was actually happening and was a major achievement for the Bloomberg administration.

“Mayor Bloomberg came into office in 2002 and the 7 train was a dream on paper,” he added. “When he left, the 7 train project was designed, approved, financed and constructed. That’s pretty phenomenal, especially considering how little success we had on the infrastructure up until that point.”

Even with the first phase open, Related is far from over the finish line with Hudson Yards. Related just launch sales of the 143 condos in 35 Hudson Yards—with prices starting at around $5 million—and still have another 6.2-million-square-foot second phase on the western part of the Yards.